The Lowdown: Inside the 2015 NWSL Draft 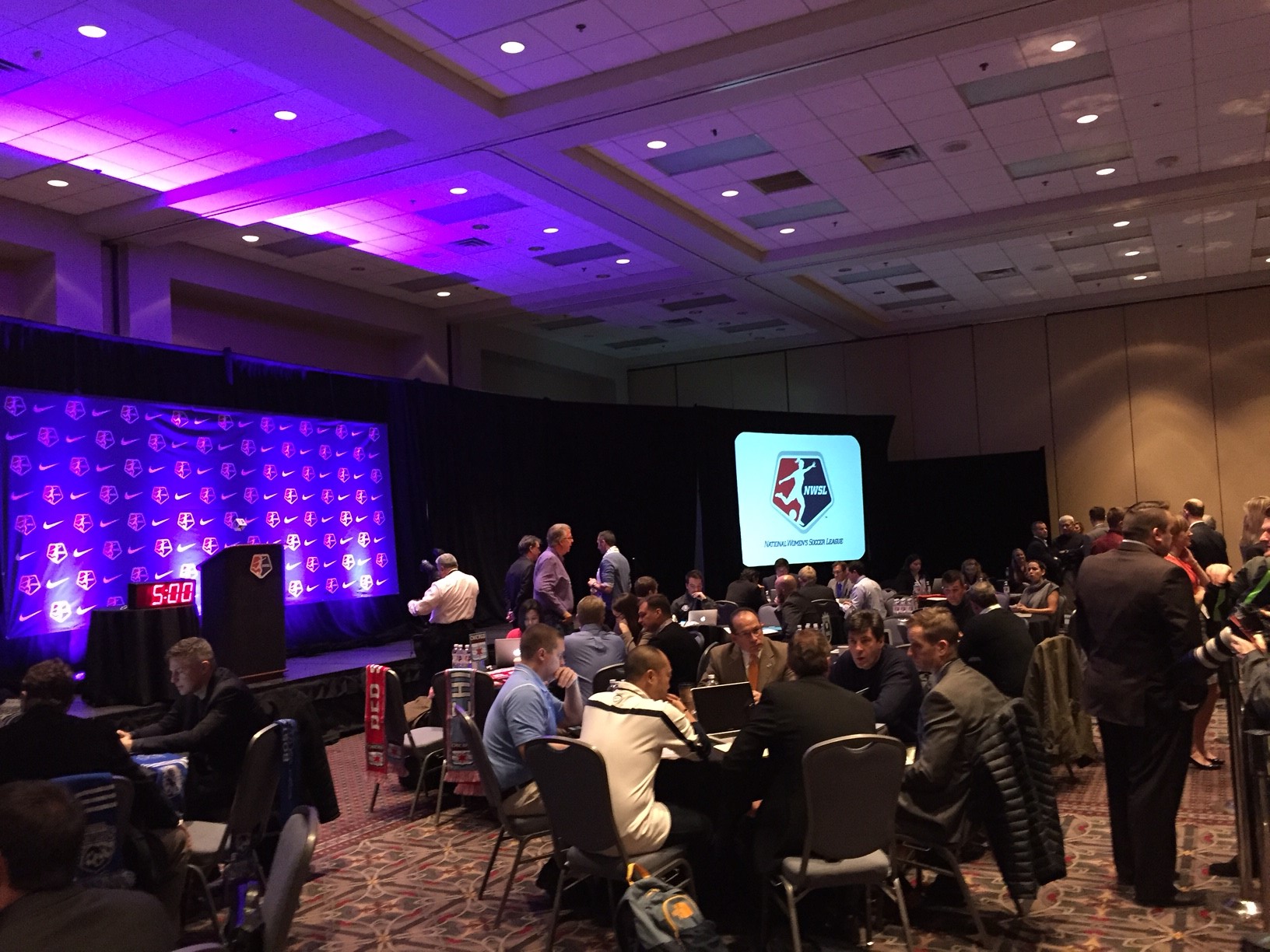 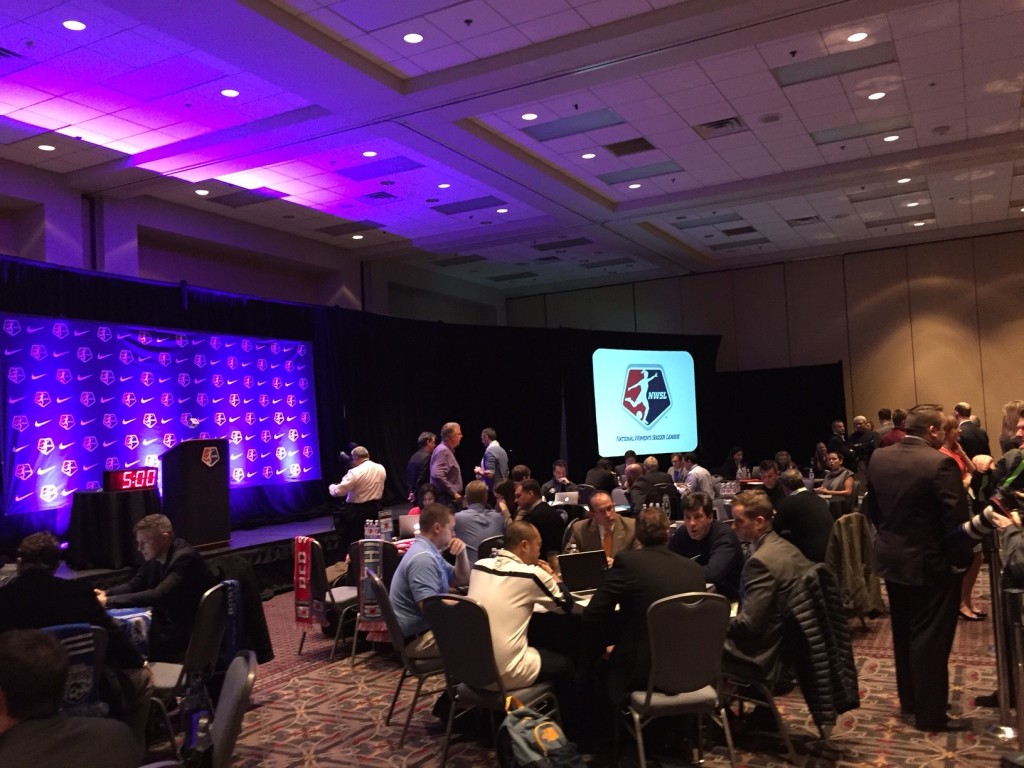 The calm before the storm of the NWSL College Draft room. (Photo Copyright Jeff Kassouf for The Equalizer)

PHILADELPHIA — When last week’s NWSL draft was over, nine coaches took turns standing in front of the background curtain decorated with league logos, and told the gathered media how well the day had turned out for them.  When Thorns’ coach Paul Riley was finished he put his arm around Red Stars’ coach Rory Dames, turned to the writers and said, “This guy killed the draft.”

Dames looked anything but fazed by the compliment.  But the Red Stars have enjoyed success on draft day under Dames.  They took heat for taking Zakiya Bywaters over Kristie Mewis first overall in 2013, but they also have every player drafted in 2013 and 2014 still on their roster.  And when Dames went on the clock with the No. 5 pick last Friday, he held the key to the rest of the day in his hands.

The Breakers were hot on Kristie’s sister Sam Mewis, as well as Stephanie McCaffrey, both locals.  Mewis was a first-team All-American and went as expected at No. 4 to the Flash.  McCaffrey had been projected as an early 2nd-round pick but she was recently accepted into U.S. national team camp after the U-23s broke up.  With McCaffrey’s stock on the rise, Breakers coach Tom Durkin plotted out his strategy to bring her to Boston.

The Red Stars took McCaffrey at No. 5 and then watched as the Flash took Lynn Williams and Jaelene Hinkle to go with Mewis and Abby Dahlkemper.  (The Dash had started the day taking Morgan Brian and then Sky Blue grabbed Sarah Killion with a pick they acquired last year from the Breakers—who could have landed Mewis.)  The Red Stars had another pick at No. 8 and grabbed Arin Gilliland.  The Breakers had the No.9 pick and called timeout.

“We liked Steph a month ago,” Dames said. “So we liked Steph before all the national team stuff had happened. She’s different. Her ability to go 1-v-1 and get in behind lines is different, but we also liked Danielle (Colaprico) and we liked Sofia (Huerta) a lot, so we figured between Mewis and between Steph, Boston would probably want one of those. So if they came to us and wanted to do something and we could get the (No.) 9 and the 11, we would, and if we kept her we’d be perfectly fine keeping her. I think she’s a very good player.”

Despite Dames’ assertions, word is the deal was agreed to before the Red Stars ever handed in the card with McCaffrey’s name on it.  After consulting with the league, it was finalized.  McCaffrey’s rights went to the Breakers, and the Red Stars acquired the No. 9 pick plus the No. 11 pick.

On McCaffrey, Durkin said, “She was a pleasure to have in with us last summer (as a reserve).  She did extremely well so we knew that she would be a good fit.  She wants to be in Boston.  And she can play immediately.  That’s another thing that was important to us.”

At No. 9 the Red Stars grabbed Colaprico, much to the dismay of Sky Blue, who held the next pick. Colaprico spent time on Sky Blue’s reserve team the past two summers.

“I’ve never met Rory,” said Colaprico, who played with Brian at Virginia.  It is an unusual position for a Red Stars draft pick, many of whom played for Dames in their younger years.  In Colaprico’s case she played club matches with Dames on the other sideline.

With Colaprico off the board, Sky Blue went with defender Kristin Grubka at No. 10.  The Red Stars then took Sofia Huerta, who some had rated as the top forward in the draft ahead of McCaffrey and Williams.

At No. 12, FC Kansas City took Shea Groom.  The Blues were rumored to be one of the teams looking to trade up, but Vlatko Andonovski, another coach with a strong draft history, said Groom was the player he targeted all along.

“I could not be any happier with the draft this year,” he said.  “Even if we had higher picks in the 1st round we still would have gone with Shea.  It worked perfect for us.”

FC Kansas City had two later 2nd-round picks, which they used on Meghan Streight, part of the very good team at Texas A&M along with Groom, and Katelyn Rowland, the first goalkeeper off the board.  The trio will be attempting to follow in the footsteps of Erika Tymrak and Jenna Richmond, 2nd-rounders the last two years who were regular starters on last season’s championship side.  On Rowland, Andonovski said, “I think she has a future in this league and a future internationally.”

After the Groom pick, the draft took another turn at No. 13.  The Dash called timeout and huddled with several teams including the Thorns, who came into the day without a pick.  It looked like they were back in the game when they traded Jess McDonald to the Dash for the 13th pick.  But before the Thorns made a pick, another timeout was called.  As quickly as they were back in the draft, they were back out.  The pick was flipped to the Spirit for forward Jodie Taylor.  (The Dash also traded their 2nd-round pick in 2016 to the Thorns, who flipped it to the Spirit along with their own 2nd-round pick in 2016.  The Spirit then dealt both of those picks to Kansas City for the No. 19 pick, which they used on Caprice Dydasco.)

“We’ve been chasing Jodie for a while,” Thorns coach Paul Riley said.  “[She]’s a proven goalscorer.  I like that she was probably the forward that was offsides the most last year (by a 34-25 margin over the next player, Kelley O’Hara).  She sits on the last shoulder.  She’s dangerous.”

The Spirit were loath to give up Taylor, but their coach Mark Parsons cited that he, “couldn’t be confident that next year she returns to D.C.  I couldn’t tell you today that she wants to be in D.C.  So for us it’s a no-brainer.”  Parsons added that new signing Natasha Harding will provide much of the same skillset lost in Taylor.  Another international signing due to be announced this week or next is also expected to help the Spirit around the goal.

After all of the jiggering with the No. 13 pick, the Spirit landed on Megan Oyster, the fourth of six players taken from UCLA.  And they flipped the two picks from the Thorns into Dydasco, the final UCLA player off the board.

“You never know what happens, but I was extremely nervous,” Oyster said about waiting to be picked, particularly as No. 13 was drawn out over about 15 minutes.  “I think I can attack out of the back well.  I can bring the ball and start the attack from the back line.  I know that the next level takes a lot of strength and endurance and agility and I think I can brings those qualities as well.”

Parsons, who built a team that went from last in 2013 to the playoffs in 2014, believes the Spirit are close to being where he wants them to be.  He was also delighted to see All-American Whitney Church on the board at No. 30.

“No exaggeration, those three players were ones that we dreamed about the last few weeks,” Parsons said of Oyster, Dydasco, and Church—the only three players the club selected.  “We had different strategies on trying to get involved to get those players, the fact we got all three, I can’t believe it.  They’re going to be huge.

“We now have versatility and depth at all positions.  The way our roster looks now we have real strength in the core areas.  We have the characters that I think we need and will buy into us as a club and people that are really excited about being in D.C.  I don’t think you can ask for more.”

— Two of Sky Blue’s picks, Daphne Corboz and Chioma Ubogagu, could be heading overseas.  Corboz has a deal with Manchester City, but has also been accepted to grad school at Rutgers where Sky Blue plays home matches.  If Ubogagu stays she will be considered a draft steal at No. 28. She too could be headed to the FAWSL.

— A post-draft trade saw Rebecca Moros moved to FC Kansas City with an international spot heading back to Portland.

— New NWSL commissioner Jeff Plush announced the picks and then met the media for the first time.  He expressed confidence in where the league is heading, saying, “We’re going to build a sustainable league that is going to be here for the long term.  Something that people can aspire to as a player, that people can be excited to be a supporter of as a fan, that marketing partners can be excited to use as a platform to reach their customer base.  And at the end of the day, making sure (we’re) a good partner in the community.  A good civic partner that is part of being a beacon in a community.  Those are the things that make you successful long term.”

— On being a commissioner replacing Cheryl Bailey, who was executive director, Plush said, “Cheryl did a phenomenal job and did some things administratively that she is well more equipped than I am to do.  I’m certainly more on the brand, sponsorship, expansion, growth, visioning side.  I’ll really be focusing on how we build and grow the business.”

— Plush said the league is fielding calls from potential owners in several markets and will soon figure out the best way to go about expanding the league.

— The owners are expected to receive the latest version of the 2015 schedule this week, and the final version is expected next week.

— The Breakers made it clear they are still pursuing Sam Mewis.  The Flash say they will always listen, but that it will take a lot to pry away Mewis.

— The Spirit, Flash, and Reign all have international signings to announce in the near future.  Presumably the Thorns are also closing in on a new international since they acquired a slot for Moros. Portland’s player will not be headed to the World Cup.

— Paul Riley said the Thorns almost not making a pick is not an indication of an organizational philosophy to build the team through other means and that it was just the way it worked out this year.

— On the seemingly random Kaylyn Kyle move from the Dash to the Thorns, it went like this according to Dash coach Randy Waldrum:  Canada was looking for a spot to place Allysha Chapman and the Dash were interested.  The deal was that another team had to agree to take Kyle.  The Thorns stepped in for Kyle and Chapman went to the Dash.

— Reign midfielder Jessica Fishlock has an ankle injury and her German club Frankfurt said she will be out 4-6 weeks.