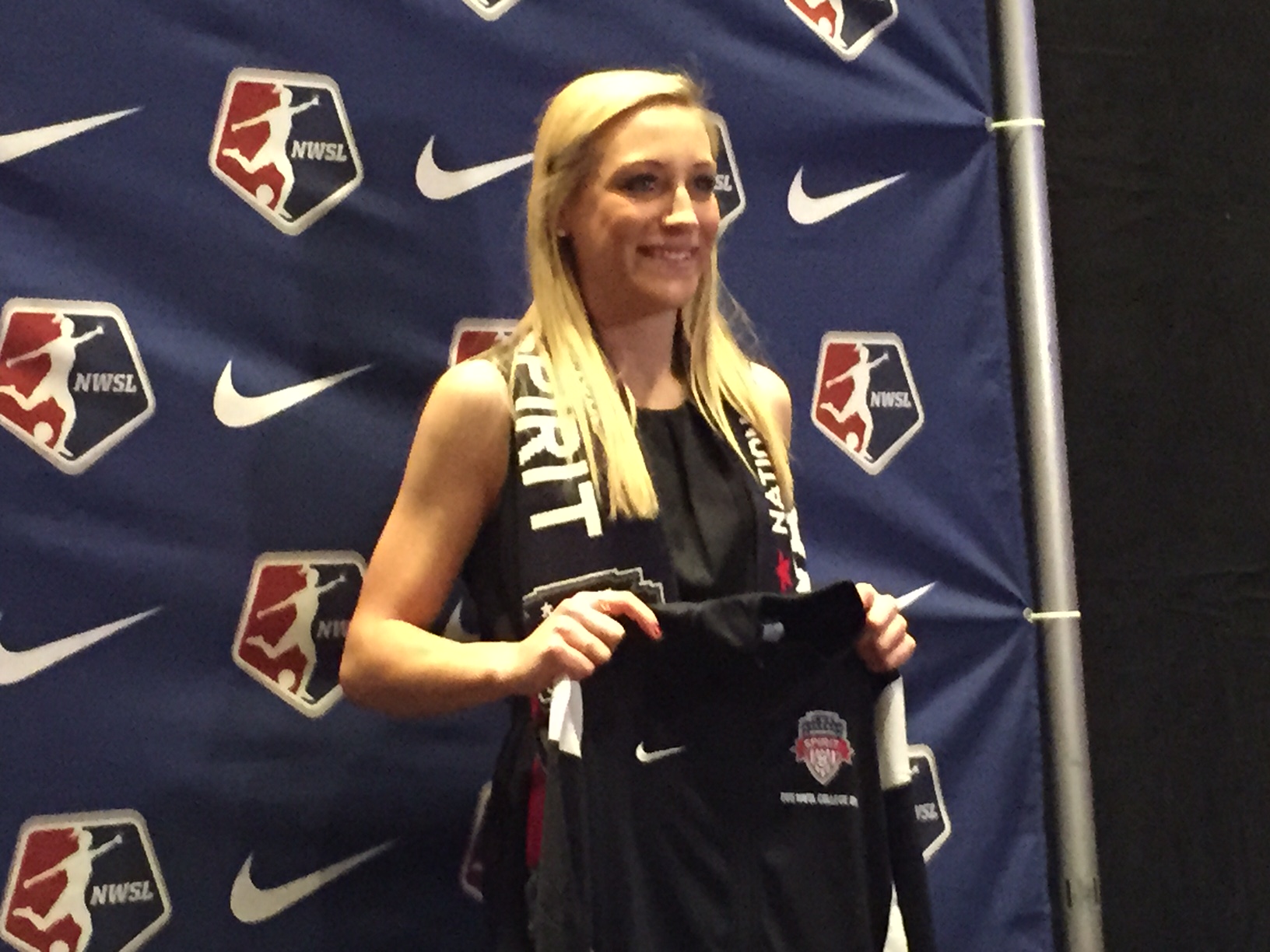 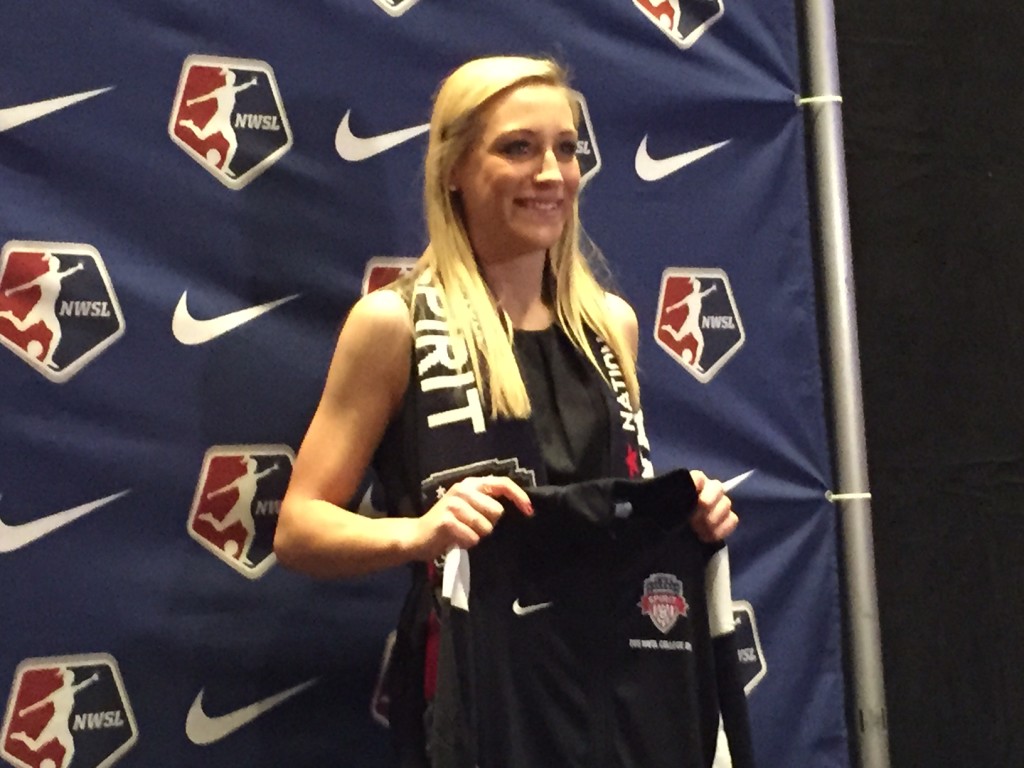 The Spirit traded up in the 2015 NWSL College Draft and landed Megan Oyster out of UCLA. (Photo Copyright Jeff Kassouf for The Equalizer)

Going into Friday’s NWSL College Draft, everyone knew there would be a lot of UCLA Bruins selected. Six of the first 19 picks were Bruins, tying a record.

What no one would have predicted was the selection of two of those Bruins by the Washington Spirit. At 9:30 a.m. ET on draft day, the Spirit held one lone fourth-round pick. By the time the proverbial smoke cleared, the Spirit had acquired Bruins Megan Oyster and Caprice Dydasco, along with Penn State’s Whitney Church.

In a surprising move, the Spirit traded English forward Jodie Taylor, the club’s leading goal scorer a year ago to Portland. In return, the Spirit gained a second-round 2015 draft pick and two second-round 2016 draft picks which the team parlayed into a third-round 2015 draft pick. Head coach Mark Parsons stated that he had no assurance that the English international would return to D.C., thus opening her up to the trade market.

Parsons admits he was aggressive in his trade strategy, a strategy that didn’t materialize until the morning of the draft.

“I think I spoke to the first person at 7:15 a.m. [Friday] morning and the strategy started at that point,” Parsons said. “I’m being really honest. It worked and we got the three players we needed. It could have very well gone the opposite way and we’d not have the three players we’ve got and we’d probably have some other young players that we’re excited about. I could never imagine we’d get the three we got…I’d say no chance because of the mechanics of how many things line up. So many lined up in our favor.”

With the acquisition of these players, the Spirit seem to have at least partially answered one of the biggest questions surrounding the team heading into the 2015 season: Where’s the depth on defense?

[KASSOUF:  Why Morgan Brian is U.S. Soccer’s next big star]

As all three of Washington’s U.S. allocated players are defenders, the Spirit’s backline will be heavily impacted by the build-up to the World Cup and of course the tournament itself. Even without the World Cup call-ups, Washington’s defensive depth has been a recurring concern thorough much of the team’s short history.

In Dydasco and Oyster, the Spirit acquire two cogs of the NCAA’s No.1 defense two years running. What the Bruins are known for is their ability to build the attack out of the defense effectively.

Oyster, who was a forward until high school, lists that the ability to help start the attack is one of her strengths. She’s probably best known for her pass to forward Kodi Lavrusky that set up UCLA’s game-winning goal in overtime of the 2013 College Cup final. Oyster was a surprise selection this high in the draft though as she only started for the Bruins for less than two years.

Dydasco is known for speed and her ability to get up and down the flank. Parsons called left back Dydasco “the most attacking defender out there” adding that he feels that she will make the team more exciting when they push forward.

With the only pick they held on the day prior to the draft, the Spirit selected D.C. area native Whitney Church from Penn State. The first-team All-American surprisingly was still on the board, prompting Parsons to call the selection a “no-brainer.”

The defensive midfielder turned undersized center back is composed on the ball and functioned as the “brain” of the Penn State back line. Perhaps more importantly, she’s known for her excellent distribution. The Spirit back line has made some costly errors in their defensive half while trying to turn up field.

On it’s face, it would appear the actions of the Spirit solved one problem by creating another. It appears that another new addition will be made to the attacking part of the roster soon. Parsons revealed on Friday that in addition to Wales international Natasha Harding — who Parsons called a well-rounded forward — the team is set to add another international striker.

“We’ve got another international coming in the next week who plays forward, plays up front that we’re really excited about that’s different,” Parsons said. “It’s not going to replace what Jodie brought. This player is a different type of forward. (She) gives us something that no other club in this league has.”

The Spirit’s build-up to preseason won’t stop here of course. Washington now starts the recruitment process for players who weren’t drafted to come into preseason or tryouts. Parsons said some members of last year’s Spirit Reserves are expected to be included in this process. Parsons hopes two of the team’s amateur call-ups from last year, Kelsey Pardue and Jennifer Skogerboe, are among them.

Parsons also mentioned Amber Stobbs, an English international forward who finished her career at Hofstra last fall. Stobbs suited up for Chelsea Ladies before college, where Parsons coached prior to moving to the United States.

The Spirit will hold an open tryout Saturday, February 21st for the professional team.