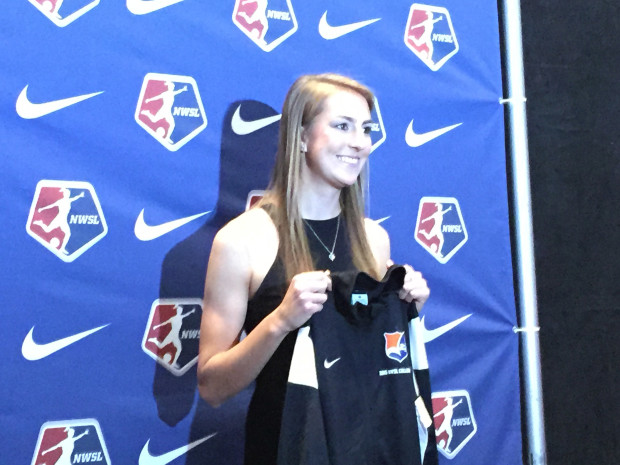 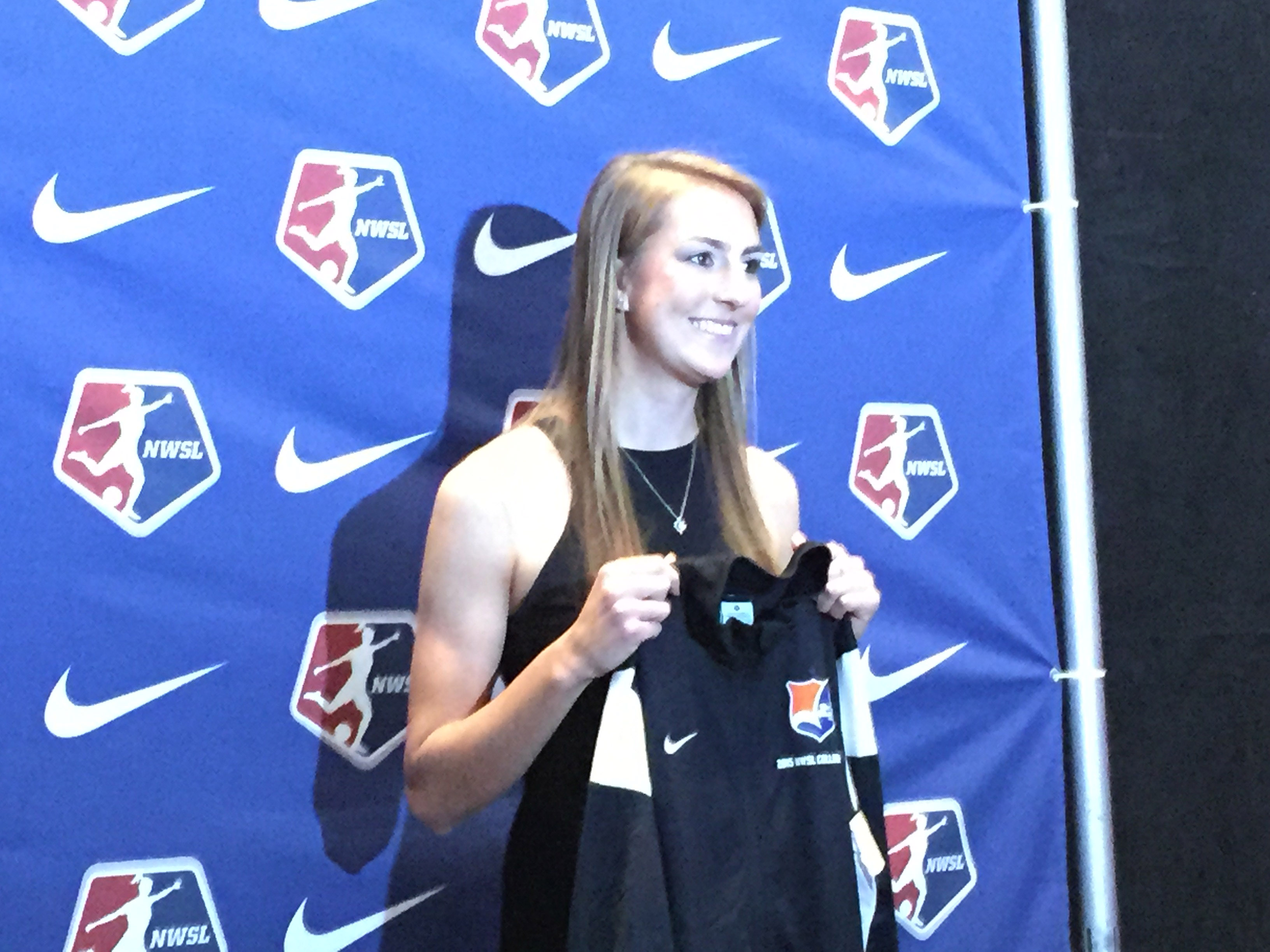 “These girls are very deserving,” she said after hearing Sarah Killion go No. 2 to Sky Blue followed by Abby Dahlkemper and Sam Mewis in consecutive picks to the Western New York Flash.  “They’ve proved themselves, especially over the last two years only losing two games and winning a national championship.  I’m super proud.”

Killion, the only one of the three on site, spoke about the excitement among the girls and about lining up opposite Dahlkemper.

“We were just all really excited.  We knew there was a high possibility of all of us going really high in the draft.  I’m so happy for Abby and I’m excited to play her now in the future.  That will be really cool…” As she spoke the Mewis pick was announced.  Killion motioned in the direction of the dais and added, “…and Sam.”

[KASSOUF:  Why Morgan Brian is U.S. Soccer’s next big star]

The Bruin parade did not stop with the big three.  By the time Megan Oyster went No. 13 to the Spirit, Katelyn Rowland No. 17 to FC Kansas City, and Caprice Dydasco No. 19 to the Spirit, a record had been tied that most though never would be. Six of the first 19 picks were from UCLA, matching the half-dozen North Carolina players taken with the first 19 picks in the 2010 WPS Draft.

Oyster, who was taken after a lengthy delay that included the pick being swapped twice, was on hand and saw her school go up on the board early and often during the 1st round.

“It’s just unreal to see every one of my teammates’ dream come true,” she said.  “It’s just a moment you’ll never forget.  There’s no great feeling than to see UCLA on the board with three of the top four picks.”

Of the three 1st-rounders Oyster said, “I knew they were going to go top five.  All of them.  They’re such good players.  They add so much to a team.”

Now that they have all been drafted, the next step will be adjusting to NWSL.  It could be baptism by fire for some of this year’s picks with so many absences expected due to the World Cup and its preparation.

“Really well,” Cromwell said about how they might adjust.  “They’ve been training at such a high level, competing against each other on a daily basis.  (They) also have a lot of youth national team camps under their belts.  So as far as the transition I think it will be seamless for them.  A lot of them will be starters.”

Cromwell believes the parity in the modern college game makes it a fantastic outlet for players to develop now that the matches are more competitive than ever.  “You saw this year, Texas A&M, Florida State, and probably UCLA all had their best teams maybe ever.  So it was a collision course of some very talented teams.  The games week in and week out are very good games.  It just helps develop them for the next level and getting into the pro league.”

Of the sextet, Mewis is the most advanced with an international cap and her participation in the ongoing camp.  “Her confidence has just skyrocketing.  I can see her having a huge impact on the league.  Abby Dahlkemper, the league is going to help her with her national team pursuit because I think she is the center back of the future.  And then you have Sarah Killion who is one of the most composed, skillful players out there.”

Cromwell, herself a veteran of the national team and WUSA, believes all six of them can reach the heights of the U.S. national team.  “I’m excited to watch them continue their careers.”