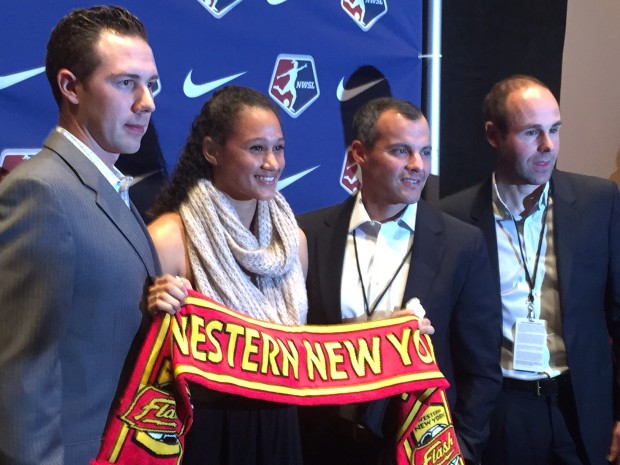 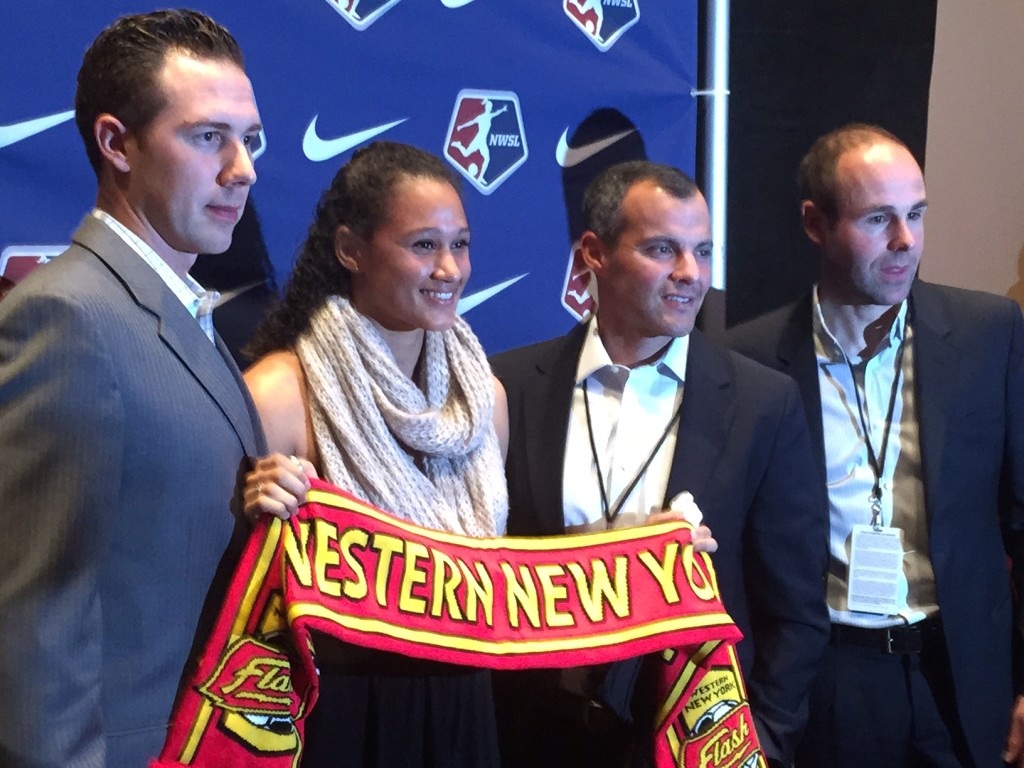 Lynn Williams, the No. 6 overall pick out of Pepperdine, was one of four players to go to WNY in the first round. (Photo Copyright Jeff Kassouf for The Equalizer)

PHILADELPHIA — The Western New York Flash hogged the 1st round of the NWSL Draft on Friday.  They may not have traded high enough to grab Morgan Brian, but in making four of the first seven picks, the Flash hope to have secured the necessary talent to leave last year’s lost season behind.

“I don’t know if exactly back then when we made the moves that these were the exact names in the spots, but we feel very confident about these players,” technical director Charlie Naimo said.  “All four of our (1st round) picks have either played for me or played against, so I know what kind of kids we’re getting and the kind of dedication that they have.”

Here is who the Flash will leave Philadelphia with:

— Abby Dahlkemper, the soul of the UCLA defense.  Dahlkemper played for Naimo at L.A. Blues last summer and made an impression not only with her play but her professionalism.  “A lot of times you’re competing with college.  They have demands.  They have school.  They have weights.  They have all these things and it’s very easy for them to say they can’t make it to practice.  They always showed up.  All those UCLA kids, they were always there.  (Abby) has been a selfless professional as a young kid since the day I met her.”

— Sam Mewis, a teammate of Dahlkemper at UCLA currently in camp with the U.S. national team.  “She has some of the traits that Carli (Lloyd) had for us.  She’s a north-south player with two cannons as a right and left foot.  She can score from distance, and now what we got in front of her is we added forwards that can stretch the field that are going to give her space underneath to play that role as good as she possible can.”  Naimo and coach Aaran Lines may be fielding some calls to see about a trade for Mewis.  Naimo said he would have to listen if a good offer came along, but added, “It’s going to take a lot.”(Mewis was included in Naimo’s praise of UCLA players, but she did not play for the Blues in 2014.)

— Lynn Williams, a goal scorer from Pepperdine.  “I think she is going to be a top four forward in the U.S. in the next two years.  Maybe the next cycle we’re going to hear a lot about this kid and the versatility and the tool box that she has.”  That is high praise, but Williams also became a 1st-round pick after not being heavily recruited out of high school.  Williams will stay at Pepperdine through her graduation on May 2, but she plans to look into speeding that up.

— Jaelene Hinkle, part of a fantastic defense at Texas Tech.  Naimo called her the best true left back in the draft.

Owning four 1st-round picks does not come cheap.  They traded Samantha Kerr to Sky Blue to acquire the No. 4 pick.  The No. 6 pick came from Washington with Jordan Angeli and at the expense of Angela Salem and Katherine Reynolds.  The No. 7 pick had been acquired in an earlier deal involving Kathryn Williamson who was shipped back to Portland with McCall Zerboni for Amber Brooks.  In other moves, the Flash sent Lloyd to Houston and brought back Becky Edwards and Whitney Engen.  There was also the exchange of goalkeepers with the Spirit – Kelsey Wys out, Chantel Jones in.

“In the beginning it was about accumulating more assets because we didn’t have a whole lot of assets that were tradable and moveable.  And then we had to shift our focus to need based things,” Naimo said.  “For this particular draft—I’ve been doing this a long time—there has never been a better draft in my opinion than there was today.”

The Flash have an international signing announcement coming in the next week or two so the roster should improve some before opening day.  Naimo brushed off a question about team expectations by saying, “the best players will play.”  But the short-term success of the Flash will ultimately depend on how well Naimo was able to read and defeat the 2015 draft.

“Ultimately,” he said, “we feel we have a group of (about) 20 players that can all make an adjustment and do something to impact the team.”