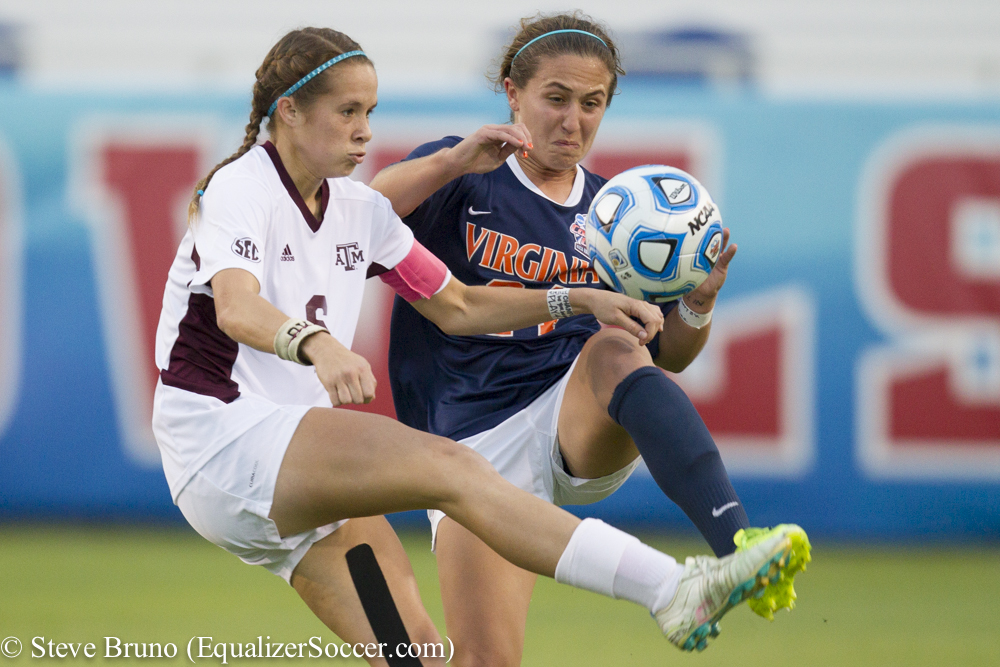 Shea Groom (left) is one of six Texas A&M players in the 2015 NWSL Draft. (Photo Copyright Steve Bruno for The Equalizer)

Texas A&M’s best season ever came to an abrupt end a game short of the final in December, a bittersweet ending for a senior class with a school record 75 wins in four years.

The trip home to College Station, Texas, was a somber one, but within days of that 3-1 loss to Virginia on Dec. 5 in the national semifinal, a new team — something of a self-made professional combine — had begun.

“We call ourselves the draft team,” says midfielder Shea Groom, one of six A&M players declared for Friday’s NWSL Draft. “We’ve been training together [since the end of the season] and we can still go through this journey together no matter where we get drafted.”

Midfielder Allie Bailey, forward Bianca Brinson, goalkeeper Jordan Day, forward Kelley Monogue and defender/midfielder Meghan Streight also declared for the NWSL Draft out of Texas A&M. Monogue led the Aggies in goals (18) and assists (10) in 2014. But Groom seems the most likely of the six to be drafted in the first round. She scored 41 goals in 85 career matches with the Aggies.

Without a doubt, the resumes of the six hopeful Aggies were boosted by finally making it to the big stage — the College Cup — in December.

“It was a really cool opportunity for our school but also for us to be in front of pro coaches and put our names on the map,” Groom said.

Groom was a semifinalist for the prestigious MAC Hermann Trophy award and a first-team All-American in 2014. A native of Liberty, Mo., Groom’s prospects of playing close to home with reigning NWSL champions FC Kansas City are appealing, she admits. Chicago is also purportedly a possible landing spot, possibly with the No. 8 pick if the Red Stars don’t trade down. And Houston, set to take Morgan Brian with the No. 1 overall pick, is only 90 minutes from where Groom played college soccer. The Dash don’t pick again until No. 13, and they need a goal-scorer.

Now Groom hopes to learn from the world’s best players and make it at the next level, a jump that has proved difficult in past years for even MAC Hermann Trophy winners.

“You kind of get comfortable where you are at in high school or college, so I am just ready for the next level,” Groom said.

She’ll be in Philadelphia on Friday with her family to find out her next destination on the journey.