The Lowdown: Morgan Brian, then what? 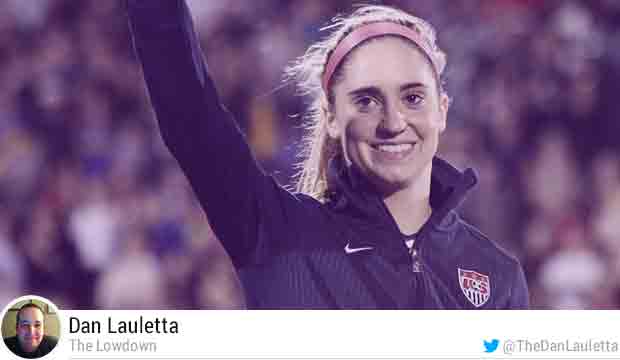 The third NWSL draft is Friday morning in Philadelphia.  It is the second straight year being held in Philadelphia and it is the second straight year there will be little drama surrounding the top pick.  The Spirit were all over Crystal Dunn last year and barring a stunning turn of events the Dash will be selecting Morgan Brian with the top pick this year.  It may be awhile before Brian, widely projected to be heading to the World Cup, can contribute regularly in Houston, but she projects as a dominant midfielder at the league level.

Behind Brian is one of the more fascinating drafts we have seen in women’s soccer.  New Flash technical director Charlie Naimo came to the job intent on a radical rebuild and as such he has stockpiled four of the top seven picks.  That gives Naimo and the Flash much control over the opening portion of the draft after the Dash take Brian and Sky Blue executes the No. 2 pick.  The Flash own picks 3, 4, 6, and 7.  The Red Stars are the sandwich pick at No. 5 and also hold the 8th spot.  The Breakers round out the opening round at No. 9, one of their seven total picks.  That leaves the Spirit, Thorns, Reign and FC Kansas City—the four playoff teams from last year—to sit out the 1st round.

The possibility remains that the wheeling and dealing with 1st round picks is not over.  The focus on a trade would appear to be on the Red Stars’ No. 5 pick.  In November, Rory Dames told The Lowdown that other clubs were aware the Red Stars were open to trading either of their 1st round picks.  The club has been cagier as draft day has approached but they have also sent some teasing tweets about the uncertainty surrounding their draft moves.

Here is a look at each team and some needs heading into the 2015 draft:

A few teams made early inquiries about trading for the top pick, but the Dash are set on taking Brian at No. 1.  After that they will have to wait and see what transpires ahead of their next pick at No. 13.  What they really need is someone who can score, but that is the most difficult commodity to find in young players and striker looks to be the weakest link in this draft.  Otherwise the Dash are likely looking to add depth, so unless Randy Waldrum—a longtime college coach and astute evaluator—believes he has a hidden gem it will likely be filling some needs for depth in anticipation of Brian, Carli Lloyd, and Meghan Klingenberg missing time for the World Cup.  Then again don’t put it past Waldrum to uncover a 2nd-round sleeper.

Jim Gabarra told The Equalizer last week that if he were drafting that day his pick at No. 2 would probably be Sarah Killion.  If so he would look to team the UCLA midfielder with Katy Freels to add some dynamism to an attack that was too often stale in 2014.  Another school of thought is to grab Killion’s college teammate Abby Dahlkemper as an heir apparent to Christie Rampone.  But this is a win-now league and if Sky Blue feels Rampone can help them in 2015 the pick is more likely to be a midfielder.  At No. 10, Gabarra may be able to snatch one of the better forwards on the board.  Stephanie McCaffrey is unlikely to get by the Breakers at No. 9 unless they use that pick to trade up, and Sophia Huerta is also a good bet to be off the board before Sky Blue’s pick at No. 10.  Goalkeeping is thin with Brittany Cameron crashing back to earth and the retirement of Jill Loyden so don’t be shocked to see Sky Blue go that direction with one of the later picks.

As things stand the Flash will make four picks before four of their right foes go on the clock, and six picks before the Spirit or Thorns get a selection.  They traded away significant talent to stock up on the 1st-rounders so Naimo will have to make the best of them to make good on his gambit.  The smart money has the Flash taking Dahlkemper and Sam Mewis with the first two picks with Killion as a suitable consolation if Sky Blue upsets the apple cart.  But the biggest hole in Western New York is at forward.  Sofia Huerta is considered the best forward on the board and just gave up a chance to play for Mexico to try her luck in the U.S. program so motivation should be high.  It will be tough to pull off but it won’t be impossible for the Flash to leave Philadelphia with six new starters, especially during World Cup absences.

The Red Stars are the most fascinating team in the 1st round because they could be looking to move down and there are certainly teams looking to move up.  After two years of easy 1st-round picks, this time around Rory Dames is not necessarily looking for someone to move right in and start.  The Breakers would love to move up from No. 9, especially if Mewis slips out of the first four (unlikely).  If the Red Stars hold both picks they could take anyone from Huerta to Shea Groom or Kristin Grubka.  No team has equaled the Red Stars for late-round picks so don’t sleep on their other three or be surprised if they trade down.

Breakers’ fans will be smarting early on when they remember the team dealt what turned out to be the No. 2 pick for Lisa De Vanna, who was a malcontent before being moved for Bianca Sierra mid-season.  But four top-20 picks is nothing to sneeze at and every indication is the club is looking to move up from No. 9 if they can find the right deal.  Tom Durkin is looking for a right back, but the guess is he jumps on McCaffrey unless her recent camp call-up prices her out of range at No. 9.  Look for a right-sided defender to be the pick at 11 or 14.  The Breakers are another team thin at goalkeeper, especially if Alyssa Naeher makes the World Cup roster.  And they certainly have enough picks to take a flier on one of the top college keepers, perhaps UCLA’s Katelyn Rowland.

After winning the NWSL Championship, Vlatko Andonovski joked that he was fine without a 1st-round pick because he had enjoyed so much success with his 2nd-rounders.  That is the round he acquired Erika Tymrak in 2013 and Jenna Richmond in 2014, both of whom started in the final last August.  Can he do it again with four picks between 12 and 19? At the moment it does not look like the Blues are looking to trade up but there remains a chance they are holding a trade-hand close to the vest.  They basically need depth all over the field, and that is exactly what Andonovski said his club was looking for on draft day.

What a difference a winter makes.  The Reign have been eerily quiet this offseason and barring an unlikely trade, will be quiet again on Friday.  And they’ll need to reverse the karma of the No. 15 pick since neither of the first two—Mallory Schaefer and Haley Haagsma—have played a minute in NWSL. (Haagsma was injured and is still on Sky Blue’s roster.)  The Reign won the regular season last year with an aggregate 377 minutes played by players they drafted in 2013 and 2014.  So they have clearly found ways to survive without thriving on draft day.

A recent Facebook interview with Thorns owner Merritt Paulson indicated these two picks have been traded.  No announcement yet but it appears the club is okay with the idea of sitting this one out.

The Spirit are loaded with both talent and questions as they head into 2015.  They won’t be able to answer many questions with the lonely 30th pick, and that might be the best way to approach things.  They do have some defensive and midfield pieces they could use to orchestrate a trade up the pecking order but they would be hard-pressed to bring back equal value in such a transaction.

— FC Kansas City’s move to Swope Park and partnership with Sporting Kansas City can only be good news.  The club struggled to attract fans to Durwood Stadium, which they leave behind with the legacy of having housed a championship club that stayed undefeated at home.

— The Breakers are not expecting Kia McNeill back with them, a year after her abrupt departure just ahead of training camp left the defense with a hole that would never be completely filled.

— The announcement of the league’s nine home openers at the same time the Ballon d’Or was a tone deaf move from a league that has never been great at when and how to announce news.  In case you got caught up in the confusion, Abby Wambach finished third behind Marta and the winner, Nadine Kessler.  And the home openers are here.

— The full list of players eligible for Friday’s draft is here.