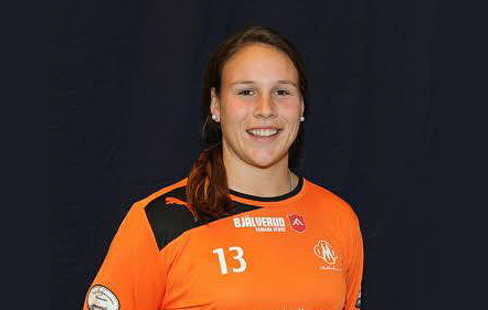 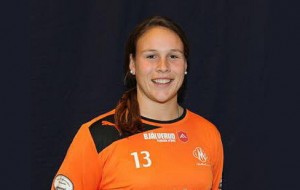 American goalkeeper Katie Fraine is making a name for herself in Sweden.

Linköpings FC had a successful season in Sweden’s Damallsvenskan during the recently completed 2014 campaign, finishing with 11 wins, 5 draws and only 4 losses for 38 points. Linköpings finished just one point behind third-place Kopparbergs/Goteborg FC (39 points) and four points out of a Champions League berth next season, as KIF Orebro finished with 42 points. FC Rosengård (formerly Malmo FC) dominated the table, capturing the league title and a Champions League berth with 54 points from 18 wins and only two defeats. FC Rosengård lost to Linköpings FC in round four, 2-0 away and again in round sixteen, 3-2 in the home return. Linkopings FC won its lone league title in 2009 but has captured the Swedish Cup the past two seasons.

American Katie Fraine started 18 of Linköpings’ 20 regular-season games in goal. Fraine, a graduate of the University of Florida, was selected in the 2011 WPS College Draft by the Washington Freedom, who soon became magicJack, and played sparingly that season for the Atlanta Beat. She then went to Europe to join Swedish second-division side Mallbacken. After two seasons there (one in the top flight), she transferred before the 2014 season to Linköpings.

She described her time at Linköpings as “a great opportunity and experience for me thus far.” Despite a young team in Linköpings, Fraine feels that they are structured on the field through their coach, Martin Sjogren.

“We are a well-organized team and have a strong future,” Fraine said. “The season has had its ups and downs, and although we have had great success winning the Swedish Cup and defeating some of the other highly-touted teams in the league, we have struggled a bit in the end of the season and won’t be finishing as high as we hoped.” Linköpings captured only 5 points out of 12 during their last four games, which put pad to their bid for a Champions League spot.

“Overall, I would say that my play has been solid,” Fraine said. “I believe I have set myself up for success in the upcoming games as well as for next year. I signed a two-year contract with Linköping in October of 2013 so I will be competing with the team again next season and look forward to a strong push towards winning the league next year.”

Fraine discussed her future plans, including coming home to play professionally in the United States: “I hope in the future to go home and compete in the States but for the time being I am happy with my situation and look forward to winning more games here. I really enjoy playing and learning in the European system. It allows me to spend time learning the game better and I feel that I have developed tremendously in my time here.”

Fraine said she sees the differences in the style of play between Sweden and the U.S.

“The Swedish style of play can be very different from American soccer in many ways,” she said. “I find that the speed of play is often slower but teams attempt a much more tactically and technically inspired game [in the Damallsvenskan] as opposed to the often direct and pacey style in the States. As a goalkeeper, this allows me to be more involved in the attack as well as forcing me to be ‘on’ during the lulls. The Damallsvenskan is home to some of the best players in Europe and all around the world and that talent provides for an extremely high level at every practice and game.”

Linköpings’ season is not over despite the Swedish league season ending on Oct. 19. Fraine and her teammates did compete in the 2014-15 Champions League this season, helping the club to the quarterfinals. Linköpings knocked out Liverpool 4-2 on aggregate in the Round of 32 and recorded a 5-3 aggregate victory over Zvedza 2005 of Russia in the Round of 16.

“Competing in the Champions League with LFC has been a dream come true for me and I can only hope that experiences like these will continue to have a positive impact not only in my play but also in my future as a goalkeeper,” Fraine said.

Unfortunately, in the first leg in Sweden against Zvedza 2005, Fraine was sent off in the 45th minute for bringing down Josee Nahi of the Ivory Coast in the box, after her club had established a 4-0 lead. Her substitute, Hilde Gunn Olsen, saved Daryna Apanaschenko’s penalty and the Swedish side ran out 5-0 winners in the first leg. In the return in Perm, there were some nervy moments as Zvedza pulled back three goals and Olsen received a late yellow card, but Linköpings advanced to the quarterfinals. (Rosengård is also through to the quarterfinals with a 4-1 aggregate over Fortuna Hjorring of Denmark—where defender of Chicago Red Stars Taryn Hemmings and forward Melissa Henderson of the Houston Dash are playing during the NWSL offseason.)

In the quarterfinals next March, Linköpings will face Brøndby IF of Denmark while Rosengård is drawn against Wolfsburg of Germany, the two-time reigning Women’s Champions League holder who defeated last year’s Swedish champions Tyresö 4-3 in the final last summer.

Despite her success in Sweden, Fraine has had limited involvement with the national team program. She was invited to a single U.S. U-23 national team camp in the summer of 2010, while still at Florida but she says “a girl can dream of future call ups.” She would qualify to play for the Republic of Ireland through her family but has not pursued that option. A player like Fraine, who really made her career in Europe, hopefully will have future national team opportunities. A deep run to the semifinals or even to the UEFA club finals should lift her substantially on the radar screen of other teams in Europe and NWSL sides.