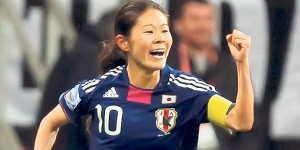 Homare Sawa says she isn’t retiring, but will she be at the 2015 World Cup?

Homare Sawa hasn’t been involved with Japan’s national team since an Asian Cup triumph in May, leaving her international career in limbo.

But Japan head coach Norio Sasaki may still have the 2011 FIFA Women’s World Player of the Year in his plans for the 2015 World Cup, as shown by Sasaki not handing out Sawa’s No. 10 shirt to any other player for two October friendlies against Canada (a win and a win).

The Japan Times reports that 36-year-old Sawa has her mind on the World Cup and not retirement, although her comments are fairly cryptic.

“If and when I start feeling satisfied about my career, then I think it’s time for me to hang up my boots,” she said.

But Sawa goes on to thank those who have touched her thus far. “I’ve been through a lot to get to where I am now, and I just want to thank everyone who’s touched my career,” Sawa said.

Sawa captained Japan to its historic an unlikely World Cup win in 2011, claiming the Golden Ball, Golden Boot and World Player of the Year honors for her efforts. She debuted for Japan at age 15 and is close to playing in 200 games for her country. She appeared for Japan in the World Cup in 1995, 1999, 2003, 2007 and 2011. She could become the first player to ever take part in six World Cups. She has also appeared in four Olympics.

Whether or not Sawa makes her way to Canada in June for the World Cup could be known come March, when Japan travels to Portugal for the Algarve Cup.

Correction: This article originally stated that Sawa was not part of the Asian Cup. She in fact played in four out of five matches.