The Lowdown: Red Stars seek gains on, off field 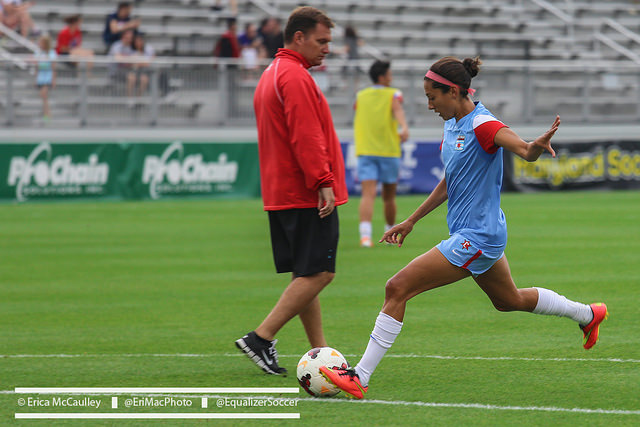 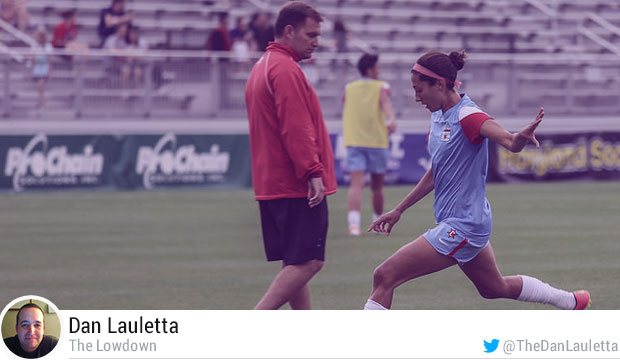 In two NWSL seasons the Red Stars have yet to make the playoffs, missing narrowly both years. They have also failed to make a significant impression at the gate, languishing near the bottom of the attendance table. Both of those scenarios could be set to change in 2015.

“We’re pretty happy with the roster we have,” Red Stars coach Rory Dames told The Lowdown in an interview the week of Thanksgiving. “But we’re always looking to make our team better.”

Thus far this offseason, Dames has not seen fit to make any major splashes in the trade market, though the other clubs have been made aware that one of the Red Stars’ 1st round draft picks—5th and 8th overall—can be had for the right offer. If Dames winds up keeping the picks, those clubs have a right to be concerned. Every player the Red Stars have selected in the last two drafts remains on the roster, from last year’s dual 1st-rounders Julie Johnston and Vanessa DiBernardo to 4th-rounder Jen Hoy.

“This will be the first year where I don’t think anyone coming out of the draft fills a major need for us,” Dames said. “But there are some good players in the draft that can help make us better overall as a team.”

That sentiment is more a statement of where the Red Stars are than it is about the draft, although Dames believes his No. 5 pick is one spot away from the first line of demarcation in available players. But even without adding more muscle on draft day, if the Red Stars can match the best of what they did in 2014 they will be a force to be reckoned with in the new year. They were among the best in the league through May before a summer slump left them too far gone to recover with a late surge.

“We had a lot of young players that bought in to what we were asking them to do,” Dames said of the quick start. And then the likes of Christen Press, Melissa Tancredi, Emily Van Egmond, and Shannon Boxx began trickling in. All good players, but…

Hoy’s season may have been a microcosm of the team’s. The former Ivy League star scored in four straight May matches—all wins—but not again for the remainder of the season. Dames dismissed the idea that Press’s arrival stunted Hoy, instead believing it was more of a physical breakdown.

“I think Jen just physically broke down a bit,” Dames said, noting that the scoring streak was part of a nine-game, season-opening stretch during which Hoy started and played beyond the 80th minute every time. Almost always she played as the lone striker.

“She was basically playing up front by herself so the amount of running that she had to do and the amount of ground she had to cover was tremendous,” Dames said. “And so I just think she physically broke down a bit.”

The Red Stars shut down Hoy from playing soccer in the weeks right after the season, and they hope to have a refreshed and fit striker heading into training camp in March. “We’ve got a better offseason plan for her,” Dames said. “We met with her and the trainers and got her off to a much better plan for this coming year. So I think she’ll be much better physically equipped to survive it.”

Generally speaking the 2015 season figures to be quite volatile with the U.S. World Cup roster sliding in for gameday cameos most of the season and Canadian participation—including prominent Red Stars Tancredi and Karina LeBlanc—in question. But considering how many Red Stars were either injured, pregnant, or tied up overseas for major parts of the last two seasons, the club figures to have unprecedented stability in season three of NWSL.

If things have been quiet in terms of roster moves they have been louder in the Red Stars’ front office. The club brought in six additional staff for the offseason in an effort to reach what general manager Alyse LaHue calls dramatically higher number targets. “It’s something we take very seriously and are making strides to create a larger fan base and presence in Chicagoland,” LaHue said in a recent email. The Red Stars averaged 2,949 fans in 2014, but that included a doubleheader that drew 15,743 fans.

While the additional staff should help with the ticket sales, a small but energetic supporters group is attempting to gain a foothold. Chicago Local 134 achieved its goal of having a presence at every Red Stars game last season and will look to increase membership and impact in 2015.

“By the end of the season we had a solid group of about 10 people who came on a regular basis, which for us more than exceeded our expectations,” Maggie Dziubek, who has co-organized the group for the last year, said. “We wanted to make sure that every home game there was someone there with a flag, someone there providing some kind of game atmosphere.”

So they’re not Portland’s boisterous and numerous Riveters. But they’re trying. That includes a virtual meeting prior to last season where members representing supporters groups from the other clubs—minus the Riveters and thee Dash, who were newly minted at the time—to exchange ideas about how to enhance supporters culture in NWSL. “A lot of the other groups had some of the same challenges. We were all kind of in the same boat. With the exception of Portland everyone else had sort of the same numbers and issues getting started,” Dziubek said.

Dziubek supports that claim. “Our front office was absolutely supportive. Anything we wanted they helped us out. Arnim (Whisler, Red Stars owner) helped us set up our first smoke bomb.”

Local 134 accounted for one of the goal line bleachers at Benedictine University Sports Complex. Dziubek said she would like to see membership spill into a second bleacher section for 2015. “We want to keep our ambitions manageable,” she added.

Dziubek and her group have found a bar, AJ Hudson’s, that allows them to gather and watch away matches as well as U.S. national team contests. They are also constantly trying to recruit new fans to the Red Stars and NWSL. One glaring issue, is the location of Benedictine in Lisle, Ill., far outside the city limits.

“We have to find ways to circumvent any obstacles that would keep people from coming to our matches and make it more convenient whether through pub-to-pitch buses or even general carpools like Local 134 does,” LaHue said. “There is a public transportation system that will get you from the city of Chicago to where we play, but it doesn’t drop you on the front step of the stadium, which is the same issue that Fire had for years.”

Speaking of the Fire, a season-opening doubleheader at Toyota Park, home of the Red Stars’ MLS brethren, was a rousing success in 2014 and LaHue says the clubs expect to have more doubleheaders in 2015. They are currently working on matching their schedules—easier said than done when it comes to NWSL. The club is also researching to see if they can paint over the football lines at Benedictine.

The current commitment to Benedictine is only through 2015 and the Red Stars continue to explore alternate options to bring themselves closer to their fan base.

Rory Dames is not one to dwell on specific moments. So he does not spend too much time reliving the benchmark sequence of the 2014 NWSL season. It was August 2 in Washington and the Red Stars and Spirit were locked in a 1-1 tie. Press got in with a spectacular chance to give the Red Stars the lead in the 89th minute, but Ashlyn Harris denied her with an even more spectacular save. Two points gone. Then came stoppage time and the beautiful, long-range strike by Yael Averbuch that gave the Spirit a 2-1 win. Three points gone, and a six-point swing in total. The clubs ended up level on points, with the Spirit earning the final playoff spot on the head-to-head tiebreaker.

“We got a corner kick and we sent an extra player forward,” Dames said, adding that he would do it the same way again. “They countered back and we did a great job of positioning back. The play (Diana) Matheson made on the sideline to slide and keep it in was just as impressive as the shot Averbuch hit. If you’re going to lose a game and you lose on that kind of a goal, so be it. But I don’t think that’s the defining moment that didn’t let us get into the playoffs.”

Other moments include the final game of the season against the Flash, when the Red Stars conceded three goals in 20 minutes to fall behind and despite a stoppage-time penalty by Johnston to salvage a draw, were eliminated from the playoffs. On Father’s Day against Sky Blue, Vanessa DiBernardo hit the post with a penalty just before halftime. It would have given the Red Stars a 3-0 lead. Instead Sky Blue scraped together two goals in the second half for a 2-2 draw.

“You go through the season, you can look back and find eight or nine moments in five or six different games,” Dames said.

Looking at 2015, the hope is that for the first time in NWSL, the Red Stars will be focusing more on developing a consistent lineup than figuring out who will be arriving when. One big question is where Johnson will line up. Her Rookie of the Year campaign included time at central defensive midfield and center back.

“It’s hard to take Julie out of the back line,” Dames said. “I think other than Becky (Sauerbrunn), Julie was the best back in the league last year. Julie reads the game extremely well. Julie is a tremendous problem-solver. Regardless of whether we choose to keep her in the back or move her into the midfield, we definitely have players that are good on the ball and can cover ground and read the game.

Once again, no drama surrounding No. 1 pick
It’s officially the year of the Women’s World Cup