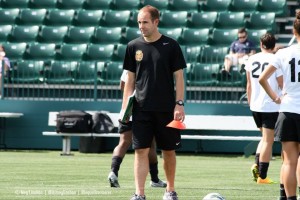 A year ago Seattle Reign FC went through an offseason overhaul that brought almost an entirely new roster to the Emerald City after finishing seventh of eight teams in the NWSL’s inaugural season.

The Reign turned around and rattled off a league-record 16 games unbeaten to start the 2014 season en route to the NWSL Shield and a spot in the final.

A year later, the Western New York Flash are doing much of the same. The Flash finished seventh of nine teams in 2014, ending a run of four straight trips to league finals across four different leagues. It was an unprecedented level of failure in Western New York, which over the last half-decade emerged as a major player in the women’s game.

So the Flash followed suit and cleaned house. Their roster, now only three months from preseason, is almost unrecognizable from the one that ended the season in August.

“Ultimately we can’t be happy with how we ended last year,” Flash head coach Aaran Lines said. “We’ve got to make changes that we felt are need and our roster is a lot better than it would be with those players on it.”

“We consider the deal a three-for-one,” Lines said of the Kerr deal, noting the extra international spot. Kerr is expected to miss significant time with Australia for the World Cup in June, as well as preparations for it. Kerr and fellow Australian Caitlin Foord — already at Sky Blue — made it known that they want to play together.

“We were able to build a World Cup-proof roster,” Lines said.

Defender Whitney Engen — when not with the U.S. — will anchor a back line that struggled in 2014, and Becky Edwards’ return to the Flash’s midfield is a welcomed one. Edwards was the glue to the Flash’s midfield in 2011, when they won the WPS title. A younger, still in-progress Engen was similarly solid for Western New York in 2011. She returns for 2015 as a U.S. regular.

Chantel Jones could end up the starter in net for Western New York. Adrianna Franch and the Flash don’t see eye-to-eye on a new contract. Lines says the club is open to talking and he feels “the best place for her to be is in the NWSL doing what she did in 2013.” Franch missed the 2014 season after tearing her right ACL in preseason. She is exploring options overseas.

The Flash will add significant talent with the potential to make immediate impact through the NWSL Draft. Western New York holds four of the nine first-round picks in next months NWSL College Draft, and with the Naimo link, it’s very possible more than one of the loaded batch of UCLA seniors could go to the Flash.

Lines vaguely said his goals in the draft are to find a player for each line: a center back, a central midfielder and maybe a striker.

Such extensive offseason moves could be viewed as gambles — gambles the Flash hope will pay off and have them playing in late September next year.

USWNT opponents and the year of no more fear
14 for ’14: Women’s soccer moments of the year