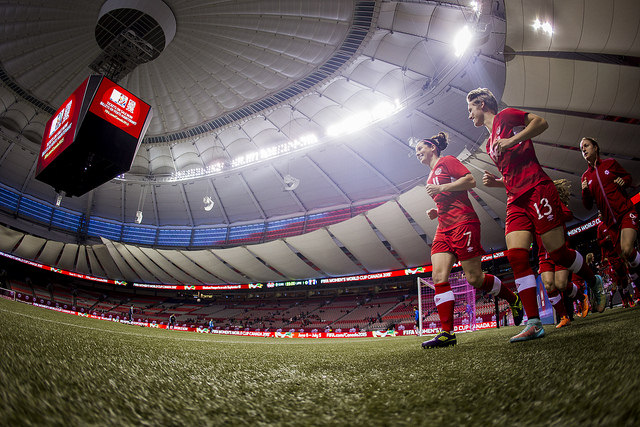 Canada hopes to be at BC Place for the World Cup final on July 5. (Photo: Canada Soccer)

VANCOUVER, Canada — Now that the group stage matches and venues are set following the FIFA Women’s World Cup Draw, the real work begins as all 24 teams train and prepare for the group stage and beyond. John Herdman has his team working through a rigorous final week of training on the West Coast before a holiday break.

China, New Zealand, and the Netherlands will all offer different challenges, tactics and strategies that Canada will have to overcome if they hope to succeed in Group A. Women’s soccer is continuously growing all over the world, and teams are developing and getting much more stronger. Erin McLeod is pleased to see growth in the sport and she is excited about the draw Canada has been given.

“I was really happy with the draw,” the 31-year-old goalkeeper said. “Every single one of those teams is a tough team. If you look at the stats we’re ranked higher than they are, but at the same time the women’s game especially in the last couple of years it’s really been evolving especially in all of those countries. We are going to continue to prepare for worst case scenarios and whatever they’re going to throw at us. I think we are excited for every single match.”

Under the guidance of Herdman and his coaching staff, Canada has never lost to China, New Zealand or the Netherlands. Canada has compiled a 5-0-0 record and a clean sheet in all of those contests, outscoring their future Group A opponents by a combined 6-0 in those five matches. A surprised Melissa Tancredi hopes she and her teammates can use these statistics as motivation.

“I didn’t even know that stat, that’s an impressive stat,” she said. “I think that’s a stat that we use and that we build upon. That’s huge for our confidence and that’s the goal, really. I don’t think we want any goals against in the first round and it’s for sure our goal to score probably double that. Hopefully that’s what’s going to come out of it.”

The general opinion is that Canada earned a pretty good draw. On paper Group A is not as tough as Group D looks, but not as soft as Group B or C appear.

As the highest ranked team in Group A, Canada (No. 8 in the world) are the clear favorites to finish first ahead of China (14), New Zealand (19) and the Netherlands (15). The hosts should comfortably place first, but most of the players who will help determine the outcome aren’t getting too ahead of themselves. Once the matches arrive, McLeod is going to take an all familiar approach.

“No, I would never say comfortably,” she said of Canada’s chances. “We are never a team that’s arrogant or getting ahead of ourselves. We are most successful when we process and take it one game at a time.”

Defender Rhian Wilkinson echoes those same sentiments because Canada will be pushed and given everything their opponent has to offer. As a host country, teams will no doubt be gunning to knock off Canada.

“Saying we’re going to comfortably win it would be a little arrogant,” Wilkinson said. “I think they are very strong teams and they’ll push us to the very end. We are planning on coming out first in our group, but I don’t think it will be easy.” 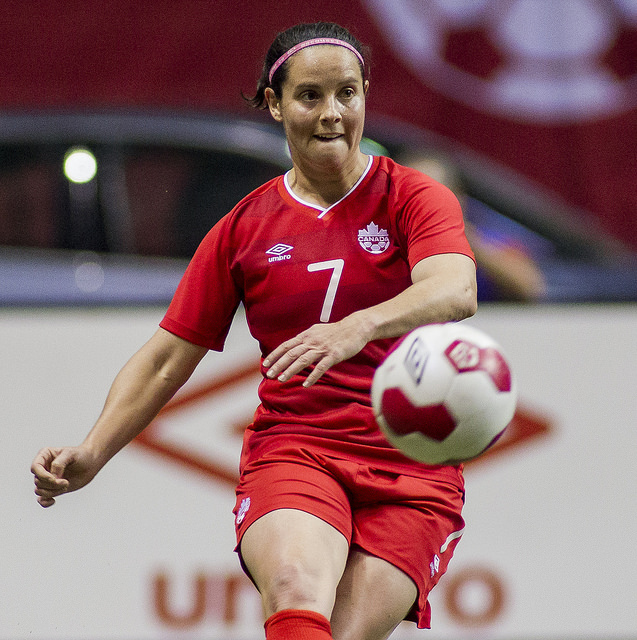 Never one to shy away with her opinion, Tancredi is looking forward to a physical battle with the Kiwis on June 11 in Edmonton, Alberta. Tancredi isn’t as worried about the amount of effort taking a tall toll on Canada. Her confidence is as strong as ever as she discusses the draw.

“I’m really excited about that draw, I think their all strong opponents,” she said. “But I don’t think they’re going to be too taxing for us moving onto the next round, but they are all different. I think the New Zealand game will be very physical which is nice. Overall I’m excited and happy with it.”

The 32-year-old striker has been hobbled with a nagging calf injury which she sustained in November before Canada played a pair of matches in Los Angeles. Despite not being able to train with her teammates, Tancredi is always up for a tough challenge no matter the opponent or degree of difficulty.

Canada can’t have the mentality that winning Group A will be anywhere close to easy or a walk in the park. On any day any women’s soccer team can be beaten. In the Brasilia Tournament last December, Canada underestimated a Chilean side and fell 1-0 in a shocking result. Wilkinson already knows that Canada must be fully prepared at this World Cup.

“We’ve played all three teams on numerous occasions and what I remember is all of them fight until the very end,” she said. “If we go into these games thinking it’s going to be easy coming out number one in our group we’re going to have a horrible awakening I believe.”

China has a strong defensive front, and a compact organizational game plan that teams always struggle to break down. However, China is not the same force in women’s football that they use to be. The Netherlands are a terrific, up-and-coming team that can score when they want. New Zealand will present a tactical challenge for Herdman because he knows his former side so well.

Which one of these teams poses the biggest threat for Canada? Tancredi believes it’s the team she picked to end up in Group A and that’s why she jumped for joy when they were revealed right off the hop.

“To be honest it’s hard to say. China has the block which is very hard to play against,” Tancredi said. “I would say New Zealand in my opinion would give us the hardest challenge. It’s going to be physical, they’re big, they’re fast, they’re a very transitional based team. It’s going to be a tough one.”

The young age and inexperience of Canada’s back four will certainly be tested early on in the tournament. The speed and youth of the Netherlands, with 18-year-old Vivianne Miedema, could be troublesome and catch an older veteran Canadian side off guard. Tancredi admits Canada will have to be cautions defensively when they take on the Orange Wave.

“I think the Netherlands is going to be a tough one for our back six,” the forward says. “They are very speedy upfront, a lot of true goalscorers like you said. It’s just going to be us being diligent with our defensive roles and being able to take responsibility when it comes to defending behind the ball, and attacking in transition. We know that their back-line isn’t the strongest we are going to face.”

UEFA teams are often considered some of the best in the sport. A strong World Cup qualifying group for the Netherlands hasn’t gone unnoticed by Wilkinson, who maintains that all three opponents will be tough no matter what federation they are from.

“Holland’s come out of a very strong European group and we know they have a young player that’s score goals for fun right now,” Wilkinson said. “New Zealand are always a struggle. We know there is a lot of history with John. I really think all three teams are going to be tough.”