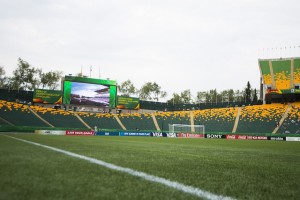 Several rulings were handed down in the players against turf case, but the clock keeps ticking. (Photo: Canada Soccer)

On Monday, HRTO adjudicator Jo-Anne Pickel wrote “that FIFA has received effective legal notice” of players’ complaints regarding turf. FIFA argued that legal action must comply with the Hague Service Convention, a notion that Pickel rejected. Pickel also on Monday rejected players’ appeal to have the case expedited.

A group of international players – who lawyers say exceed 80 in number – took legal action against FIFA and the Canadian Soccer Association on Oct. 1 for their plans to use “inferior” artificial turf at the 2015 Women’s World Cup. Every men’s World Cup has been played on natural grass.

On Friday Valcke went on the defensive at the press conference before Saturday’s Women’s World Cup Draw.

According to Pickel in her ruling — which can be read in full here — Valcke “acknowledged receipt of the materials by facsimile” on Oct. 3, but refused acceptance of the notice and documents on the basis that it was not delivered in compliance with international treaties.

“FIFA’s effort to evade the jurisdiction of the Ontario Human Rights Tribunal has failed,” players’ coalition attorney Hampton Dellinger said in a statement. “[Monday]’s decision makes it clear that FIFA’s legal gamesmanship has proved a loser.”

Dellinger disputed Valcke’s proclamation that he will have an “open dialogue” with players, saying that Valcke would not agree to a conference call last week with players who could not be in Ottawa for the World Cup Draw due to playing commitments.

Valcke said that he would not speak with lawyers and he would not speak to players on the phone. Valcke welcomed the idea of meeting at the FIFA Ballon d’Or Gala on Jan. 12. Citing Valcke’s quote that he is “ready to travel wherever I have to travel” to speak with players on the issues, Dellinger invited Valcke to fly to Brazil and meet with Abby Wambach and Marta, who are both in Brazil for a tournament.

Valcke said on Friday that he recently flew to Paris to speak with two French players.

On Tuesday Pickel granted players their request to amend their application to include alleged reprisal from FIFA and federations toward players.

Players have asked for a case management conference call to deal with preliminary issues. Pickel wrote in her ruling that “this request will be addressed in due course.”