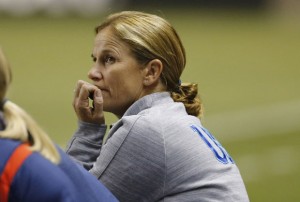 Jill Ellis and the U.S. could face a couple of nightmare scenarios depending on the Women’s World Cup Draw. (Getty Images)

The four pots for Saturday’s Women’s World Cup Draw have been revealed, and there is great potential for one of the six seeded teams — including the United States — to be drawn into something of a Group of Death.

Sweden, ranked No. 5 in the world, were bumped from being a seeded team in favor of Brazil, purportedly since France and Germany are already two of the six seeded teams (ranked No. 4 and No. 2 in the world, respectively). FIFA takes into consideration geography when seeding teams.

So the six seeded teams in Pot 1 are hosts Canada in position 1A (in Group A) along with Brazil, France, Germany, Japan and USA, which will all be drawn into different groups on Saturday. The other three pots are as follows:

Sweden is by far the best unseeded team and will instantly create a two-horse race in whichever group they are drawn. England, ranked No. 7 in the world, will also be a team the seeded squads hope to avoid.

Australia, ranked No. 10 in the world, is the class of Pot 3 and the main team to avoid there.

The most dangerous teams in Pot 2 are Oceania champions New Zealand and Africa champions Nigeria, who have appeared at every World Cup.

So the nightmare possible draws for the United States? In order of difficulty:

All that said, the United States’ greatest worries could come in the quarterfinals (or in the Round of 16 if they manage not to win their group). If the Americans win their group, the first time they could meet another seeded team is in the quarterfinals, and at the very least, France, Germany and Japan are all more than capable of defeating the United States. Canada and Brazil still have something to prove on that front.

The easiest draw for the United States — who can’t draw Mexico or Costa Rica — would be something like this:

Saturday’s Women’s World Cup Draw will take place at noon ET and be aired live in the United States in English on Fox Sports 1 and in Spanish on Telemundo. The Telemundo broadcast will be livestreamed here.