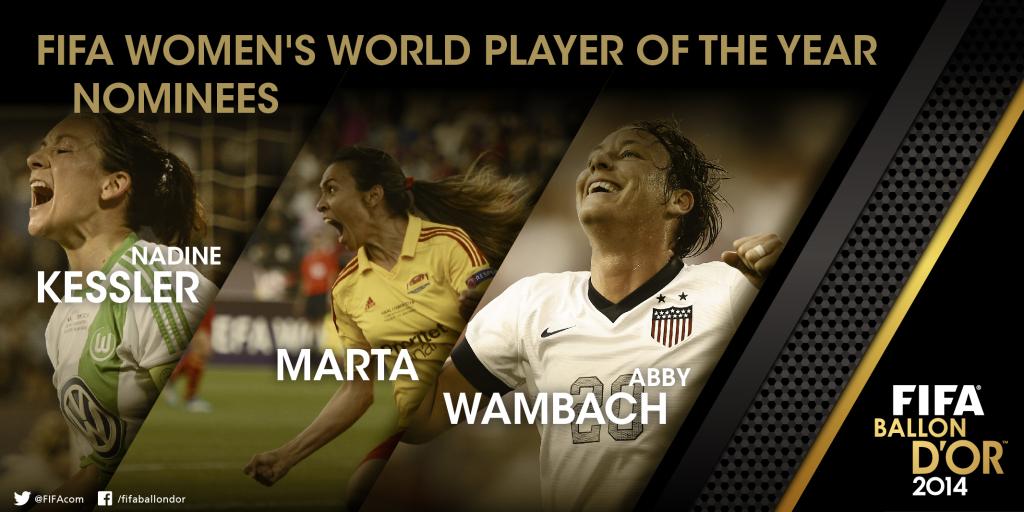 Nadine Keßler, Marta and Abby Wambach are finalists for FIFA Women’s World Player of the Year.

Nadine Keßler, Marta and Abby Wambach are finalists for the 2014 FIFA Women’s Player of the Year.

The winner will be revealed on Jan. 12 at the FIFA Ballon d’Or Gala in Zurich. The finalists were voted on by players, coaches and media members from across the globe after a FIFA committee nominated 10 players for the shortlist. Each of the three voting categories are weighted equally.

Brazilian Marta is a five-time World Player of the Year, winning the award from 2006-2010. Marta, now with FC Rosengård, was brilliant for Tyresö FF in the Champions League final, scoring twice in a losing effort to Wolfsburg.

Wambach won the 2012 award after leading the United States to the gold medal at the 2012 London Olympics. Wambach had 14 goals in 16 games for the U.S. this year, and she scored 10 times in 16 appearances for the Western New York Flash.

Ralf Kellermann, Maren Meinert and Norio Sasaki are finalists for the 2014 FIFA Women’s World Coach of the Year, FIFA announced on Monday.