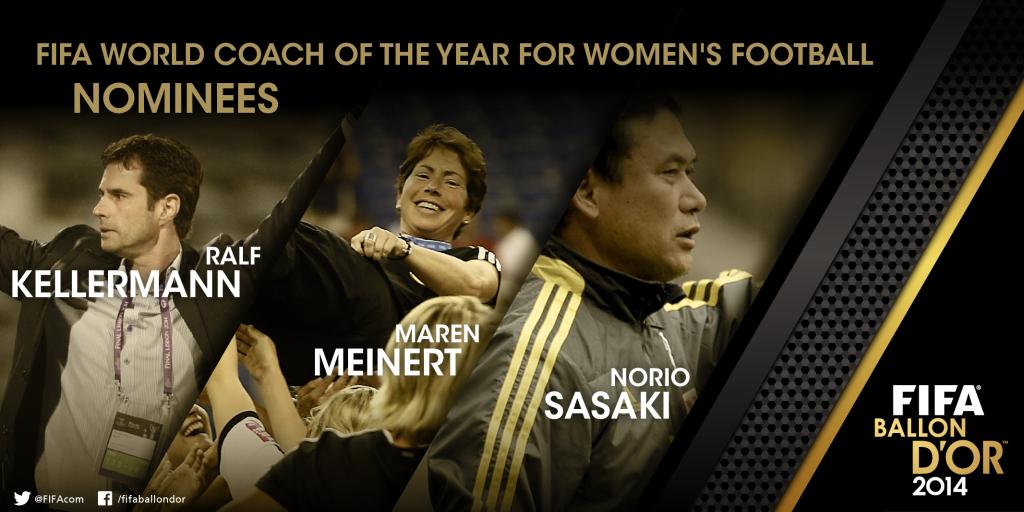 Ralf Kellermann, Maren Meinert and Norio Sasaki are finalists for FIFA World Coach of the Year.

Ralf Kellermann, Maren Meinert and Norio Sasaki are finalists for the 2014 FIFA Women’s World Coach of the Year, FIFA announced on Monday.

The winner will be revealed on Jan. 12 at the FIFA Ballon d’Or Gala in Zurich. The finalists were voted on by players, coaches and media members from across the globe after a FIFA committee nominated 10 players for the shortlist. Each of the three voting categories are weighted equally.

Sasaki finally lifted Japan to the AFC Asian Women’s Cup for the first time in 2014, which also qualified the reigning world champions for the 2015 World Cup. He is a mastermind tactician with lineup changes, as shown in recent friendly victories over Canada.

Also on Monday, finalists for the 2014 FIFA Women’s World Player of the Year were announced. The award will be contested between Nadine Keßler, Marta and Abby Wambach.

Young Irish footballer Stephanie Roche is also a finalist for the Puskás Award, recognizing the best goal of the year. Watch her stunning strike here.