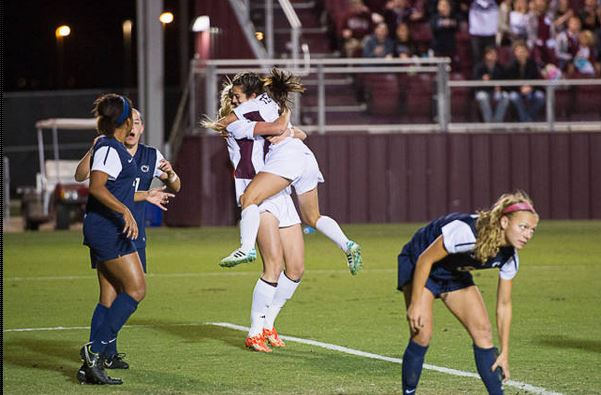 Allie Bailey scored twice in her 100th career match to lift Texas A&M past Penn State, 2-1 on Saturday in College Station, Texas, to lift the Aggies into the College Cup for the first time in school history. Texas A&M will play Virginia in Friday’s first semifinal in Boca Raton, Fla. Stanford and Florida State will meet in the other semifinal.

Bailey opened the scoring five minutes into the match, fighting for the loose ball after Annie Kunz crossed it into the box. The Aggies have made a habit of scoring early in this tournament; that goal is the third in the opening seven minutes of play across four games this tournament.

Penn State tied the game in the 53rd minute, when Salina Williford unleashed a dipping shot from the top of the 18-yard box that went over Texas A&M goalkeeper Jordan Day and into the net. The incredible effort was needed to beat Day, who made seven saves on the night and bailed out the Aggies on several occasions.

Five minutes after Williford’s equalizer, however, Bailey scored the game-winner, pouncing on a loose ball 10 yards from goal and toe-poking it into the net to end the Aggies’ curse of being the best team to never make a College Cup. Texas A&M had previously been to four quarterfinals without winning, but Saturday’s first successful Elite Eight appearance was also the first quarterfinal at home. The Aggies have been stopped short in the Sweet 16 on eight different occasions.

“For me personally, this is getting over a big hump,” said head coach G Guerrieri, who is the only coach in the 22-year history of the program. “We’ve had so many great teams that were good enough to be in the College Cup, good enough to compete and arguably play alongside those teams that were there and that won it, but never did. Always went on the road in this particular round.

“I think you can see the impact of playing in front of [3,161], standing room only, at Ellis Field and what playing in front of the 12th man does for us. I think that was a big part of this particular win. You see the importance that we had of being a No. 1 seed. That was one of the goals the team set back in January, when we started to point towards this season. Winning a national championship is our goal.”

No. 1 seed Texas A&M rolled through the opening rounds of the tournament, beating Houston Baptist 5-0 in the first round, then defeating Arizona 7-2 and No. 2 seed Notre Dame, 2-1 in the Sweet 16.

Williford nearly scored the equalizer around the half-hour mark in what would have been equally spectacular fashion, but her right-footed blast from 20 yards out hit the post.

“You look at this game, you look at the opportunities and that’s exactly what it was,” Penn State coach Erica Walsh said. “It was a matter of inches. Probably the thing we say the most with our team ‘it’s all in the details.’ That’s probably the quote they hear us say the most is that to focus on the details and I thought tonight they did. I was really proud of the effort they put forth, the focus, the concentration and the execution to be honest.”