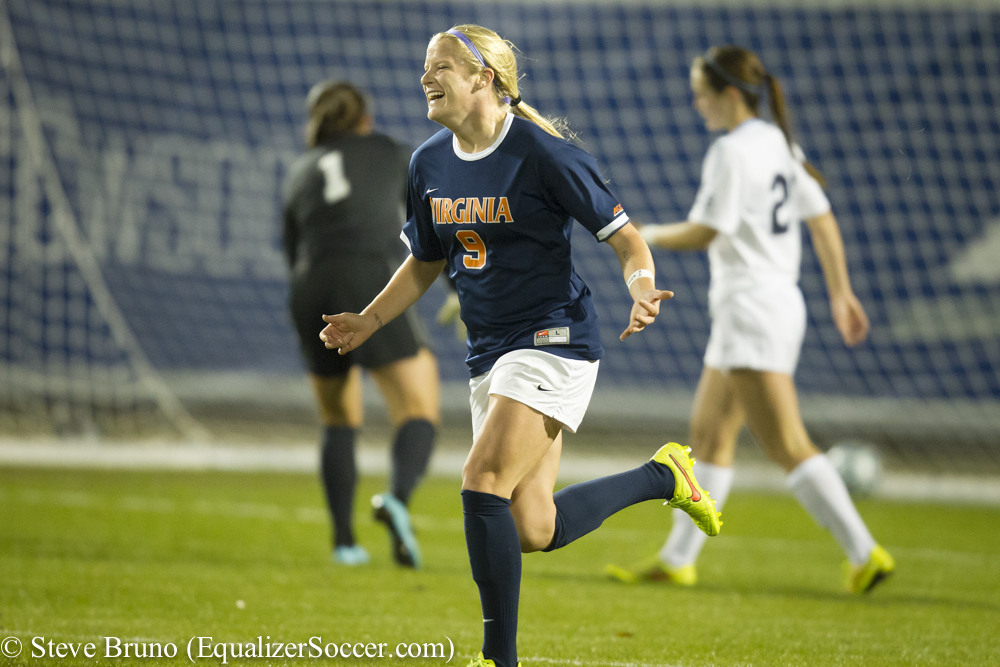 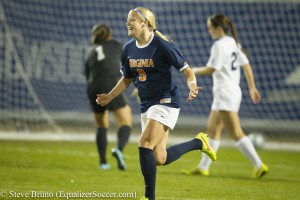 Makenzy Doniak and Virginia are into the third round of the NCAA tournament again. (Photo Copyright Steve Bruno for The Equalizer)

On Friday in Charlottesville, Va., the two teams that punched a ticket to the Sweet 16 of the NCAA Division I women’s soccer tournament did so in different ways. Hosts Virginia advanced by sticking to what’s worked for them so many times before. Kentucky’s advancement to the third round for the first time in program history required making a significant change.

Right before ending the team’s final practice before Friday’s game, Wildcats head coach Jon Lipsitz and his coaching staff decided to make an adjustment to the lineup. He moved Kelly Novak back to a defensive midfield position and pushed Courtney Raetzman higher into an attacking midfield role. The move paid massive dividends as Raetzman lead the way offensively for the Wildcats with a goal and an assist. In the end, Wildcats won the against Arizona State, 3-1.

Postgame Lipsitz explained the considerations that went into changing the lineup.

“We made a decision from the first moment of the game that we going to attack,” he said. “We weren’t going to worry about what was going to happen. We were going to get after them…I talked to Kelly about the need to have a rotation at holding mid or we otherwise we wouldn’t survive the weekend. And we’re not going to play here for one game, we’re here for two.”

In the nightcap on Friday, the Cavaliers met a Rutgers squad known for it’s stingy defense and well organized backline. Although the Cavaliers had several very promising chances in the first half, including when Morgan Reuther got in behind the Scarlet Knights and had only the the keeper to beat with less than a minute left, they were denied a goal.

Despite being shutout in the first half, Virginia continued to methodically control the possession and continued to build up looking for quality chances. After all, it was nothing new for the Cavaliers; Rutgers was playing Virginia they way most did, with numbers behind the ball.

“We felt like we were right there,” Makenzy Doniak said of the first 45 minutes. “All we needed was our first goal and that would open the gates for us a little bit. At halftime we had to settle down and just play our style. Just because it was 0-0 doesn’t mean that you need to go forward 100 percent. Just keep the ball. We did that in the second half.”

The Cavaliers stuck to their patient attacking style and early into the second half, they were richly rewarded. Virginia scored three goals in the span of seven minutes to win the affair 3-0.

After leaving the first half prematurely with a dislocated shoulder, sophomore forward Brittany Ratcliffe returned to the field to lead the way for the Cavaliers. She assisted the team’s second goal and scored the third. Now in her first two seasons with Virginia, Ratcliffe has managed to accumulate a double digit goal total in both.

On Sunday, the Cavaliers will find themselves in very familiar territory, not only playing in the third round of the tournament but hosting it as well. Meanwhile, Kentucky will be somewhere they’ve never been before. The Wildcats have already shown this weekend they can have success with the unfamiliar. Kentucky and Virginia will face off at 5 p.m. ET Sunday.