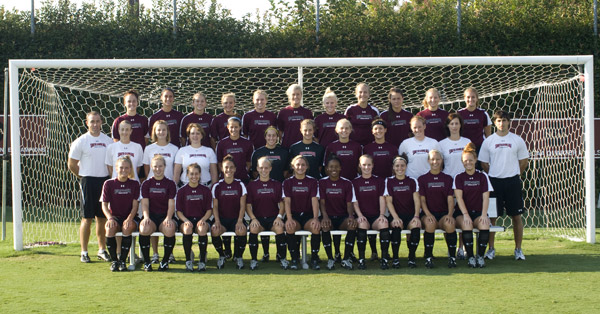 South Carolina is into the Elite Eight of the NCAA Division I women’s soccer tournament after shocking their neighbors to the north — the North Carolina Tar Heels — on Sunday in Chapel Hill. The No. 3 Gamecocks are the lowest seed remaining, with every No. 1 seed and the three other No. 2 seeds advancing.

No. 1 seed Florida State — College Cup finalists last year — will serve as South Carolina’s opponents on Friday. The Seminoles advanced to the Elite Eight with a 1-0 win over UCF behind Kristin Grubka’s goal in the 60th minute.  Watch the highlights here.

“We worked on the play in practice,” Grubka said. “The players (tonight) executed it very well. I saw it go back behind me so I just turned to try and find a rebound and luckily it came to me. I just tried to hit it on frame and it went in.”

On the other side of the top half of the bracket, defending champion UCLA stayed undefeated (21-0-2) and advanced with a 1-0 victory over No. 4 seed Pepperdine.

“Sam Mewis is such a great finisher,” said UCLA head coach Amanda Cromwell. “She’s has such a good presence in there; it’s hard to take the ball off of her. When you have her get the ball inside the 18, there’s a great chance she’s going to score.”

UCLA will play Virginia after the Cavaliers smacked No. 3 seed Kentucky, 7-0. Junior Makenzy Doniak set the school record for points in a game with eight, recording three goals and two assists, while senior Morgan Brian added two goals and two assists in her final game at Klöckner Stadium.

“You don’t go into a game like this, against an opponent as good as Kentucky, and expect a result like this,” Virginia head coach Steve Swanson said.

In the bottom half of the bracket, No. 2 Penn State will take on No. 1 Texas A&M in the Elite Eight on Saturday, while No. 2 seed Florida will play No. 1 Stanford on Friday.

Florida beat No. 3 seed Texas Tech, 3-2 on Saturday to advance. Annie Speese broke the deadlock for Florida in the 81st minute.

Stanford won a second straight decision by a 1-0 score, beating No. 4 seed Washington, 1-0 behind Lo’eau LaBonta’s first-half goal, a rebound finish after her own penalty kick was saved.

No. 1 Texas A&M, meanwhile, beat Notre Dame 2-1. senior Kelley Monogue scored her sixth goal of the tournament for the Aggies.

And Penn State took down Virginia Tech on Sunday to advance, with Raquel Rodriguez opening the scoring and Mallory Weber scoring the game-winner in the 71st minute.