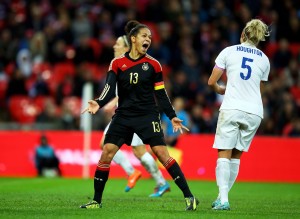 Celia Sasic scored twice for Germany in a 3-0 win over England. (Getty Images)

Germany ruined England’s debut at Wembley Stadium, beating the hosts 3-0 behind a pair of goals by Célia Šašić.

What was nearly a dream start quickly turned into a nightmare for an England side trying to prove it can compete with the world’s best going into the 2015 World Cup.

England midfielder Jordan Nobbs stole the ball from the opening kickoff — taken by Germany — and fired a shot off the crossbar 15 seconds into the match to electrify the Wembley crowd of over 45,000.

But Germany went ahead in the 6th minute, courtesy of an own goal by England defender Alex Scott. Melanie Behringer whipped in a corner kick toward Simone Laudehr, who just missed the ball with her head. But the ball skipped off of Scott’s head and into the net.

By the 12th minute, it was 2-0 as Fara Willims gave the ball away near midfield and Šašić led the counterattack for Germany. England defender Lucy Bronze failed to step to Šašić in time, and the German forward calmly slotted the ball past goalkeeper Karen Bardsley.

Šašić scored her second goal of the match right before halftime, heading in a cross from Tabea Kemme.

“We need to correct our defensive errors but we have to remember we’ve got six months or so before the World Cup starts – it doesn’t start in December, it starts in June and we’ll learn some valuable lessons from today,” England coach Mark Sampson said.

Williams had a chance to pull England closer four minutes earlier, but her half-volley didn’t give goalkeeper Almuth Schult much trouble.

England settled into the match in the second half — partly a result of Germany taking its foot off the gas and making several substitutions — but the home side never looked threatening in the match after that opening opportunity.

A crowd of 55,000 was expected, but around 10,000 fans didn’t turn up amid bad weather and local transport closures. Attendance had been capped at 55,000 due to preexisting transport issues.