West Virginia can’t get over hump in NCAA tourney 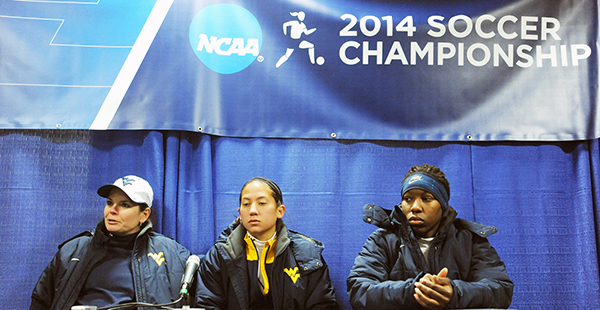 West Virginia’s season once again fell short, this time in the first round of the NCAA tournament. (All-Pro Photography/Dale Sparks Photo)

For the second time in as many meetings, the two former conference foes were deadlocked after regulation. As in the September meeting between the two sides, the score remained the same after the two overtime periods once again. Of course, unlike the previous meeting, this affair had to have a winner.

Déjà vu once again. The first-round NCAA game held in Morgantown last November had to be decided in the same manner. In that match, the Mountaineers faced off against another old conference rival, Rutgers. West Virginia would win that shootout, 3-0 but Saturday’s affair would see Georgetown advance.

Each of the first-round NCAA tournament games did share another similarity. In Saturday’s game, Mountaineers senior forward Kate Schwindel didn’t play in regulation or overtime due to an injury she sustained in the Big Twelve Tournament the week before. Nonetheless, she was selected as a penalty kick taker for West Virginia.

The year before it was Rutgers’ senior Jonelle Filigno who stepped up to the line in penalties after an injury had kept her from playing. Both senior forwards failed to convert and ultimately their respective sides would lose the shootouts.

“Prior to the game she went out and hit a couple and she never misses. She wanted to take it and I take full responsibility that I felt and I made the decision to let Kate Schwindel take that penalty kick tonight,” West Virginia coach Nikki Izzo-Brown said after the game.

Izzo-Brown admitted that what happened with Filigno and Rutgers the year before crossed her mind and in retrospect she possibly shouldn’t have put Schwindel in that position.

The Mountaineers have made the NCAA tournament every year for 15 straight years. Once again, a feeling of déjà vu creeps in. Despite the impressive streak, West Virginia has seen its tournament runs cut short more often than not. Their best finish was an Elite Eight appearance in 2007 and since then they’ve only once made it past the second round.

Looking ahead to next fall, West Virginia will return much of their starting lineup from this season. Kadeisha Buchanan, who will be a junior then and likely coming off a World Cup, showed her quality on Saturday. Buchanan lead the Mountaineers backline and helped keep Georgetown at bay throughout much of the match. When she was able to push forward, her speed and athleticism was striking. Hoyas head coach Dave Nolan quipped, “I don’t think Seabiscuit could run with her (Buchanan) when she gets going full stride…”

Nolan called the penalties a “double secret bluff” as both sides gone to penalty kicks the week before in the their respective conference semifinals, adding, “at the end of the day it just comes down to nerves, comes down to who can strike the ball cleanly, and who can deal with the situation. It’s a horrible way to lose a game and it’s a fantastic way to win a game and we feel fortunate we were on the good end of it tonight.”

It’s fitting that the Corboz sisters bookended the Hoyas shooters. Their positions in the shootout mirrored where they are in their Georgetown careers and were reversed from the conference semifinal against St. John’s. Younger sister Rachel, who is just beginning her career at Georgetown, took the first kick while senior Daphne stepped to the line with a chance to win it.

Daphne, who broke Ingrid Wells’ record for career points at Georgetown earlier this year, stepped to the line with a chance to extend the Hoyas’ season as well as her collegiate career. She calmly converted the penalty to send Georgetown through to the next round.