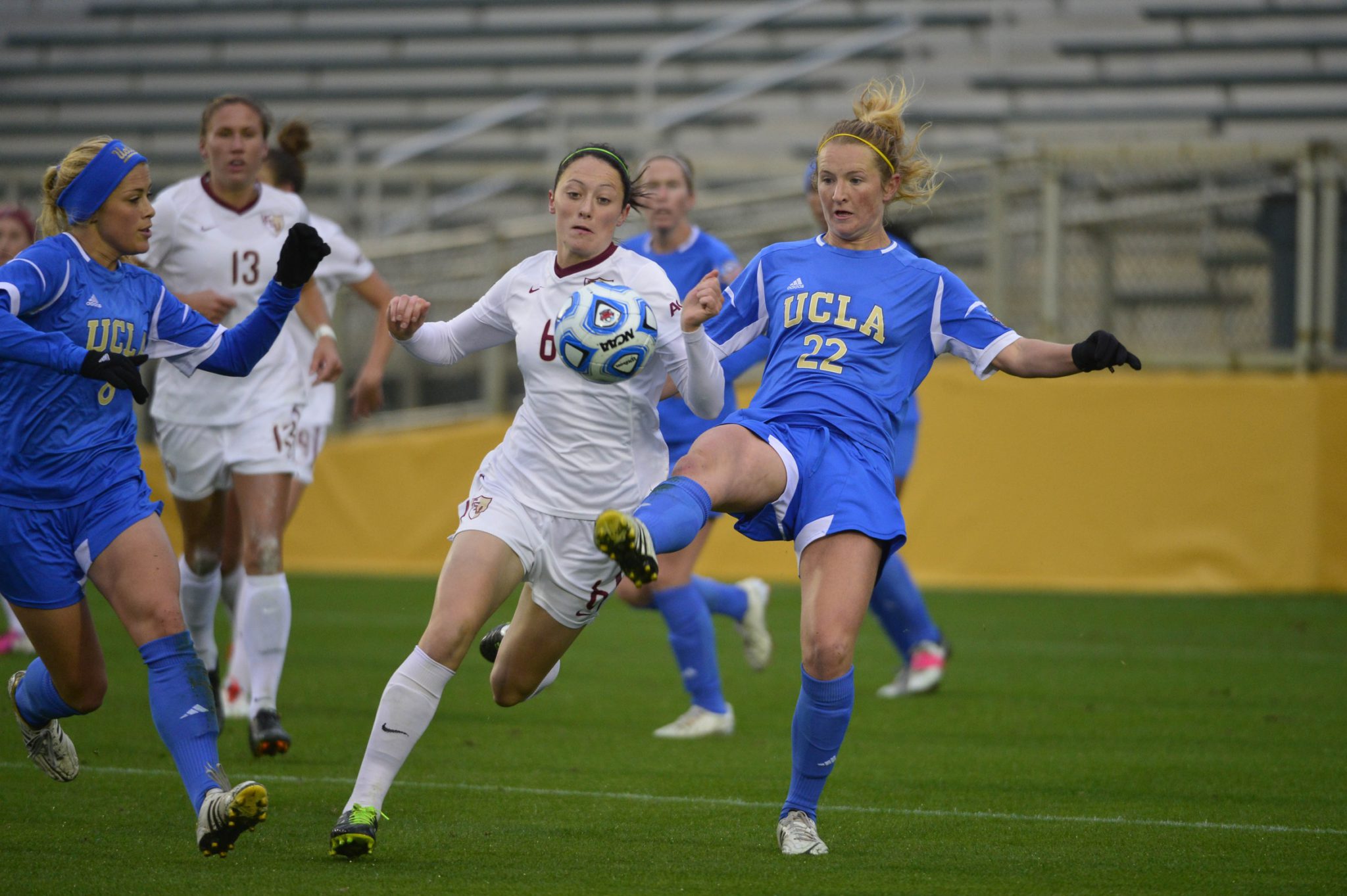 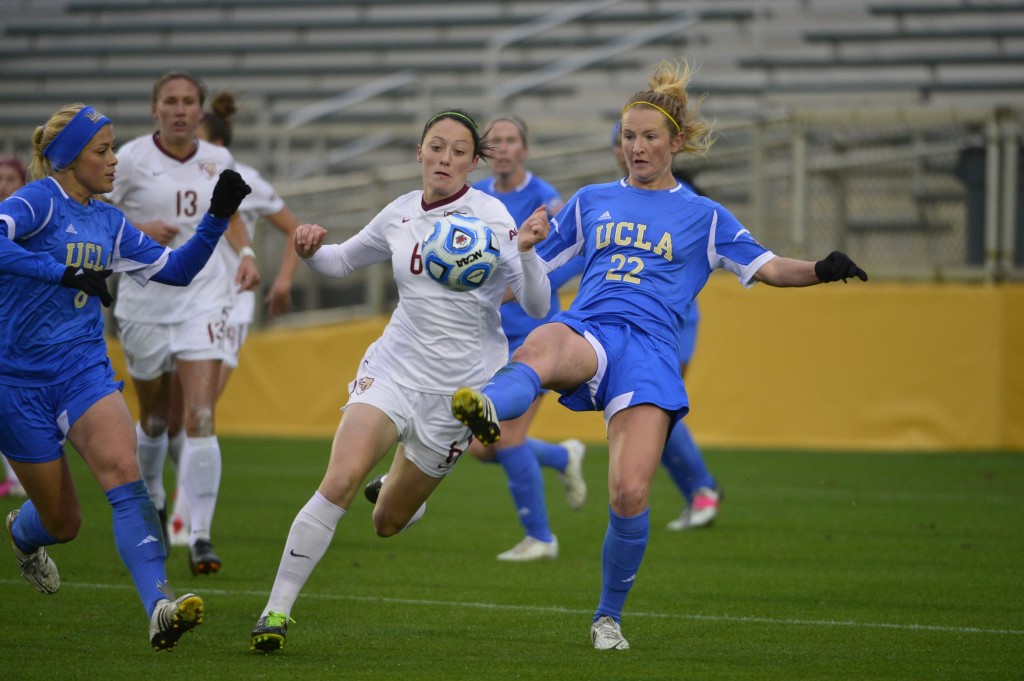 On Monday the path to Boca Raton began to take shape as the NCAA released the 2014 tournament bracket. Over the next couple of weeks, the crop of 64 teams will be whittled down to the four participants of the College Cup. Between now and then, there’s plenty of soccer to behold and plenty of questions to ponder. Two of the more prominent ones being 1) Who has the best shot at winning the title? and 2) Which players should fans keep an eye out for?

History has shown that there’s no reason to look beyond the 16 seeded teams when predicting who will take the trophy. In the past five years, an average of 2.8 number 1 seeds have made the College Cup and a seeded team has taken the championship each of those years. The lowest seed to do so was Notre Dame, who was a four seed in 2010.

It’s hard to pick against them to repeat as champions. After all, it’s likely that Bruins will make up a full third of the first round in next January’s NWSL draft. With that amount of experienced, highly talented players on one team, they are certainly the favorites to win it all. They have the best back four in the college game and a phenomenal midfield duo in Sarah Killion and Sam Mewis, who could be drafted as high as No. 2 overall in January. It’s often said, however, that there’s few feats as difficult as defending a title and the committee did UCLA no favors here. Potential opponents for the Bruins on the road to Boca Raton include Pepperdine and the ever-dangerous striker Lynn Williams; plus Virginia, who the Bruins needed penalty kicks to beat in last year’s semifinals.

The Seminoles are tied with Connecticut for most appearances in the College Cup without winning a championship. After three straight years of making it to the final weekend, is this the year that Florida State gets the proverbial monkey off its back? Florida State is of course known for its lockdown defense anchored by Kristen Grubka, but Florida State has gotten consistent offensive production from its Icelandic duo Dagny Brynjarsdottir and Berglind Thorvaldsdottir. At least one of the two has scored a goal in all but one of the Seminoles matches so far this season. Florida State’s path the championship does potentially include the only team to beat them this year: Florida. If the two meet up again, the Seminoles should be in better position to win as their outside backs, Megan Campbell and Emma Koivisto, were away on international duty during the first matchup.

Texas A&M has made 20 NCAA tournament appearances without cracking the Final Four. This year, Texas A&M claimed its first No. 1 seed in school history and looks primed for a run into December. The Aggies are strong throughout the pitch but their real strength is its offense. Led by star midfielders Kelley Monogue and Shea Groom, who both have reached double digits in scoring, the Aggies have six players with at least five goals on the season. As seven of the team’s starters are seniors, Texas A&M may never get a better opportunity to win a national championship. One of the toughest potential challenges Texas A&M will face on the road to the Final Four is perennial powerhouse Penn State. Despite having a young team, the Nittany Lions posted an impressive 17-3 record.

Like the other No. 1 seeds, it’s Stanford’s defense that stands out. Having allowed only eight goals on the season, scoring on Stanford will be a tough task for any of its opponents. On the other side of the ball, the Cardinal seems to be peaking at the right time offensively. In the first 14 games of the season, the team scored two goals a game but in the last six, Stanford averaged 3.16 goals a game. Lo’eau LaBonta, Chioma Ubogagu and Taylor Uhl complement each other well and should be able to supply enough offense to propel Stanford past their early-round opponents. Looking at the bracket, Stanford has the easiest road to the Final Four. Of their potential challengers, Florida or California would present the biggest obstacle for the Cardinal.

With a starting lineup that includes three 10-plus goal scorers from a year ago, Makenzy Doniak, Brittany Ratcliffe and Morgan Brian and another that set a new school record for assists in a season in Danielle Colaprico, Virginia can be expected to make a deep run in the tournament. What didn’t return this year is much of the team’s defense from a year ago, and it shows. The team’s light non-conference schedule didn’t help the new backline acclimate and may end up costly as the Cavaliers attempt to make it back to the College Cup. Virginia will have to get past the team that knocked them out of it a year ago, UCLA, to reach the final weekend.

Players you should get to know

After a solid rookie year where she notched six goals and seven assists, the physical and fast forward has exploded to record 18 goals and six assist this season. Hatch’s 42 points are more than twice what any other Cougar has managed this year. If BYU is going to be successful in the postseason, Hatch will have to come up big. BYU faces a tough first-round challenge in Colorado, a team that finished third in the PAC-12, far and away the strongest conference this season. If Hatch and the Cougars get past the opening round, she’ll face likely off against North Carolina and Satara Murray, one of the nation’s premier center backs.

Last season, head coach Jon Lipsitz moved Gilliland from outside back to forward to jump-start a lagging offense. In the middle of this season, Lipsitz did the opposite to make his team successful. Since Gilliland returned to the backline, the Wildcats have only lost one game. To put it simply, it’s hard to identify a player in the college game that’s as equally versatile and influential. Kentucky has been placed in arguably the toughest quadrant in the tournament as the Wildcats would most likely have to face both UCLA and Virginia to make a deep run. If Kentucky is successful, Gilliland will be called upon to shut down some of the game’s best attacking talent. A good showing in the tournament could only help the U.S. 23 player ahead of the 2015 NWSL draft.

When Tejada is described as the best player the Redbirds will ever see, it’s not hyperbole. She’s been the team’s focal point since she arrived on campus four years ago, racking up impressive list of accolades. There’s really not much the Redbirds forward hasn’t accomplished in her career. She’s earned the Missouri Valley Player of the Year each season and has lead her team to as many conference titles. Her career 72 goals lead all active players in the NCAA and her 42 assists are good for second-best among active players. Illinois State isn’t expected to survive in the tournament very long but perhaps Tejada can accomplish one of the few feats that eluded her so far, scoring a goal from the run of play in the NCAA tournament. Given the dearth of forwards in next year’s draft, NWSL fans and scouts alike may want tune in to this contest.

Her throw-ins function as amazing set piece weapon, especially when you have the likes of Dagny Brynjarsdottir and Kristen Grubka to connect with, but there’s much more to the left back. She’s also quite capable of earning assists with her feet as well. Moreover, she’s an effective 1-v-1 defender who is good at shutting down opponents. Florida State looks poised to make a deep run once again in the tournament, so fans should get a good chance to see Campbell in action.

Corboz is one of the most exciting college players to watch. Her technical skills and phenomenal vision have been dazzling fans for the past four years. She’s great in tight spaces and is equally capable of scoring as assisting. She’s netted nearly an assist per game this season along with 10 goals. After failing short of winning the Big East title, the Hoyas’ senior class will want to finish their careers off strong with a good tournament showing. Georgetown faces off against West Virginia in the first round. No doubt Kadeisha Buchanan & Co. will make it difficult for Corboz to operate, but if the Hoyas are to survive,  Corboz have to find success.

Mewis, Van Hollebeke in Japan with eyes on Canada
No. 1 seeds each score five to open tournament