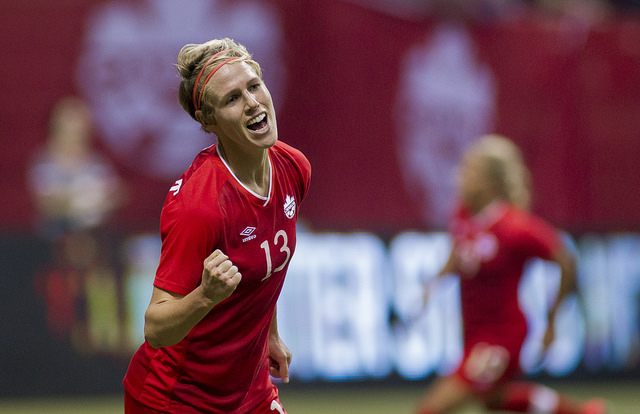 Sophie Schmidt and Canada are confident that they can make a run on home soil next year, but there’s a long way to go. (Photo: Canada Soccer)

VANCOUVER, Canada — Canada’s friendlies against the United States, Germany, and Japan this year have proven to be a great learning experience and measuring stick for the host country as they look for improvement before hosting the 2015 World Cup. Canada has a record of 3-5-1 this year and has not earned a victory since March 12 at the Cyprus Cup.

Coach John Herdman and his players don’t seem nervous about Canada’s record against the top teams in women’s football, but outsiders who follow this team closely are starting to wonder if Canada can truly win against top ranked teams next spring. In those matches against the reigning Olympic, European and Olympic Champions, Canada went 0-4-1 with four goals for and 10 against. The best result was a 1-1 draw against the United States on May 8 in Winnipeg.

During the 2012 London Olympics, Christine Sinclair and Melissa Tancredi led the attack for Canada and the team went on a surprising run that earned them a bronze medal. Fast-forward to present time and Canada’s core group of players are two years older and have accrued a lot of football mileage.

Before Canada’s first group match next year, several veteran players will be in their 30s, including Rhian Wilkinson (33), Melissa Tancredi (33), Erin McLeod (32), and Carmelina Moscato (31). Christine Sinclair will turn 32 the day after Canada’s second group stage match in Edmonton, Alberta. These players are all vital to the success of Canada. Any sort of injury or minor niggle could throw the team tactics, formation, and chemistry into a flux.

This has already taken place as Diana Matheson will be in a tough battle to return to action before the World Cup after tearing her ACL on Oct. 25 against Japan. Matheson, 30, is a terrific ball distributor and a key player that frequently finds chemistry with Sinclair. Her speed and passing skills will be hard to replace if she isn’t physically and mentally match fit before the World Cup.

The World Cup final will be played on July 5 at BC Place in Vancouver. Canada is training and holding residency in nearby Burnaby, British Columbia, and hoping they will be able to do enough to play in that match. The best route for Canada’s path to World Cup final is with a new added youth movement that Herdman has been extensively focusing on.

Ashley Lawrence, Kadeisha Buchanan, Sura Yekka, and Jessie Fleming all saw significant minutes against Japan last month. Sixteen-year-old Fleming was by far one of the biggest and brightest players for Canada last month. If Fleming can show the kind of poise, confidence, talent and skills that she displayed against Japan, she could be a real threat and contributor for Canada next year.

Canada has tried out several players at left-back and Sura Yekka has a strong chance to be one of Canada’s full-back players at the World Cup. With Buchanan also in the back four, it isn’t a stretch to think Canada could start two teenagers in their opening match at Commonwealth Stadium. The next seven months and the 2015 Cyprus Cup will be great indications to see if Yekka, Buchanan, Lawrence and Fleming can regularly compete and keep up with top teams.

The welcome return of central defender, Lauren Sesselmann would be a great roster addition for Canada. The Wisconsin native tor her ACL at the 2014 Cyprus Cup. Sesselmann, 31, has been lightly training in the gym and Canada is hoping she will be able to return to the pitch at the 2015 Cyprus Cup. The back-four of Canada would receive an enormous boost if Sesselmann is healthy and back in match condition before June 6.

Canada’s biggest position of depth is in goal with three outstanding keepers. Erin McLeod will be the go-to keeper at the World Cup and with her next appearance McLeod will earn her 100th international cap. Stephanie Labbe has had a fantastic season in the Swedish Damallsvenskan and Karina LeBlanc played well for the Chicago Red Stars. Sophie Schmidt and her teammates are quite confident with whoever is asked to play in net for Canada.

“(It’s) unbelievable,” Schmidt said. “Teams, they dream to have one really good keeper and we’ve got three of them. It’s kind of struggle to know which one’s going to play, but we just have a cool calm knowing that we have them behind us to make big saves.”

Ideally Herdman would like Canada to play 12 international friendlies before the World Cup kicks off. His team will look to improve results when they play a pair of matches against Pia Sunhage’s and No. 5 ranked Swedish team this month. Canada’s closed-door matches against Sweden will be played on November 24 and 26 in Los Angeles, Calif.

Sweden has already named a roster for those matches.

“I think getting a shutout, if we can get a shutout, then teams can’t beat us,” she said. “That’s the most important, and then also just becoming clinical in front of the net. That’s two big things.”

The positive steps for Canada are certainly improving and growing with each passing day. They are a very good team, but not yet on the level of a United States, Germany or Japan. The next seven months will be important as Canada must make more significant strides on the pitch. If they’re able to earn victories, and beat teams ranked above them, that will go a long way in helping with confidence.