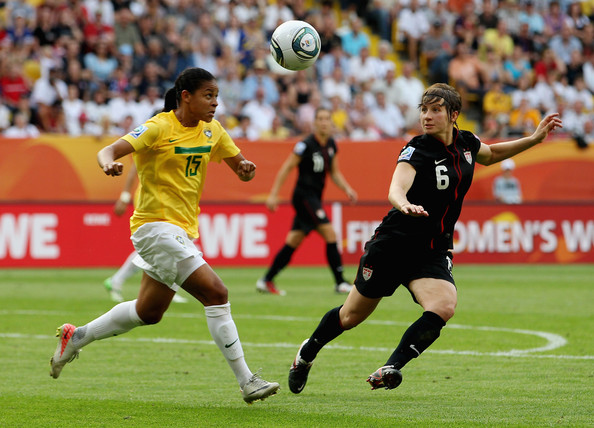 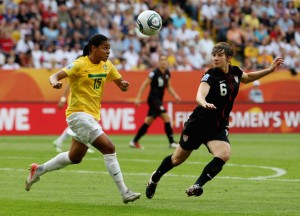 Francielle (left) in action at the 2011 World Cup against the United States. (Zimbio)

The Boston Breakers bolstered their midfield on Monday with the signing of Brazilian playmaker Francielle.

Francielle, 25, previously played for Sao Jose in Brazil’s top flight, winning league and cup titles in 2014 and the Copa Libertadores in 2013. She played for Brazil at the 2011 World Cup as well as the 2008 and 2012 Olympics. Brazil won the silver medal in 2008, losing to the United States in the final in extra time. She made her senior team debut for Brazil on Nov. 13, 2006 — a month after her 17th birthday — in a 2-0 win over Peru in World Cup qualifying.

“Francielle is a fantastic addition to the roster,” Boston Breakers general manager Lee Billiard said. “She’s a very talented and known player who has gained a tremendous amount of experience for such a young player. Her ability on the field is tremendous, and she will add a lot of creativity and attacking threat to this new-look roster. I am very excited to see her play in the NWSL in a Boston Breakers jersey.”

The Brazilian, whose full name is Francielle Manoel Alberto, might be best known in the U.S. for her time with Sky Blue FC in WPS in 2009. She scored the game-winning goal on the road against the Washington Freedom in the first round of the playoffs. Sky Blue FC continued on to beat Saint Louis Athletica and the Los Angeles Sol on the road to win the inaugural WPS championship. This was the goal she scored (3:55 mark):