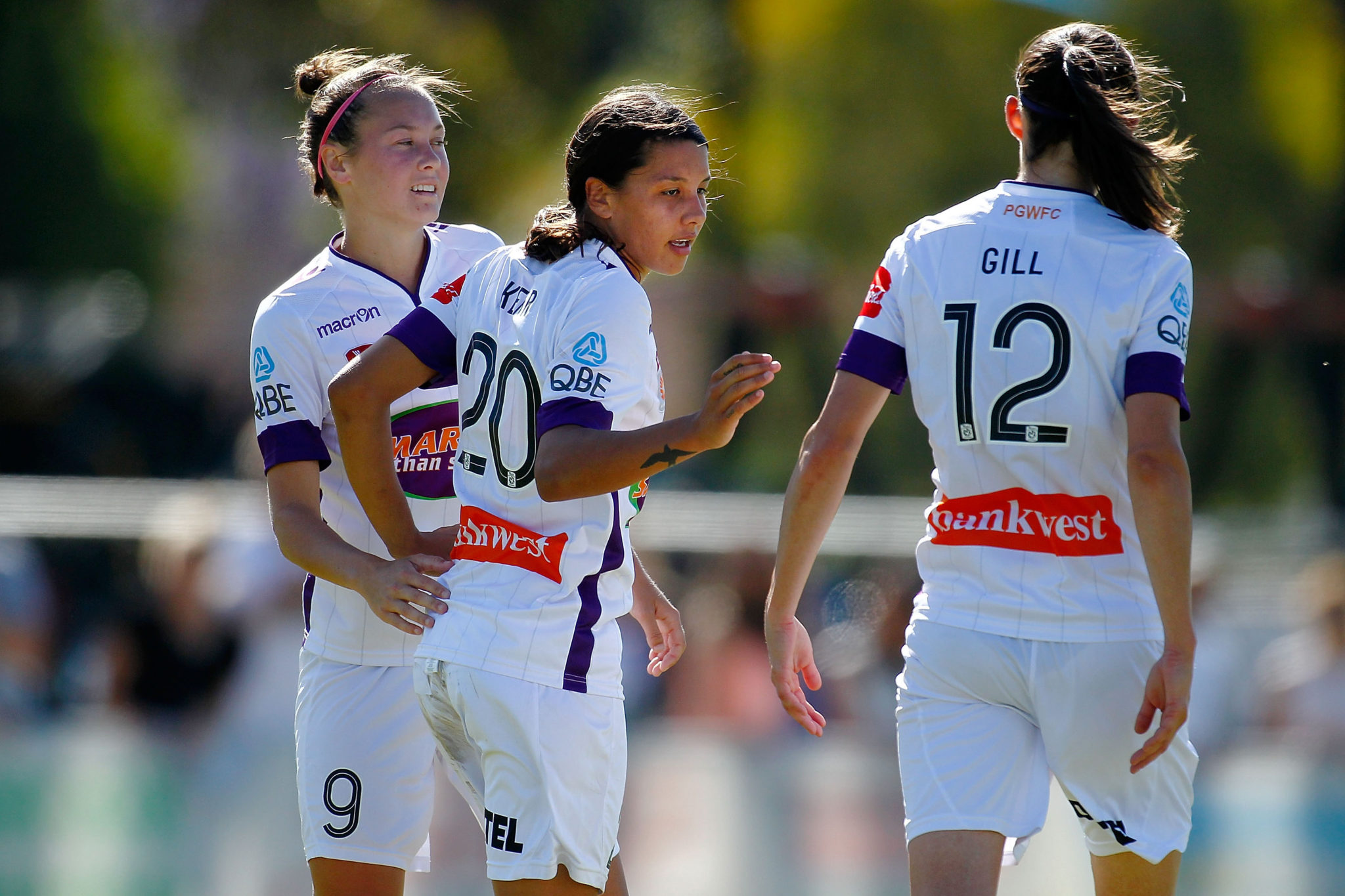 Perth Glory defeated Newcastle Jets, 4-2 on Saturday for their eighth win in nine outings for 24 points. Perth is assured of a home semifinal match as they cannot finish lower than second; with an eight-point advantage over second-place Canberra with three rounds left, they should easily capture their first ever W-League regular season championship.

Caitlin Foord won W-League Player of the Week for Week 8, after the Glory defeated Melbourne Victory, 3-1. She told W-League.com that she has enjoyed her first season with the Western Australian club, after previously playing with Sydney FC. Still only 19 (she celebrates her 20th birthday this week), Foord is focused on capturing a second W-League title in three years after triumphing in 2012-13 with Sydney. She also has one eye on next summer’s Women’s World Cup: “That is my biggest goal ever since I went to the last World Cup in Germany. It has been a long four years but it is definitely a goal of mine to get in the team. I want to experience what I experienced in Germany again because it was so amazing.”

Previously last-placed Brisbane Roar won only its second game of the season on Saturday, handily defeating visiting Adelaide 3-0, which snapped the Reds’ three-game winning streak. Tameka Butt scored twice while Emily Gielnik added one. Both Butt and Gielnik are Australian national teamers; Butt entered the season with 33 goals in 62 appearances and has added five more this season for 38 goals in her W-League career, while Gielnik started the season with 20 goals in 38 appearances and has added four goals this season. Adelaide is a point ahead of the Roar in sixth (9 points) but the Roar is no longer at the foot of the table, as Western Sydney now props up the table with 7 points.

On Sunday, Melbourne won their first game in four matches by defeating Western Sydney Wanderers 3-0, with goals from Australian internationals Stephanie Catley (Portland Thorns), Lisa DeVanna and long-time Victory forward Rachel Quigley. With the win, the Victory is back in the playoff spots, tied for third with Sydney FC on 14 points, two ahead of the Jets, who are now on the outside looking in. Americans Christine Nairn and Elli Reed played 90 minutes for the Victory, while Lauren Barnes was unavailable this week. Kendall Johnson and Keelin Winters did the same for the Wanderers.

Melbourne also boosted its chances of making the W-League playoffs and performing well in the 2014 Nestle International Women’s Club Championship in Japan at the end of the month by signing Caitlin Friend, who played for Notts County Ladies in the FAWSL this season, helping the club to a fifth place finish. She told W-League.com: “I’ve just had eight months of full-time football and I’ve never been as fit as I am now. The training was insane [at Notts County].” Friend played all 90 minutes in the win over the Wanderers.

Also on Sunday, Canberra United defeated Sydney FC, also by a 3-0 score line, replacing the Harbor City club in second place with 16 points (5-1-3 W-D-T), with Sydney dropping to third, 2 points behind, and tied with Melbourne. The top two teams in the regular season host the semifinal game so this was an important win in Canberra’s quest for second. American Stephanie Ochs scored the third goal in the 76th minute, while all-time W-League leading scorer Michelle Heyman (40th) and defender Sally Rojahn (22nd) also scored. Americans Chantel Jones, Kendall Fletcher, Lori Lindsey and Ochs all played 90 minutes for Canberra, as did Jasmyne Spencer and Samantha Johnson for Sydney. Ochs’ goal was her second on the season for Canberra.