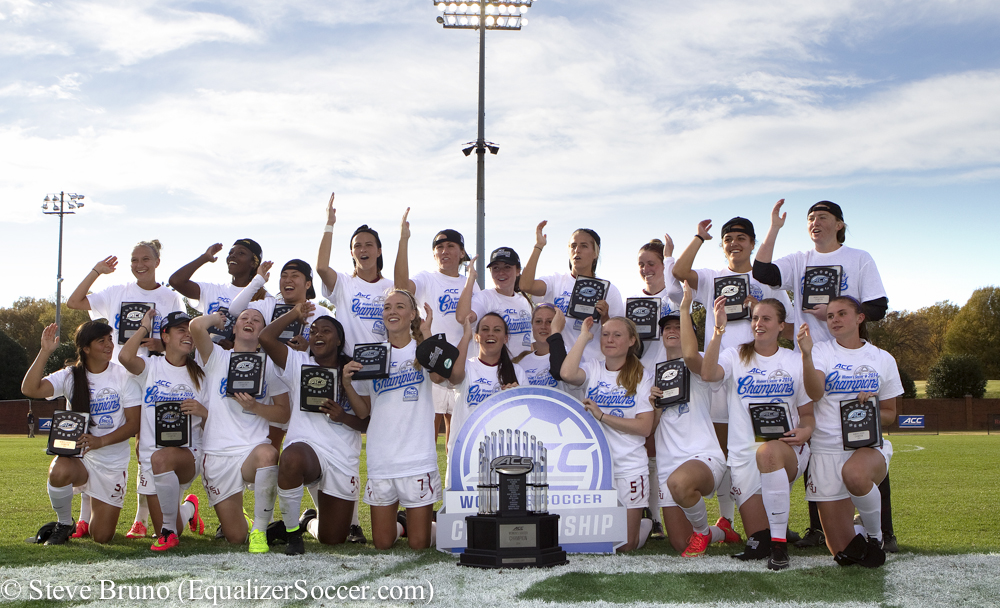 GREENSBORO, N.C. – A 17th-minute header from Florida State’s Carson Pickett was the only dent either team could put in the scoreboard during Sunday’s ACC Tournament final between the No. 2 Seminoles (18-1-1) and No. 4 Virginia Cavaliers (18-2-0), but it was enough to crown FSU ACC Champions for the second consecutive year. The 1-0 victory is also Florida State’s third conference championship in four years and should sew up a top seed for the program in Monday’s NCAA tournament selection.

FSU’s obstinate defense continued to be the kryptonite to UVa’s super-powered offense, shutting them out for the second time this season to account for both of the Cavaliers’ losses this season. In fact, since the two teams’ 2011 regular-season meeting in Charlottesville when Virginia outscored the Seminoles 4-3 in overtime, FSU has been the only team to hold the Cavs scoreless in the 81 games since, doing it four times over the three-year stretch. In their first meeting this season, the Seminoles blanked Virginia despite being outshot 13-8. In Greensboro, though, the backline for FSU clamped down even harder on UVa, allowing only eight shots for a usually-prodigious Cav attack that averages nearly 22 per game.

While the defense held up their end of the bargain, the Seminole offense raised their level as well, taking 12 cracks at the Cavalier goal with eight on target. ACC Offensive Player of the Year Dagny Brynjarsdottir put on a show, taking as many shots in the first half as the combined efforts of the UVa offense, including a clever backheel in front of goal that went just wide and an overhead shot with her back to goal that was saved by Cavs ‘keeper Morgan Stearns in the last seconds of the half.

“You can feel her influence,” Virginia head coach Steve Swanson said about the challenges of dealing with the Icelandic international. “On runs in the box, on set plays, things like that. She’s tall, she’s a presence in the air, she gets her head on things, and she’s a very opportunistic finisher. If she doesn’t get a lot of chances, she doesn’t need a lot of chances. She can score. We needed to be aware of where she was all the time and I thought we did a pretty good job of that.”

Although Brynjarsdottir was unable to finish her chances in the final, it was, ironically, the player who often feeds her a steady supply of crosses who would be the difference.

For Pickett, the script usually dictates that she barrel down the left flank, whip a fierce cross into the box, then run in from the wings to celebrate a goal with her teammates. It’s what she did in Friday’s semifinal defeat of No. 9 Notre Dame and, as the Seminoles’ assists leader with 11, it’s something she’s done numerous times this season. In Sunday’s match, though, Pickett worked her way to center-stage as forward Cheyna Williams drove down the right side of the field, trying to create an opportunity.

“I saw Cheyna Williams on the far side carving people up and I thought she was going to get taken at first,” Pickett said of the play from her perspective, “but she made a great touch to the endline and crossed it. I saw a girl jump in front of me and I was about to jump until I saw she jumped so when it came down it was a pretty easy finish. I was just trying to get anything on it that I could.” 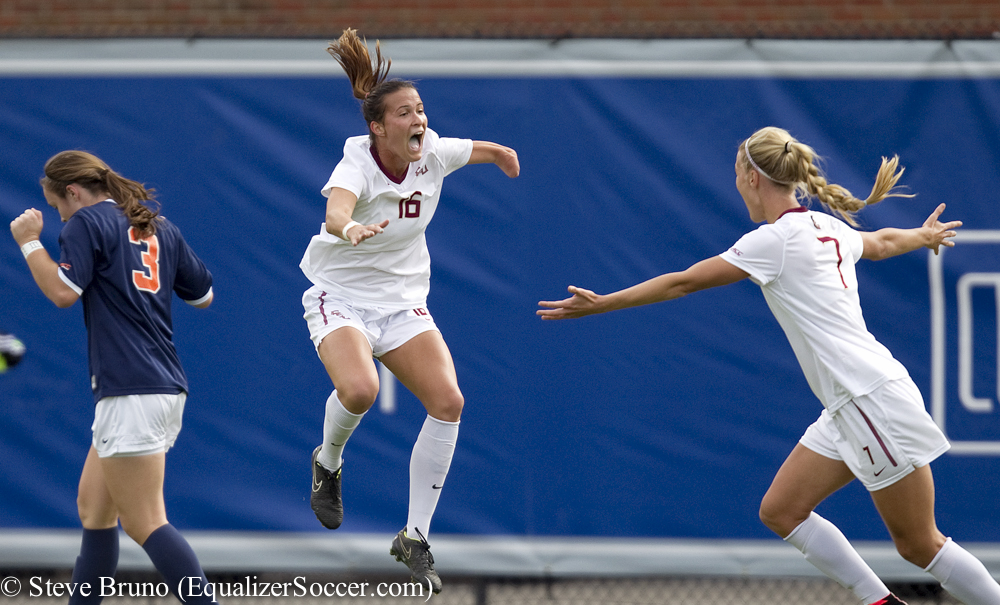 With the spotlight shining on her, Pickett stayed rooted to her spot on the far side of the goal mouth as Williams’ ball came in and Cavalier defender Megan Reid stretched in vain to knock it away. The Seminole junior headed the ball down into the ground and just inside the post for the game’s only score. Pickett pumped her fist up in the air and nearly jumped out of her boots in celebration of her first goal of the season, and only the fifth of her collegiate career, as her teammates ran in to join her.

“Yeah, Carson, she’s a winner,” Krikorian said in praise of the goal-scorer. “She’s a kid that overcomes whatever it is that’s thrown at her and I’m happy for her. She’s a lovely kid and she’s positive, hard-working and every day she shows up and does the best that she can. Those are the kids you root for, those are the ones that you want to have a big moment like she did today.”

Appreciating the ironic twist of finally being on the receiving end of someone else’s cross, Pickett said, “It’s great, it’s like they’re returning the favor a little. They always give me favors when they finish balls that I give so when she finally gets free, I need to return the favor and give her the credit.”

There was plenty of irony to go around on the play, too, as Vanderbilt-transfer Williams got her cross off at the expense of her former Commodore teammate-turned-Cavalier defender Tina Iordanou. It was Williams’ second assist of the tournament weekend as the ‘Dores’ leading scorer in 2013 continues to make a big splash in her first year with Florida State.

“Cheyna brings a special athletic quality to the team,” coach Krikorian said of his dynamic forward. “One of the things we thought last year is we weren’t as good at stretching opponents and playing behind them and certainly with Cheyna’s pace that’s changed now. So now we can play some nice possession soccer and keep the ball some, but we’re also a threat to get behind you so you kind of have to respect that a little more.”

Swanson said his team was still optimistic despite being down a goal coming out of the first half, having had a few decent chances of its own. As they moved into the next half, the coach tweaked his team toward a more attacking formation:

“We changed our system in the second half, tried to do a few different things that would generate some offense and get some chances, but just not enough,” he said. “When they get that first goal, they’re tough to beat and I think that’s the difference in the game today, they finished their chance and we didn’t.”

Krikorian’s team had the shift scouted, though, and the defense was a step ahead:

“We had talked before that at some point during the game they might change and play 3-5-2, which is what they did during the second half and I think our kids were prepared for it, but it does change the dynamic of the game. In the second half, Virginia ended up playing more long balls than they typically do and we had to adjust to it.”

The urgency and desperation climbed in the second half with the two usually silky-smooth, possessing teams accused of an unusually high incidence of fouls by referee Peter Dhima, 16 within the second 45 minutes. As the tally piled up, Dhima began dealing cards to both sides and the Cavaliers took two yellows while FSU got one of their own.

“I think when you have two top-level teams, as we do, the intensity ratchets up,” said Krikorian of the physical combat in the second half. “The competitive spirit ratchets up and you have two teams that are battling and want to win. Virginia’s a very competitive team and our kids are competitive as well and that’s kind of the by-product of it.” 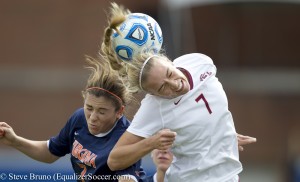 FSU’s Dagny Brynjarsdottir is always a handful for defenses. (Photo Copyright Steve Bruno for The Equalizer)

While FSU’s defense has earned a reputation for hard-nosed, yet intelligent defending, much of the reason for Virginia’s woes came from the layer just ahead of the back four. The often unsung defensive midfield partnership of Isabella Schmid and Michaela Hahn performed no less heroically on Sunday, stymying and stuffing UVa’s lethal midfield attack all day. Fittingly, as the team all posed for various combinations of pictures after the game, the back four made it a point to include Schmid and Hahn in the picture with the rest of the defenders.

“Michaela Hahn and Isabella Schmid are very, very good players,” Krikorian said of his strong yet silent holding mids, “and they’re team players, so they just go out and do their role and do a good job.”

High on their list of priorities on Sunday was negating the influence of Virginia’s stellar midfield, including reigning MAC Hermann Trophy winner Morgan Brian and ACC Midfielder of the Year Danielle Colaprico. Hahn and Schmid drew a line in the grass and decisively cut out many of the Cavs’ opportunities to connect with their front-runners, forcing them to go to the more direct, over-the-top style in the second half. Combining with the Formidable Four in defense, the Cavaliers were unable to press as high as usual, earning only three corner kicks all day for a team that averages more than eight in a game.

“They’re an organized team, they’re physical, they’ve got good strength and size,” Swanson said of his opponent’s defensive wall. “I thought we just didn’t move off the ball as well as we did Friday night. I didn’t think we moved the ball as well, but you have to credit their defense. I think they forced us into corners and did a good job of separating our players from the ball. We just didn’t do enough today to win the game. I thought they were better than us in every phase.”

Fortunately for Swanson and his Cavaliers, they won’t have long to dwell on the loss as the long road to a hopeful repeat appearance in the NCAA Final Four begins with Selection Monday’s bracket announcements. Swanson says the team will focus on the few weaknesses they saw over the weekend in preparation for the tournament.

Krikorian’s team will have just as little time to bask in their accomplishments as nothing but a return to the national championship game will satisfy the Seminoles. FSU have been to the College Cup in each of the last three seasons, yet they haven’t quite been able to find that perfect combination of factors that can bring the program its first national championship. The coach points to the consistently high quality of soccer his teams bring every year as a sign that they’re on the right path and hopes that if they keep doing things the right way, eventually the stars will align for his Seminole squad: