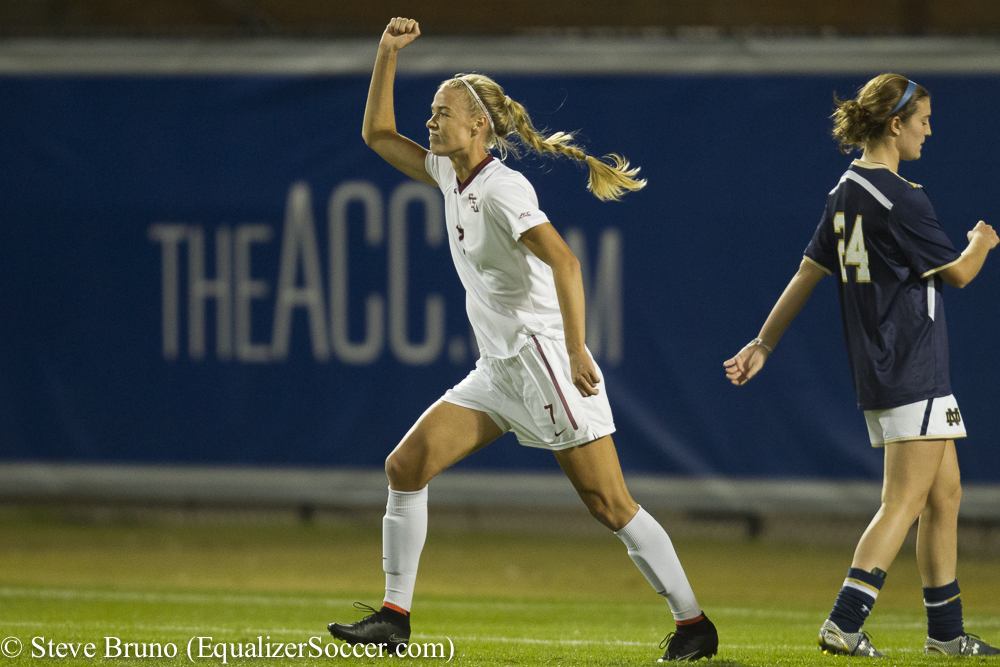 GREENSBORO, N.C. — No. 2 Florida State secured a victory in the first semifinal of the ACC Championship Friday evening and will face No. 4 Virginia on Sunday in the tournament final. FSU (17-1-1, 10-0-1 ACC) handily defeated No. 9 Notre Dame (12-5-2, 7-3-1 ACC) 3-1 in the rush hour fixture on the campus of UNC Greensboro to eliminate the Fighting Irish from the competition.

Florida State came into Friday’s early game as the top seed this year as well as defending champion. Notre Dame entered as the No. 4 seed, riding the momentum of a six-game unbeaten streak which propelled them into the tournament. The two sides have only squared off six times in program history, but two of those matches were likely still fresh in the minds of the veteran players on Friday. In 2012, a Notre Dame squad made up mostly of freshmen and sophomores punched well above their weight by bouncing Florida in the NCAA Sweet Sixteen, but their Cinderella run hit a wall in Tallahassee as the Seminoles blanked the self-proclaimed Baby Irish in the quarterfinals, 1-0. The Halloween 2013 heartbreaker, also in Tallahassee, was a season finale in which the Irish lost their grip on a 1-0 lead over Florida State with just over two minutes left in regulation and ultimately lost in double-overtime 1-2.

Unfortunately for the Irish, FSU had no intention of letting Friday’s match be nearly as close as their previous encounters. The Seminole side took command immediately and within the first few minutes, they’d already compacted the field and established a presence in front of goal. With less than two minutes off the clock, midfielder Jamia Fields took the first crack at goal for the Garnet & Gold with a header while FSU’s leading scorer Dagny Brynjarsdottir got her head on the ball under two minutes later.

“I’m not surprised that we came out and played well from the start,” FSU coach Mark Krikorian said of the team’s early attack. “We have a veteran team. It’s an experienced team and the group has done a pretty good job throughout the course of the season, from the start of the season to this point, in being focused and having a great level of concentration.”

Much of the veteran maturity the coach spoke of comes from the seven seniors on this year’s squad who have known nothing less in their collegiate careers than the pinnacle of the sport, the College Cup: finishing in the semifinals in 2011 and 2012 before last year’s stunning sudden-death loss to UCLA in the battle for the national championship.

After continued pressure and numerous assaults on Irish ‘keeper Kaela Little’s goal, one of those seniors finally broke the ice as the newly-crowned ACC Offensive Player of the Year Brynjarsdottir found the back of the net. 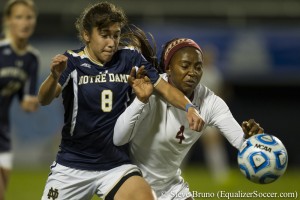 FSU set up their Nordic knockout punch in the 21st minute with one of the nation’s most lethal combinations in flanking midfielder Carson Pickett and Irish international Megan Campbell hot on her heels at left back. The two play off each other frenetically as if attached by a bungee cord and it was Campbell’s endline run that opened the space for Pickett, who received a back-pass from the fullback and whipped it into the box for the towering leap of Brynjarsdottir. The 5-foot-11-inch midfielder dunked the service past Little to put her team up less than halfway through the first 45.

The goal was Brynjarsdottir’s 14th of the season, half of which have come off her head, and moves the Icelander into second in the Florida State record book for career points with 104. Pickett and Campbell each picked up an assist for their efforts on the play, earning their team-leading 11th and eighth, respectively.

“It was good to get the goal kinda early so we could calm down and keep the ball more,” Brynjarsdottir said of her opening score. “It gave us more confidence.”

For the Fighting Irish, a team that had been backed into a corner trying to protect their collective face for the first 20 minutes, more confidence was the last thing they wanted the Seminoles to have.

“I thought the first half we came out of it flat,” Notre Dame head coach Theresa Romagnolo said of her team’s rough start. “Florida State is too good of a team to not show up and compete for everything and I think they exposed us in a lot of ways in the first half.”

Five minutes later, the Seminoles were all over ND again, as holding midfielder Isabella Shmid made a charging run at goal. The German import tried to split a pair of Irish defenders as she drove into the box, but was taken down on the play, earning a penalty kick on the foul. Although FSU’s usual PK-taker, Marta Bakowska-Mathews, had come into the game just minutes before, the Englander deferred to Campbell, who stepped up to the spot.

“With PK’s, it’s more about a feel,” Krikorian said of his left back’s spontaneous decision to take the kick, “and when the foul happened, Megan looked at me and gave me the nod. It was one of those things. I said ‘Meg, you want it?’ and she said ‘I want it’.”

Campbell struck the ball confidently and, with Little guessing wrong, easily netted the game’s second goal with no resistance.

“Megan is very good with set pieces and free kicks,” Krikorian continued. “She took set pieces for the Irish National Team long before she showed up on our doorstep. Her level of comfort hitting free kicks, I’d like to take credit for it but that probably wouldn’t be accurate. I think it was more about her having that moment and feeling as though ‘Hey, I have the courage, I’m going to step up and bury this one,’ and she did.”

The goal was a fatal blow to the Irish, who had previously only allowed one goal in the first half all year.

Despite a number of offensive weapons of their own, Notre Dame had a hard time getting any attack started. After Campbell’s goal, Romagnolo immediately brought on two subs, taking her All-ACC Second Team midfielder and team points leader Morgan Andrews out of the game.

“I was going for a different look in the center mid,” the first-year Irish coach said of her decision to rest one of her sophomore star. “For us, I really needed to make a change in the center mid and I thought at that point that I wanted to keep some of our faster players up front. Mo’s a real playmaker and we weren’t getting the ball, so we weren’t able to play-make and I needed to put some people in who I felt like, defensively, could try to win the ball for us.”

In the second half, Notre Dame began to see more of the ball and finally get a rhythm going, but midfielder Jamia Fields put the game out of reach for the underdogs in the 84th minute, when she hoofed a high, arcing ball from the right side of the box over Little’s outstretched glove. The shot was so similar to her College Cup semifinal-winning goal which went over the head of Virginia Tech goalkeeper Dayle Colpitts that you would almost think she did it on purpose, but Fields’ sheepish smile and shrug after the score suggested otherwise.

With the ‘Noles now up 3-0 and less than seven minutes left in the game, the Irish pushed hard to make any kind of meaningful impression in the scoreboard and they finally did, as Karin Simonian hit a long shot from the top of the box with a handful of seconds left on the clock.

Although the goal may not have done too much to boost spirits in South Bend, the Irish still have Selection Monday to look forward to and a restart as they head into the NCAA Tournament.

“For us these games are great because we get to measure ourselves and see where we’re at,” the Notre Dame coach said of their take-away from the semifinal loss. “On the whole we’ve had a very good season and we want to continue to learn from this experience and take that into the NCAA tournament and move on from there.”

Florida State will advance to the ACC Championship final on Sunday and will square off against Virginia. FSU won the tournament in 2011 and 2013, with the Cavaliers sandwiched between that as conference champs in 2012. The final will mark the second time they have met this season. When the two sides met in Tallahassee, the Seminoles negated UVa’s vigorous offense, allowing only four shots on goal while scoring stud Brynjarsdottir netted the game’s only goal in the 1-0 win.