Andonovski gets three-year extension at FCKC 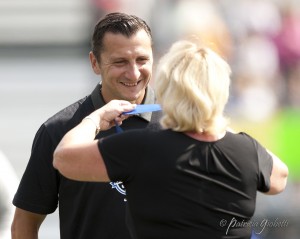 Andonovski led the club to a championship this season in year two of the national women’s soccer league. FC Kansas City’s 23 wins in the first two seasons of the league are the most among any other club.

In 2013, FC Kansas City set a record at the time with a 10-game unbeaten streak, spending much of the season atop the league before faltering down the stretch to finish second. The Blues lost to Portland at home in the 2013 semifinals.

But in 2014, FC Kansas City beat that same Portland Thorns FC team at home in the semifinals, then went on the road to Seattle to beat a heavily favored Reign FC team in the final.

It seems Andonovski had (rightfully) drawn interest for what he did in Kansas City, getting the Blues to play what was widely considered the most attractive soccer in 2013 and right there with Seattle in 2014:

Glad to have V Train in KC for the long haul. Lot of interest from outside the market & both leagues for his services http://t.co/yfl7Ro6afT

Andonovski played professionally for six seasons in Europe for clubs such as Rbotnicki FC, Vardar and Makedonija GP. He also played indoor professionally in the NPSL for the Wichita Wings and in the MISL for the Kansas City Comets, California Cougars and the Philadelphia Kixx.

Reeves retires after one season for Amazon job
Flash trade Zerboni, Williamson to Thorns for Brooks