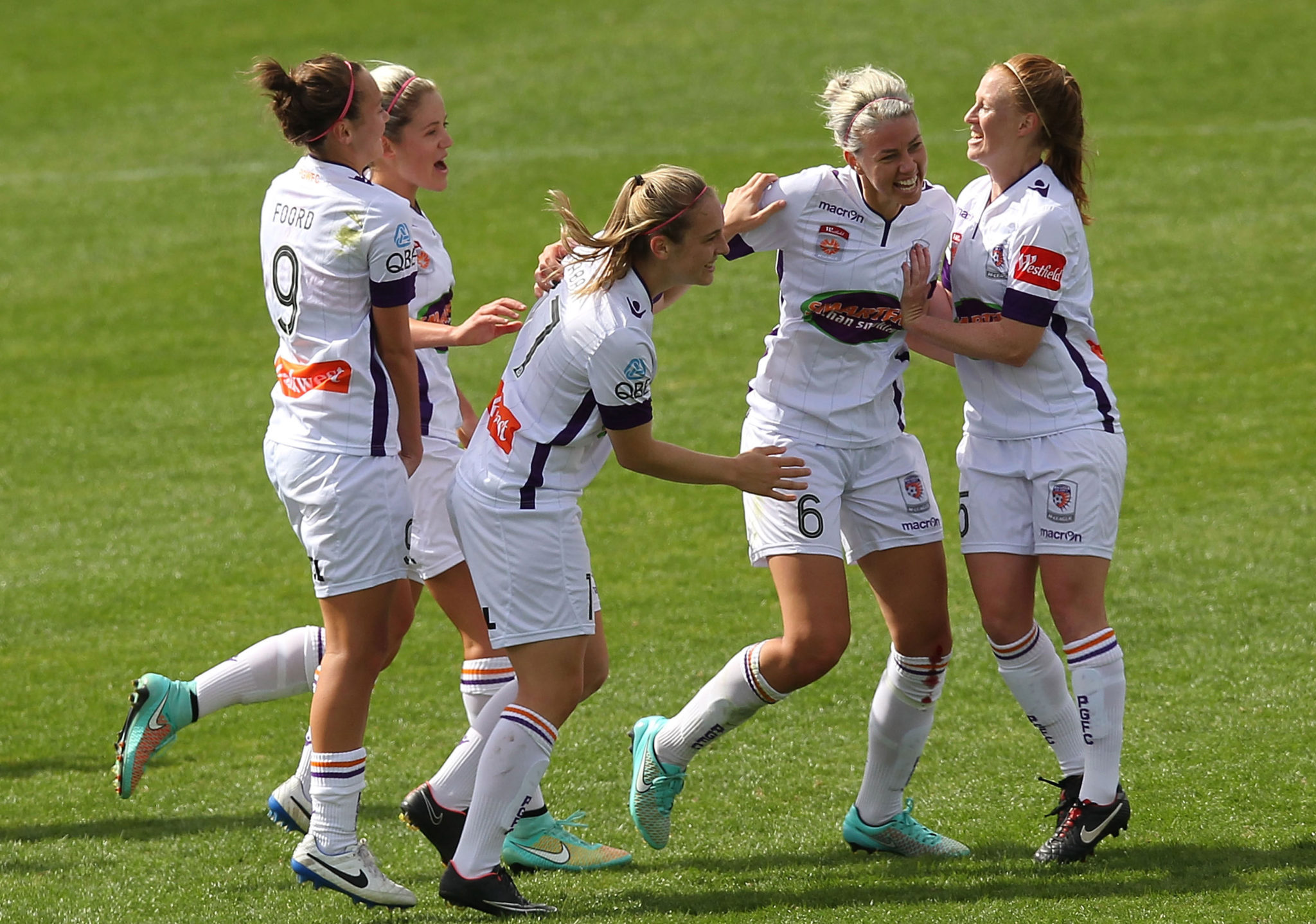 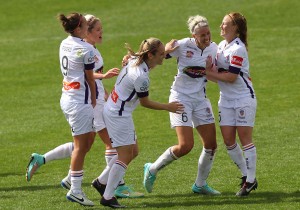 Perth Glory clinched a playoff spot with a win this weekend. (Getty Images)

Two draws on Saturday probably hurt the two sides currently in playoff positions more and helped those chasing the top four, with one-third of the season left to play. Third-place Canberra United salvaged a 1-1 deadlock with Western Sydney Wanderers at home behind an injury-time goal by Ellie Brush.

Brush appeared on a couple of occasions with the Matildas and entered this season with 11 goals in 67 W-League appearances. England native Hannah Beard scored in the 10th minute for the Wanderers. The Wanderers are unbeaten in their last two matches and have 7 points in seventh place. Canberra attracted another strong crowd of 657 fans. Americans Chantel Jones, Kendall Fletcher, Lori Lindsey and Stephanie Ochs all played 90 minutes for Canberra while Kendall Johnson and Keelin Winters played the entire game for the Wanderers.

Spencer scored another stunning late strike – her 7th of the season – for Sydney in the 85th minute, taking a pass from Renee Rollason off her chest and then volleying the ball into the net from 30 yards. Australian international midfielder Tameka Butt scored for the Roar early in the 66th minute, her third of the season and 36th in her W-League career. The Roar remain in last place in the league on 5 points, while Sydney is second on 14 points.

It was a busy five days for Melbourne Victory, who have no points to show after their two games. On Wednesday, forward Kristy Moore’s goal gave Adelaide a 1-0 win at home over the Victory. Lauren Barnes missed two penalties—though the Seattle Reign defender scored after one on a rebound—while Norwegian international and former Boston Breakers (NWSL) forward Lisa-Marie Woods scored once (another penalty kick) for Adelaide, who now have 9 points and are only three points out of a playoff spot.

On Sunday Melbourne lost again, this time to W-League leaders Perth, 3-1. Both teams had lost within the past week to Adelaide and Melbourne now has lost three in a row. The Victory sit fifth in the standings on 11 points. They are 1 point behind fourth-place Newcastle Jets, who have played two games fewer than Melbourne and who are two points behind Canberra, the third-place team. Rachel Quigley scored for the Victory (4’) while Alanna Kennedy (40’), Elisa D’Ovidio (80’) and Caitlin Foord (88’) scored for the Western Australian side, who clinched a playoff spot with the win. Perth leads the league with 21 points after eight games, 7 points ahead of Sydney FC.

Melbourne has been doubling up on fixtures to give them adequate time to participate in the 2014 Nestle International Women’s Club Championship in Japan from Nov. 30 thru Dec. 6. The third edition of the unofficial Women’s Club Championship (formerly sponsored by mobcast) has Melbourne playing a first-round match against Japan’s Nadeshiko League Champions, Yunogo Belles. Arsenal Ladies are coming this year as a UEFA representative (with Japanese 2011 World Cup-winning forward Shinobu Ohno, defender Yukari Kinga, and former WPS Boston Breakers Alex Scott and Kelly Smith). Sao Jose of Brazil is the reigning Copa Libertadores Femenina champions from South America. One other team from Japan and a to-be-determined Asian Women’s Club Championship winner will also participate in the six-team field. Bringing in Arsenal with the Japanese stars will help attendance, but Arsenal finished fourth in a very competitive FAWSL this season. Chelsea appeared last year as a replacement for UEFA Champions Wolfsburg after finishing in seventh place in the FAWSL in 2013.

One can argue that a British representative for a eight-team Women’s World Cup Championship could be justified, but only if they were league champions. As long as the current UEFA champions ignore this tournament, it reduces its legitimacy on the world stage. Olympique Lyon appeared as reigning UEFA Champions in the first edition in 2012 and won the four-team tournament. If FIFA officially recognizes this tournament as a Women’s Club Championship, then UEFA would probably insist that their Women’s Champions League titlist attend. A NWSL champion (teams on an individual level have expressed interest) would also be more likely to attend. In terms of Melbourne, despite their recent three-game skid, they have a solid side with Australian international forward and NWSL veterans Lisa De Vanna and winger Stephanie Catley along with Americans Lauren Barnes, Christine Nairn and Elli Reed. They could be positioned to make a serious run for the international championship title.