Cyprus Cup to feature up to seven WC teams 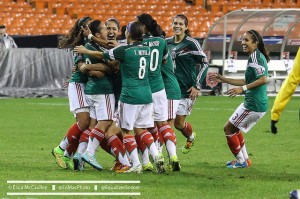 Mexico is set to play in the 2015 Cyprus Cup. (USA Today Images)

The 2015 Cyprus Cup is set and up to seven of the 12 teams participating next March will also be headed to the World Cup in Canada in June.

England, Australia, Canada, South Korea and Mexico already qualified for the 2015 World Cup. New Zealand is on the brink of World Cup qualification this week, while Scotland, the Netherlands and Italy are three of the four teams currently participating in the UEFA playoff for one World Cup spot. Ukraine is the other team in the playoff.

Match dates for the 2015 Cyprus Cup are March 4, March 6, March 9 and the placement matches on March 11. There will not be a repeat winner next year, with 2015 Cyprus Cup champion France switching to the Algarve Cup.

The Cyprus Cup is the second-tier tournament behind the Algarve Cup, both of which are the most high-profile annual women’s soccer friendly tournaments.

With France and Brazil joining the Algarve Cup for 2015, the competition is even stronger than usual. The 12 teams participating in the Algarve Cup are: Brazil, China, Denmark, France, Germany, Iceland, world champion Japan, Norway, Portugal, Sweden, Switzerland and Olympic champion USA.

Mexico’s participation in the Cyprus Cup is still to be determined, according to the Cyprus Cup website, but head coach Leo Cuellar said last week that his team will play in the tournament.