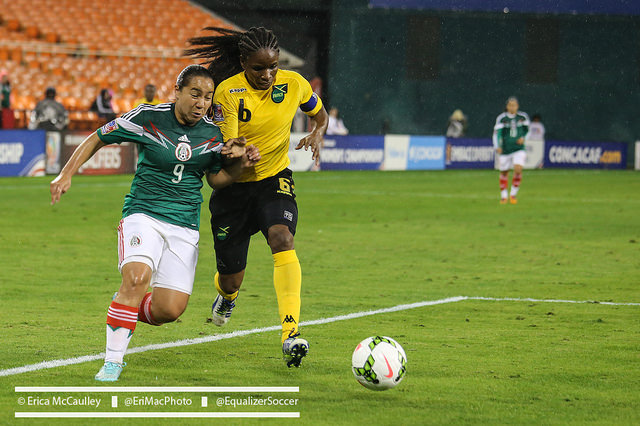 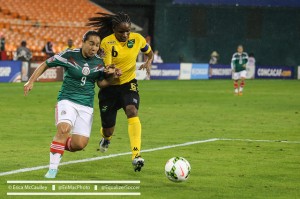 Jamaica (yellow) had Mexico on the ropes early in what could be a major stepping stone for the Reggae Girls. (Photo Copyright Erica McCaulley)

After Tuesday night’s loss to Mexico, which eliminated the Jamaican national team from contention in CONCACAF Women’s Championship and a chance to play in the World Cup, there was obviously a feeling of disappointment. But perhaps the more dominant feeling was one of determination, in turn recognizing what they had accomplished in a short period of time and what remains to be done to achieve their ultimate goal.

While it was difficult to predict what to expect from a team that was dormant for 6 years, the Reggae Girls proved to be a worthy opponent. The team gave Costa Rica its toughest game in group play and forced heavily favored Mexico to come from behind to win.

“We’re right there with World Cup teams and CONCACAF, so hopefully (we’ll keep) building on this with some younger kids, changing the mindset, changing everything. We’re going to be very competitive in the near future,” head coach Merron Gordon vowed.

The federation, and players, and the Marleys, whose support was critical in restarting the program are committed to the team for the long haul.

“It’s kind of unfortunate to end the way that we did,” midfielder Lauren Silver, who plays at the University of Florida said, “ I think we were able to get our name out there which I think is the start of anything. Everything that turns out to be big starts out little. I think coming in here people were like ‘Are you going to stay? Are you going to do this?’ Of course I am. Of course I’m going to recruit people to jump on board to be proud of their Jamaican Heritage and play for their country…”

At Saturday’s Let’s Develop Women’s Football seminar Cedella Marley, daughter of music legend Bob Marley, spoke of her decision to support the Reggae Girls and her desire to continue her support in the future.

“When you meet the girls and you realize they’re doing this just because they love to play, and they love to be able to represent their country, and if I could just help get them to that next level, let’s do it. I enjoy it,” Marley said adding, “ I hope to continue doing it for a long time to come.”

With the commitment from imperative parties seemingly in place, where do the Reggae Girls go from here?

Gordon noted that for roughly seven of his players this their first competitive tournament. Part of the plan moving forward for the team is playing matches against other international sides.

“We came in here only having a few practice games with clubs and didn’t play international countries or anything. So that’s definitely a big plan in the future. If we want to be competitive, we have to play against countries.”

Another component of Jamaica’s development is recruiting players to join the side. The vast majority of the team for this tournament came from the country’s 2006 U-19 team. Recruiting is a challenge for Gordon because a lot of top level players that are eligible for the program are also eligible to play for other, often more attractive countries.

“When you don’t have a team that’s going to the World Cup, regularly people are going to their first (choice country). For example, a player in the United States will probably want to see if the United States wants them first before they come to us, Canada and even England. We have people there who have shown interest but they are young and they are waiting to see (if) their first country calls them first.”

Jamaica currently has some Americans on its roster including Silver and forward Alex Allen. Allen currently plays at North Carolina State and notched a goal during the tournament.

Perhaps Jamaica’s showing in this tournament will help convince those young players that choosing the Reggae Girls can also lead to major international tournaments. If this CONCACAF Women’s Championship is any indication, the Jamaicans will be ones to watch in the coming years.