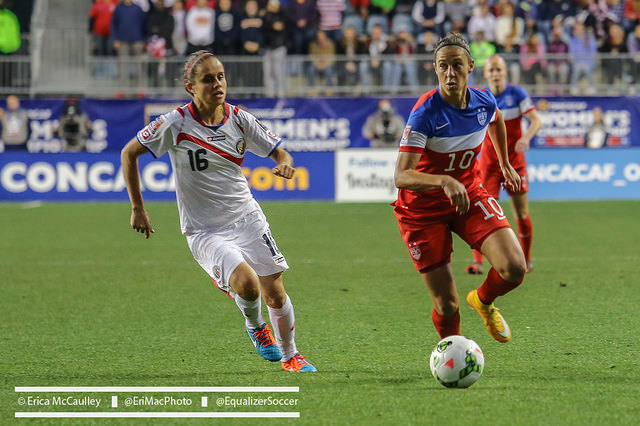 PHILADELPHIA – Playing about 35 minutes from her hometown, Carli Lloyd capped off a worldly CONCACAF Women’s Championship on Sunday with a pair of trophies: the team trophy for the United States’ triumph and the Golden Ball as the tournament’s best player.

Lloyd scored five goals and added four assists in the tournament, where she was the only American to play every minute.

“Just had fun this tournament, just played freely,” Lloyd said after Sunday’s 6-0 win over Costa Rica. “Jill (Ellis, U.S. coach) has given me the role to be able to roam and it’s been great. To do it in front of my home crowd is awesome.”

[KASSOUF: Biggest tests yet to come for USWNT on road to World Cup]

On Sunday at PPL Park – just across the Delaware River – Lloyd scored on a header in the final and returned the favor to Abby Wambach, assisting two of Wambach’s four goals. With Lauren Holiday playing as the United States’ holding midfielder, Lloyd has freedom to play higher up the field and focus on her offensive output. 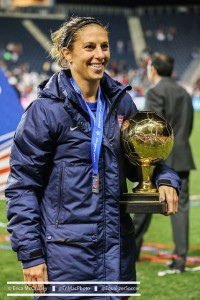 Carli Lloyd won the Golden Ball as the best player at the CONCACAF Women’s Championship. (Photo Copyright Erica McCaulley for The Equalizer)

“I think that she’s loving her role in the (No.) 8, but I think that she’s helping the team in more ways,” Ellis said. “It was once in a blue moon that Carli would get forward and get shots off, now it’s consistently every game she is getting herself behind the team’s midfield in good spots. So I think she’s taken a big step forward.

“She’s one of the most professional players I’ve ever been around. (She’s) committed. So I’m really happy that she’s being productive and she also is humble enough to know that there are certain things that we want her to get better at.”

Lloyd, a native of Delran, N.J., knows a thing or two about big moments. She scored Olympic gold-medal winning goals in the last two Olympics. Now she hopes to help deliver a World Cup title to the United States for the first time since 1999, and future opponents need heed warnings.

“This (tournament) is over and done with,” Lloyd said. “(I’ll) go home for a little bit of a break and re-focus. I’m not done, I still have a lot more that I want to accomplish.”