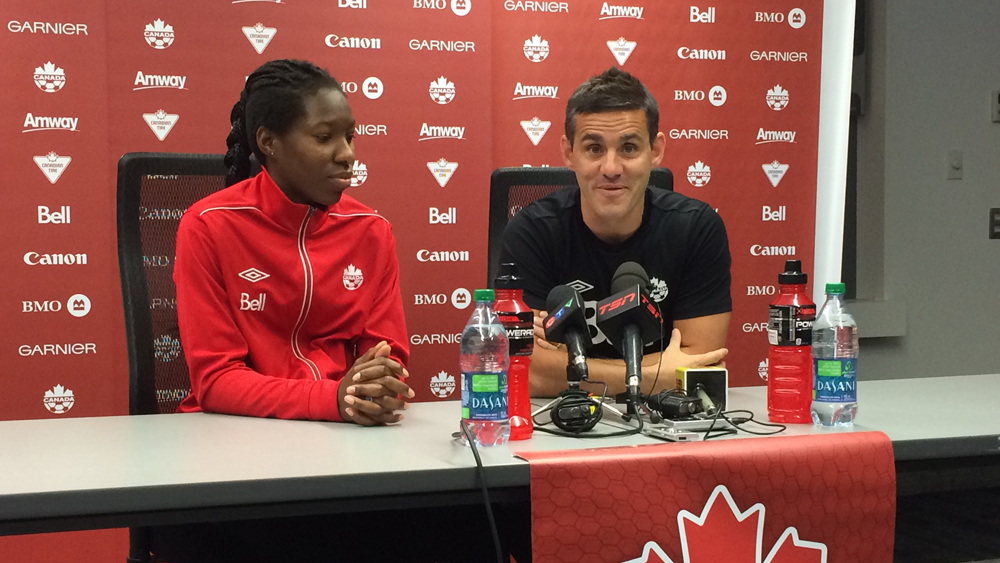 EDMONTON, Canada — The future looks extremely bright for the Canadian women’s national team. Kadeisha Buchanan has all the tools to be an exceptional central defender for years to come. The 18-year-old Brampton, Ontario, native is one of several teenagers who could make Canada’s World Cup roster next spring. Buchanan has already proven that she can go up against some of the top players in women’s football and more than hold her own.

The University of West Virginia sophomore has already earned 22 caps for her country. Her physical style of play suits the tactics and game plan Canada wants to impose on all competitors. Canada coach John Herdman isn’t shy about complimenting his players and early on he labeled Buchanan as “the Christine Sinclair of defenders.” At first Buchanan wasn’t quite sure what that meant, but now she is learning to take all of the compliments in stride as she sees the great potential in her game.

“It’s definitely a big praise,” she said Thursday, two days before a two-game homestand against world champion Japan. “From last year I’ve tried to accept the comments they’ve been giving me, because before that I was like, ‘What does that even mean?’ I’m starting to learn what that means and I’m starting to act towards it and just trying to be the leader that she is to Canada and that’s my first step.”

Abby Wambach has been on the end of Buchanan’s timely tackles, and excellent marking. Buchanan has her eyes set on Japan this week, and she knows that this Japan team presents a much different look than the United States. Japan is a speedy, dynamic and tactical side that will look to try to get the ball past Buchanan and her fellow defenders. Japan will make Canada pay if players like Buchanan aren’t careful with their tackles. The wunderkind knows she can’t be caught out of position or wildly reckless against Japan.

“You just pick and choose your moments, when to tackle, and when to get aggressive so definitely you can’t be over aggressive because they’ll definitely turn you, so you just have to find the right balance,” she said.

Buchanan, Sura Yekka, Ashley Lawrence, and Jessie Fleming all have fantastic opportunities to show what they can do against Japan and prove that they should be on the Canada World Cup roster. Canada is not afraid to show that they trust their young players, and in doing so they’ve created a healthy competition that makes everyone in camp a stronger, more determined, and better overall athlete. Buchanan is glad to be able to have some of her U-2o teammates alongside her as they all get to grow up and experience soccer at the senior national team level.

“It’s definitely great to see them back because I haven’t seen them since August since our U-20 (World Cup),” she said. “I’m definitely happy to see them and happy for them to be here and I already play with Ashley at West Virginia. It’s great to come back and be a part of the environment.” 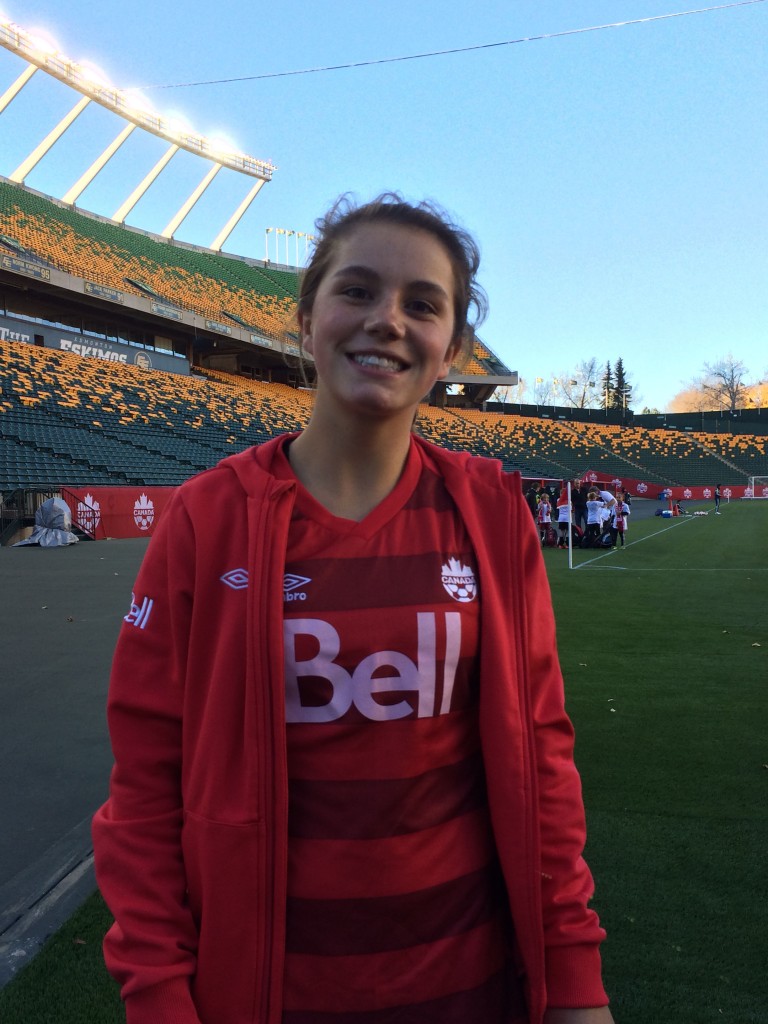 At 16 years old, Jessie Fleming is already shaping up to be a regular in the Canada lineup. (Photo Copyright Harjeet Johal for The Equalizer)

Among the teenagers making progress with Canada, Buchanan and Fleming should be the biggest locks to represent Canada at the World Cup. Fleming, a 16-year-old has four caps with Canada and has already drawn fantastic reviews. Comparisons to Christine Sinclair have popped up, but the London, Ontario, native is very gracious in recognizing what kind of player she is and how she is different from Canada’s all-time leading scorer.

“I like to think that I’m a well-rounded player,” Fleming said. “I’d like to be someone who sets up goals and someone that scores them. It’s an honor to even be compared to her. I think there’s no such thing as another Christine Sinclair because I think we’re all different players and you can’t reproduce Christine Sinclair, but that’s just such a compliment. There’s no greater compliment in women’s soccer.”

Herdman has watched Fleming shine against the No. 2 ranked team in the world, Germany. He isn’t shy about throwing his young players onto the pitch. In Fleming, he sees a unique and special talent that doesn’t come around often. Fleming’s potential, if nurtured, could help her develop into an exceptional player for many years and tournaments to come. Teenagers can run for miles and that’s something some of the veteran players simply can’t do on a consistent basis anymore. Herdman knows Fleming has an exciting ability about her and all the great attributes that you look for in a strong footballer.

“She’s pretty complete as a player,” he said. “You watch her as a midfielder and she seems to glide around the pitch. Her big test came when she came up against Germany, in that game she showed that there isn’t a game too big for her. When you talk about her qualities, what’s deceptive about her is she’s got pace and she’s actually very quick and she’s got an endurance capacity second to none. That girl can go box-to-box for more than 90 minutes and then she’s got the touch of angel. When you put that together there’s a lot there.”

At only 5-foot-4-inches, Fleming still has to grow and mature. Her game suits an opponent like Japan. The physical play of other nations might intimidate some players, but more and more often you’re seeing young quick, finesse players with brilliant pace on the pitch. Most countries don’t have a striker with the physical makeup of a Wambach, Sinclair or Lotta Schelin. Players like Fleming who are smaller and faster are in more demand. Herdman has noticed that the reigning World Cup champions and silver medal winners at the London Olympics have proven you can win with a smaller skilled players.

“I think the Japanese show you that those players can, those players that are slender,” he said. “It’s all about pace, speed of thought, and speed of mind and she’s definitely got that. Sometimes you’ve got to trust the smaller players.”

Fleming and Buchanan aren’t banking on making the World Cup roster just yet. The players will tell you it’s a competition to earn a roster spot and they’re correct. So many things can happen before June, and players in residency with Canada have a long opportunity to show what they can do. Fleming would love to play in the biggest Women’s World Cup on home soil, however she appreciates the process it takes before a team has to be named.

“It’s hard to tell, it’s so competitive and so many great players are trying out for the team. You can’t come to a conclusion now, if I did it would be an incredible experience and you just hope for the best.”

Thus far Jessie Fleming has shown she is not afraid to play against some of the players whom she once looked up to.

“She has a very strong chance,” Herdman said “Her performance against Germany sort of answered the critics who were saying, ‘Is this kid for real?’ She went in there and had an eighty-five percent pass completion rate and she had a solid solid game. I think most people really enjoyed watching her just control the ball when others were being very wasteful.”

Buchanan will turn 19 years old on Nov. 5, and already she’s feeling a bit old with Jessie Fleming in tow. The shy and quiet Fleming always has a smile on her face and that’s not just because she’s rooming with a legend.

“Kadeisha feels like she’s a grandma now when players like Jessie come in,” Herdman said jocularly. “(Fleming’s) quiet, but she’s got a great sense of humor. She’s rooming with Sinc on this tour and I think that must be pretty cool for her. She fits in and she’s always got this cheeky little smile just underneath so you know that she’s probably up to no good at times.”

Canada takes on Japan on Saturday, October 25 at 4 p.m. ET at Commonwealth Stadium in Edmonton. Both teams will again do battle on Tuesday, at BC Place in Vancouver, the site of the 2015 World Cup final.