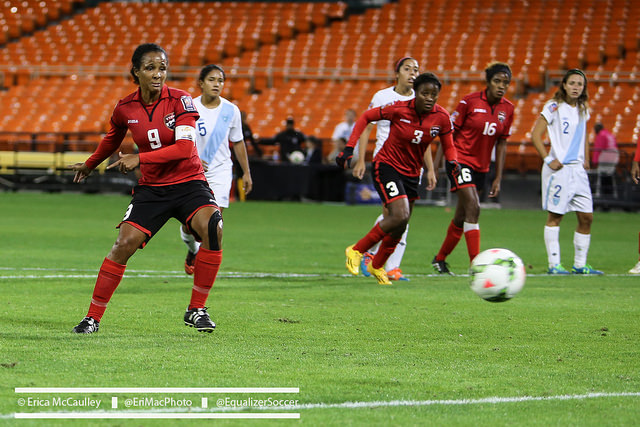 Maylee Attin-Johnson (No. 9) gets emotional thinking about Trinidad and Tobago qualifying for the World Cup. They are one win away. (Photo Copyright Erica McCaulley for The Equalizer)

PHILADELPHIA – Two weeks ago, most of Trinidad and Tobago’s women’s soccer players arrived in the Dallas with $500 that had to last them for a week. Food, lodging, transportation – everything.

Head coach Randy Waldrum, a 58-year-old American who coaches the team pro bono, didn’t know how he was going to feed his players. So he sent out a few distressed tweets, and the rest was history.

Donations set up through Houston Dash TV commentator and KeeperNotes.com founder Jen Cooper raised about $16,000. Others kicked in too, including FC Dallas, which hosted the team before it started the CONCACAF Women’s Championship tournament, where all expenses are paid for by the confederation during the World Cup qualifying tournament. The equally poor Haitian national team donated all the money it had – about $1,300 – to their Caribbean opponents, although Trinidad and Tobago gracefully returned it.

Now the Trinidad and Tobago women find themselves rewriting history. After beating Haiti and Guatemala and even giving mighty world No. 1 USA trouble in a loss, the Soca Princesses are in Friday’s semifinals, where a win will send them to the 2015 World Cup. No Caribbean nation has ever qualified for a World Cup.

[MORE: Despite adversity, Trinidad and Tobago on verge of World Cup berth]

To say Trinidad and Tobago players have poor training conditions is to assume they have many means of training at all back home. They play on water-logged fields – if they can even find vacant land – sometimes with only a few players who can make practice, or even without water.

And the players have never been paid for their efforts – until now. The federation announced that each player and Waldrum will receive a bonus of a little under $8,000 USD for advancing out of the group stage. The sum is small, but the gesture is historic.

“I’m really thankful to both the federation and to the ministry of sport for seeing what these guys have done and for being rewarded for it,” Waldrum said Thursday. 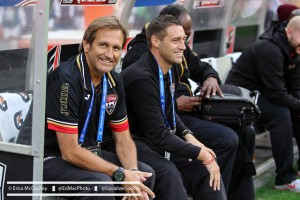 T&T coach Randy Waldrum says he is proud of his team. (Photo Copyright Erica McCaulley for The Equalizer)

There is still a job to be done, however. On Friday, Trinidad and Tobago face Costa Rica, the top finisher from Group B (three wins from three games) and arguably the most impressive team of the tournament thus far. Three of the four semifinalists will qualify directly for the Word Cup next year in Canada. The fourth-place finisher at PPL Park in Chester, Penn., this weekend will get another chance in a home-and-home playoff against Ecuador, which finished third in South American qualifying.

Trinidad and Tobago captain Maylee Attin-Johnson poetically describes her teammates’ drive to qualify for the World Cup the way a great national leader might. She is the leader of her country’s team. She is an emerging face on a once anonymous team.

“This journey started, for some of us, 10 years ago,” the 28-year-old says. “We as players have sacrificed a whole lot to this point, and I think two years ago we realized that this is our time. Most of us gave up job opportunities to prepare for this.

“I’m super proud of my players because we know that it is not a right to represent our country, but it is more privilege and honor. And every time we step on that field and hear our national anthem, we go out there and play with all of our hearts, with all of our grit, determination and courage. Come Friday, it’s the biggest game of our lives.”

Attin-Johnson sees World Cup qualification as a catalyst for change in her home country, where soccer is considered a men’s sport. She draws parallels to the United States women circa 1991. Until they won the inaugural Women’s World Cup that year, they struggled for support. Attin-Johnson wants to change attitudes on the islands, much like the U.S. women did both in their country and for their sport across the globe.

Waldrum isn’t a native, but he is invested in the Trinidad and Tobago program. He previously coached the U-17 women’s national team and says he “fell in love” with the country. Only recently did Waldrum have epiphanies that Trinidad and Tobago really could make the World Cup.

He admits to initially having some selfish initial reasons for taking in the job (Who wouldn’t want to coach in a World Cup?), but his players have won him over.

“It’s not about me and what it would do for me, it’s really, really been – and I can say this from the bottom of my heart – it’s really about seeing what it can do for these players, who have sacrificed so much,” he says of potential World Cup qualification. “And even more importantly, even though this would be huge for these players, for the football back in Trinidad and Tobago and hopefully the rest of the Caribbean countries. I think it could really be a spearhead moment that galvanizes women’s football.”

Trinidad and Tobago now have three cracks at qualifying for the World Cup. The feat could bring more rewards for the players who have poured everything into their country for, to date, very few accolades.