Mexico knows it must be perfect against the United States to have a shot in Friday’s semifinal. (USA Today Images)

WASHINGTON, D.C. — The CONCACAF Women’s Championship hasn’t gone to plan for the team that was expected to take Group B. Mexico found itself in an uneasy position after dropping its first group game against Costa Rica. Even after cruising past Martinique, the team had to overcome an early goal to get the necessary result against Jamaica on Monday and advance to the semifinals, where a win will send them to the World Cup.

On Friday night, El Tri Femenil will be in familiar territory. Mexico is in the same place it was four years ago, when the team shocked the world by beating U.S. in the semifinals of this tournament to qualify for the 2011 World Cup. Although the parallels between those qualifications and the present qualifications are striking, the 2014 tournament is also very different.

Mexico is once again heavily the underdog as the U.S. have outscored the team 24-0 in their last five meetings, however the stakes in the 2014 version of the tournament are different. Mexico can take on the mentality of underdogs but if the team team loses on Friday, it will get another opportunity at an automatic bid on Sunday in the third-place match. To put it another way, the team will get extra bite at the qualifying apple. In 2011, the winner of the third-place game — the U.S. — won only the right to a playoff for the final World Cup spot.

“We will try to have that perfect game to come out victorious and if we fall short for any reason, we would like to have that game as a good experience that makes us grow in order to accomplish what we want in the following (game),” Mexico head coach Leo Cuellar said of Friday’s semifinal matchup.

Last month the U.S. beat Mexico by the largest margin since the game in Cancun four years ago, scoring eight goals in the first of two friendlies against its border rival, but the Mexican team believes this match can be different.

“I think we have more confidence within each other now,” defender Bianca Sierra said. “We’ve been with each other the last two months training versus we only had a few weeks that game and we hadn’t seen each other in awhile so I think we’re pretty confident in our game plan and what style we want to play against the U.S.”

Despite the difficult start, the team feels like its improving as the tournament goes on. Cuellar commended the team’s resolve after giving up the early goal against Jamaica.

“One more time we had to deal with a difficult beginning taking that goal with the meaning of this match,” he said. “I think I’m very happy and I would like to recognize the collected determination and the attitude of my players that they didn’t panic.”

If Mexico falls to the heavily-favored Americans, the team will face the loser of the Costa Rica vs. Trinidad and Tobago game. Regardless of the opponent, a potential third-place game will be tough as well. Obviously, Costa Rica has proven to be a worthy opponent in dominating a considerable amount of possession in a 1-0 win over Mexico earlier in the tournament.

As for Sunday’s possible match, the team will focus on that when the time comes — after its faces the United States. For now, Mexico is focused on facing the No. 1 team in the world.

“We have a lot of work to do,” midfielder Veronica Perez admitted after Tuesday’s win over Jamaica. “We’re going watch some film, talk to the coaches and set a game plan. It’s going to be a tough game for us. I think if we go out there with nothing to lose, then we have a chance. Anything is possible.”

Anything is possible, and perhaps no one knows that better than Perez, the very player that scored the game-winner four years ago against the U.S. 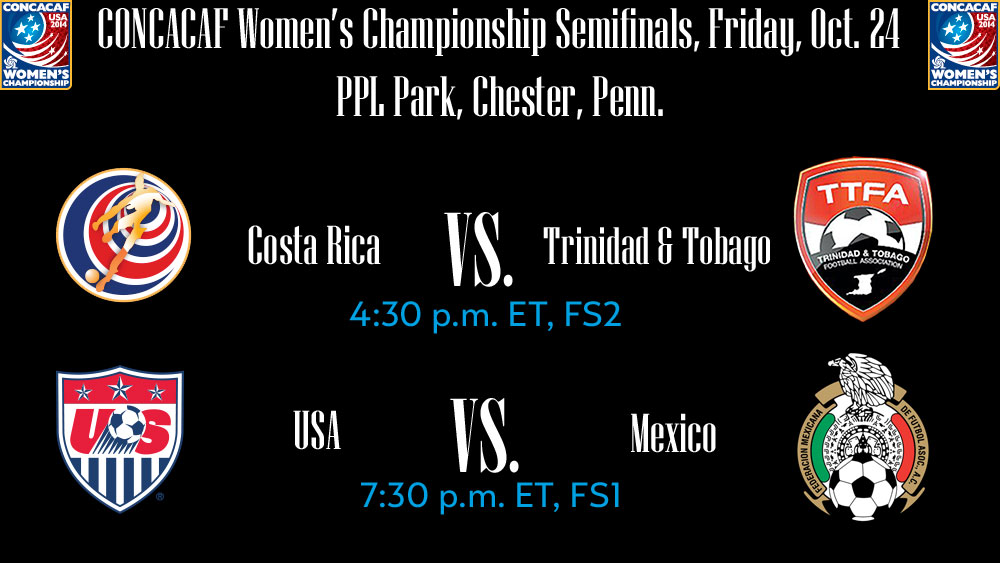 Grainey: Twenty-four hours with Haiti
World Cup berths on the line this weekend