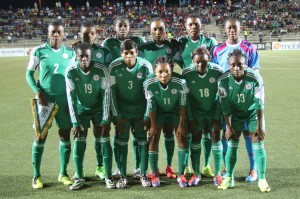 Nigeria is headed to the World Cup for a seventh straight time. (Photo Courtesy: CAF)

Nigeria is headed to a seventh World Cup and Cameroon qualified for its first-ever World Cup on Wednesday with semifinal victories in the African Women’s Championship.

Nigeria is the only African team and one of only seven teams worldwide to qualify for every Women’s World Cup in history. The Super Falcons qualified for Canada 2015 with a 2-1 win over South Africa. Asisat Oshoala, who won the Golden Boot and Golden Ball at this summer’s U-20 World Cup — where Nigeria lost to Germany in the final — scored both goals for the senior team on Wednesday.

Cameroon dramatically defeated Ivory Coast in extra time to clinch a berth. Captain Christine Manie scored in the 118th minute on a header off a corner kick. Gaelle Enganamouit opened the scoring for Cameroon in the 60th minute, but the lead lasted only six minutes before Ines Tia found an equalizer. Manie scored two minutes before the end of extra time to prevent penalty kicks.

Cameroon will play Nigeria in Saturday’s final. South Africa and Ivory Coast also play Saturday in the third-place match for Africa’s third and final spot at the 2015 World Cup. Neither South Africa nor Ivory Coast has played in a Women’s World Cup.

South Africa and Cameroon played at the 2012 London Olympics, shockingly qualifying over Nigeria, who had to watch from home.

Seventeen of the 24 World Cup berths are now secured, with four more to be determined this week (one more from CAF and three from CONCACAF).