Flash send Salem, Reynolds to Spirit for Angeli, No. 6 pick 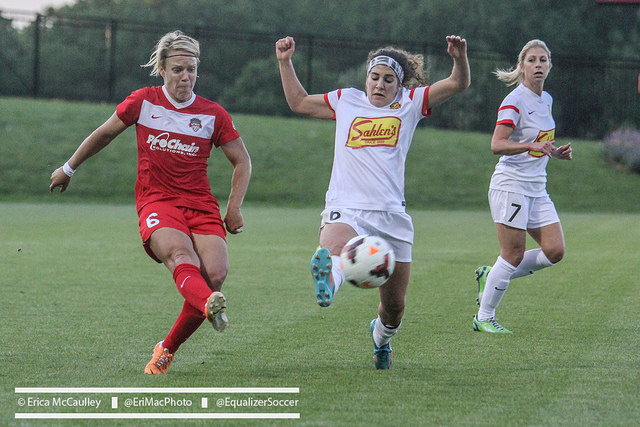 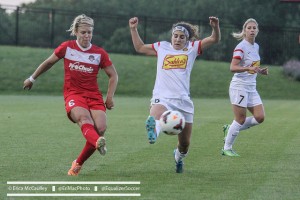 Angela Salem (center) is headed to the Washington Spirit. (Photo Copyright Erica McCaulley for The Equalizer)

The Washington Spirit have acquired Katherine Reynolds and Angels Salem from the Western New York Flash in exchange for Jordan Angeli and their 1st round pick in the 2015 NWSL Draft.  By acquiring the No. 6 pick the Flash now own three of the top seven selections having acquired what will be the No. 7 pick from the Thorns and getting the No. 3 pick following their disappointing 7th-place finish in 2014.

“We are determined to take the steps we need to compete for an NWSL title,” Spirit coach Mark Parsons said in Tuesday’s release.  “Bringing in top professionals like Katherine and Angela is a huge leap for us and I am very excited to welcome them to the club.”

Reynolds and Salem were both regulars for the Flash during both NWSL seasons.  Both also played in WPS, Reynolds for the Independence and Beat and Salem for the Beat and Sky Blue FC.  But they both flourished playing for Aaran Lines in Western New York.  They were both part of the 2012 squad that won WPSL Elite and Lines saw fit to reacquire them both when he built his NWSL roster.

Salem’s arrival could mean less playing time or a new address for Yael Averbuch who scored the seminal goal of the season for the Spirit last season but also struggled in her first season in NWSL.  With Reynolds in tow, Parsons should be able to play Crystal Dunn—when she is available—in more attack oriented positions.  Last season he was often forced to turn to Dunn to shore things up at outside back.

The Flash, clearly in rebuilding mode, will be hoping to get more minutes out of Angeli this season.  She tore her ACL in April 2011—ironically in a tackle with Reynolds, her college teammate—and missed the rest of that season plus 2012 and 2013.  She finally returned with the Spirit last season and played just 235 over 10 games and was out of the regular rotation at the end of the season.

“I’m excited to welcome Jordan to the Flash,” Lines said in a release.  “She’s an experienced player that we believe will have an immediate impact to our club and prove herself in NWSL.”

Lines promised changes after the team disappointed this season and the club has been the most aggressive early in the offseason.  Last week they traded Carli Lloyd to the Dash for Whitney Engen and Becky Edwards.