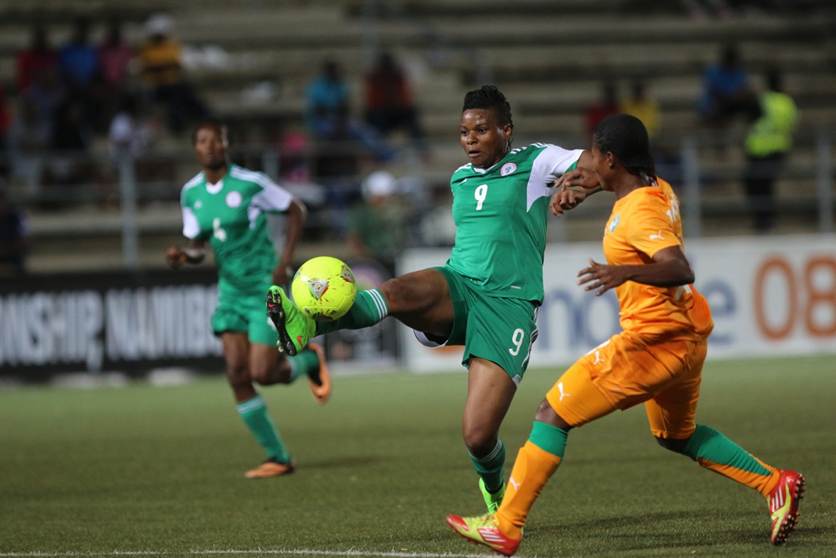 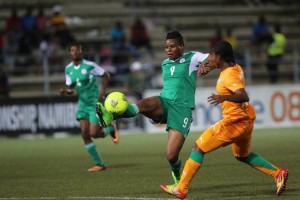 Nigeria and Ivory Coast are through to the semifinals of African World Cup qualifying. (Photo Courtesy CAF)

World Cup qualifying in Africa is down to the final four teams, and there are guaranteed to be at least two newcomers from the continent at Canada 2015.

Cameroon, Ivory Coast, Nigeria and South Africa qualified for the semifinals of the CAF Women’s Championship in Namibia by finishing in the top two of their respective groups. The top three teams will advance to next year’s World Cup.

Nigeria is the only African nation to have qualified for every World Cup. None of the other three teams in the final four have ever been to the World Cup, but at least two will make it there in 2015, thanks to the expanded field of 24 teams.

Nigeria won Group A of qualifying with a perfect record, while a win and a draw was enough to send Ivory Coast through.

Cameroon won the group despite losing to Ghana, 1-0 on Saturday. The victory wasn’t enough to send Ghana through to the semifinals, however, since South Africa beat Algeria 5-1, obtaining a superior goal differential.

South Africa will play Nigeria in Wednesday’s first semifinal, and Cameroon will take on Ivory Coast in the nightcap. The winners of those two matches will qualify for the 2015 World Cup. The two semifinal losers will play in a third-place match for the final berth.

Cameroon and South Africa made history by qualifying for the 2012 London Olympics. It was the first time an African nation other than Nigeria participated in women’s soccer at the Olympics, and it sparked further investment in the sport in the two countries. South Africa — known as Banyana Banyana — infamously tied Japan at the 2012 Olympics in a match Japan intentionally tied in order to seek a more favorable travel schedule for the knockout round.