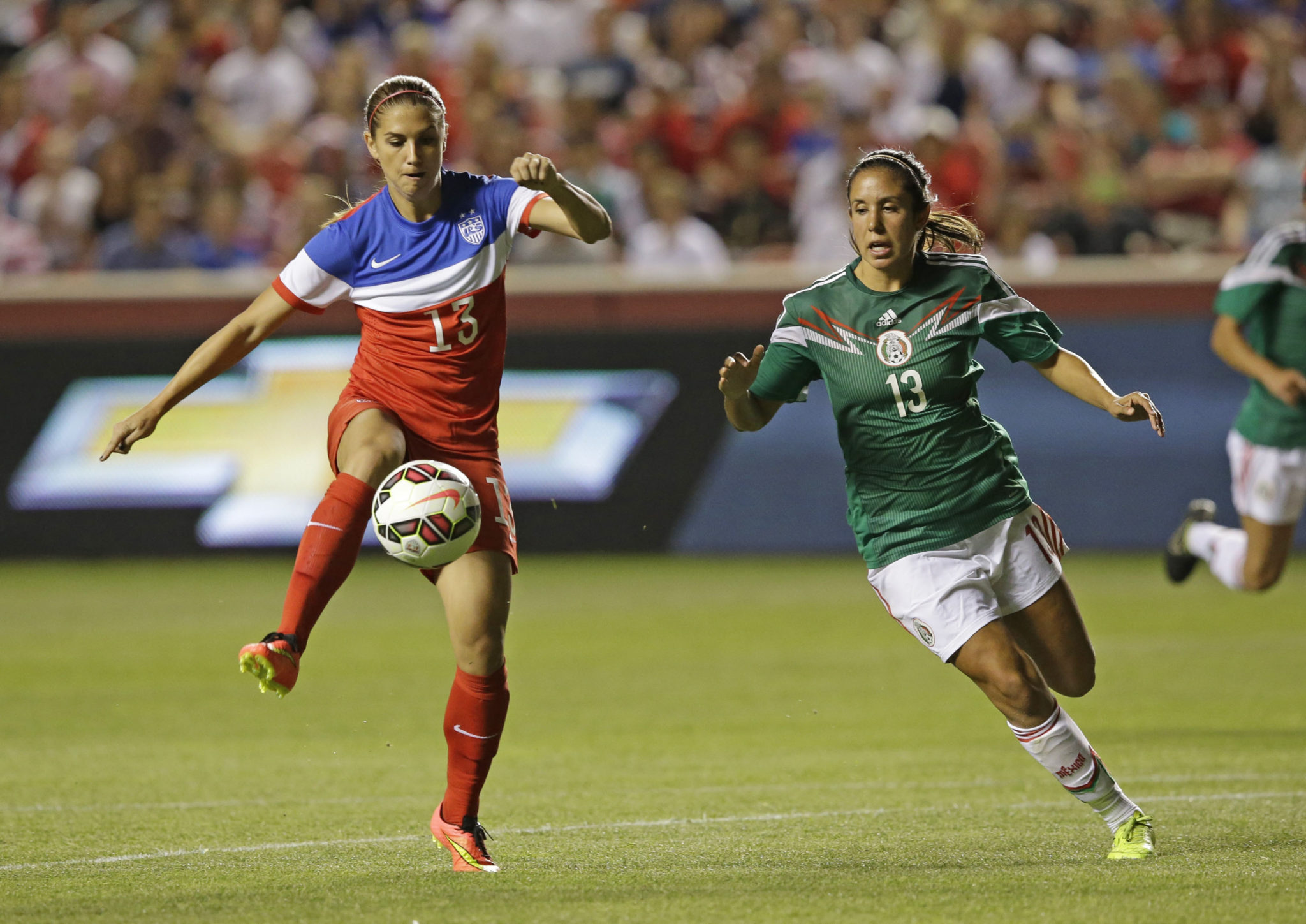 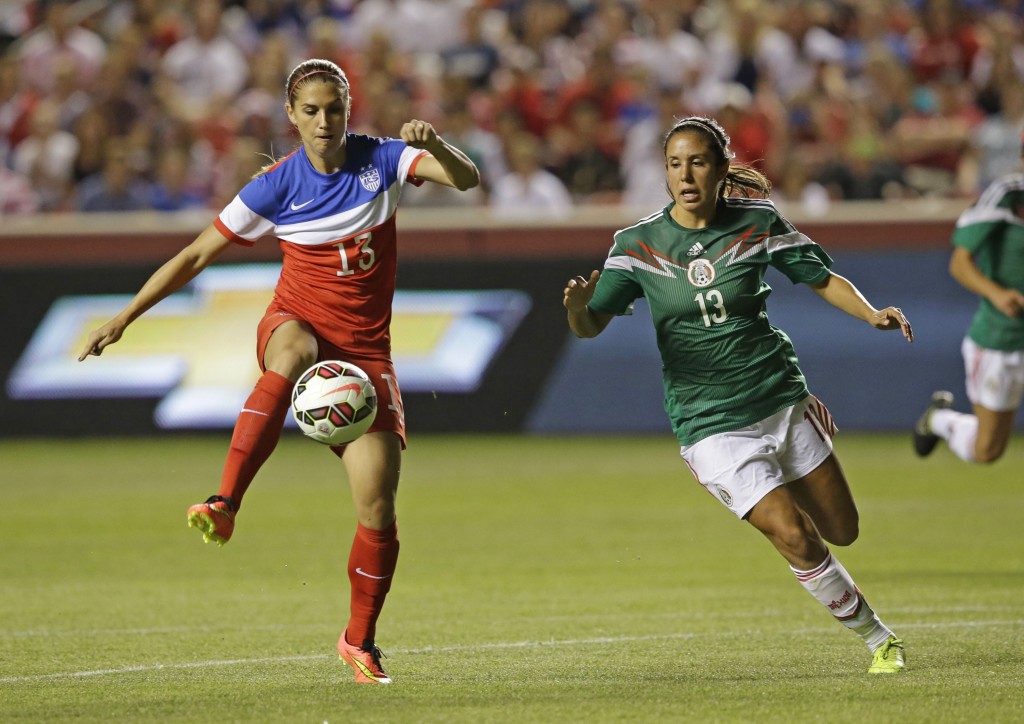 Alex Morgan and the U.S., as well as Bianca Sierra and Mexico, are favorites to advance to the World Cup. (AP Photo)

The CONCACAF Women’s Championship – which doubles as World Cup qualifying – starts Wednesday, with three automatic berths to Canada 2015 on the line. The fourth-place finisher will get one last shot at the 2015 World Cup in a playoff against Ecuador, the third-place finisher from South America.

CONCACAF qualifying takes place across four U.S. cities – Kansas City, Kan.; Chicago; Washington, D.C. and Chester, Penn., outside of Philadelphia. The top two teams from each of the two groups of four teams will advance to the semifinals in Chester. The tournament was originally scheduled to take place in Mexico before being changed in the spring.

In Group 1 with the U.S. is Trinidad & Tobago, Guatemala and Haiti. Group 2 features Mexico, Costa Rica, Jamaica and Martinique (which can’t qualify for the World Cup since it is not a FIFA-sanctioned nation).

The United States is the world’s No. 1-ranked team for six years running. The U.S. women have not lost a game on home soil since Nov. 6, 2004, a streak that now sits at 87 games (76-0-11). Jill Ellis leads the U.S. into her first major tournament as head coach after taking over for Tom Sermanni, who was fired in April.

All of this is the tangible start to the process of the U.S. trying to win the World Cup for the first time since that glorious 1999 edition that now hangs over the current team’s (winners of three straight Olympic gold medals) heads as much as it resonates as a shining moment.

Goalkeeper Hope Solo is on the United States’ 20-player roster as she awaits a Nov. 4 court date on charges of domestic-violence assault. Julie Johnston officially replaced former U-20 teammate Crystal Dunn on the roster after Dunn was diagnosed with a sprained MCL in her right knee.

Here are five things to know about World Cup qualifying:

Four years ago, the U.S. was the last of 16 teams to qualify. The Americans suffered a shocking loss to host Mexico in the semifinals, and then had to win the third-place match and beat Italy in a home-and-home playoff series to make it to the 2011 World Cup. There, they lost to Japan in the final. But this qualifying event is nothing like the last. The 2015 World Cup will expand to 24 teams for the first time ever, opening up 3.5 spots for the CONCACAF region. Plus, Canada won’t even take up one of those spots as the World Cup hosts qualify automatically. Oh, and the U.S. is on home soil, where that whole 87-game unbeaten streak is alive and well. Mark it down: The U.S. will qualify easily.

Yes, they are playing on grass

All four qualifying venues are MLS stadia featuring natural grass. Several of the U.S. women have vocally opposed the use of artificial turf at the 2015 Women’s World Cup, and Abby Wambach, Alex Morgan and Heather O’Reilly are listed in the complaint recently filed in the Human Rights Tribunal of Ontario. Players and their lawyers seek to have the six Canadian venues being used for the World Cup changed to natural grass fields for the tournament, citing gender discrimination. Every men’s senior World Cup has been played on natural grass.

Yes, they really are playing this whole tournament in 12 days

It’s absurd. It’s disrespectful. It’s even dangerous. But CONCACAF’s World Cup qualifying tournament runs wire-to-wire in just 12 days. The two teams that make it to the final of the CONCACAF Women’s Championship will have played five matches in those 12 days, which is not healthy. For perspective, Europe’s qualifying process – run more like the men’s qualifying setup – still hasn’t finished, and it started with preliminary rounds in April 2013. But South America and Africa also run short tournaments – Asia’s is about one month long – and the Oceania qualifying process is an embarrassing three-game, round-robin formality for New Zealand against three teams that have been inactive for over 18 months. So…it could be worse?

Mismatches are abundantly clear here: there’s the U.S. and then everyone else, a country-mile behind. Mexico is considered the established No. 2 at the tournament in Canada’s absence, but Las Tri brings an inexperienced team to qualifying, and the somewhat mysterious Costa Rica and Caribbean nations might have something to say about that. The U.S. is 22-1-0 all-time (you know, that 2010 loss to Mexico), scoring 137 goals and allowing only five – that’s a plus-132 goal differential. The last time the U.S. played group opponent Guatemala was at 2012 Olympic qualifying, when the Americans won 14-0.

But expect at least one Cinderella story

No Caribbean nation has ever qualified for the Women’s World Cup, but that stands a decent chance of changing by the end of October. Trinidad & Tobago won the Caribbean Cup to get to this point, and dream of the World Cup despite almost no funding. Similarly, Haiti has nothing, and the odds there are even more against that team qualifying. And then there is Jamaica, Caribbean runner-up, funded in large part by Cedella Marley – one of Bob Marley’s daughters – who wants to empower the women of her country. That’s not to mention Costa Rica and Guatemala. The working theory is that the United States and Mexico are locks for the World Cup, which leaves one more automatic bid and a playoff spot. There stand to be great stories from this qualification tournament.