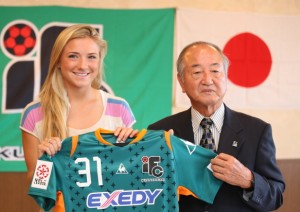 Kristie Mewis will play for Japanese club Iga through the end of the year. (Courtesy: Iga FC)

Kristie Mewis signed with Japanese club Iga FC Kunoichi through Jan. 2, 2015. Mewis, who plays for the Boston Breakers in the NWSL, was officially introduced on Saturday, three days after the club announced the signing of Portland Thorns FC defender Rachel Van Hollebeke.

Van Hollebeke will also return to the United States by the new year. The deals are not technically loans, but deals outside of their U.S. Soccer contracts (which also encompass their NWSL deals).

Mewis spent last week training with the United States women’s national team prior to departing for Japan. Both she and Van Hollebeke were left off the United States’ World Cup qualifying roster. Qualifying begins on Wednesday.

Mewis played in 17 games for the Breakers in 2014, starting 15 while scoring three goals and adding two assists.

Iga FC Kunoichi has won the first-division championship twice, in 1995 and 1999. The team finished fourth in the Nadeshiko League last season, but is locked into a relegation battle this year.