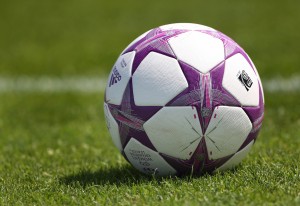 The battle to win Europe’s club championship began with the Round of 32 1st legs this week.  (Getty Images)

The opening legs of the UEFA Women’s Champions League Round of 32 played out closer than expected over Wednesday and Thursday with the shocker coming in Kazakhstan where a late equalizer was enough to hold Frankfurt to 2-2.  Here is a brief recap of each of the 16 matches.  Home sides are listed first and the return legs are next week.

BIIK-Kazygurt 2, Frankfurt 2:  The three-time champions outshot their Kazak hosts 37-8 but settled for a draw after Nikoleta Nikolic converted a dramatic, stoppage time equalizer to offer some semblance of drama ahead of the return leg.  Kazygurt took a lead early in the second half through Gulnara Gabelia, but it looked like Frankfurt would win it after Veronica Boquete equalized and Dzsenifer Marozsan scored the go-ahead goal in the 85th minute.

Liverpool 2, Linkoping 1:  Liverpool scraped to a win on their debut in the competition, taking it 2-1 on Natasha Dowie’s 73rd minute match-winner.  Former Western New York Flash midfielder Gemma Davison had put the Reds on top less than a quarter hour into the tie, but a 37th minute equalizer from Kristine Minde left the result in doubt for the much of the day.  Linkoping will be feeling good about flipping the results back in Sweden having outshot their opponents and left town with what could prove a vital away goal.

Stabaek 0, Wolfsburg 1:  Captain Nilla Fischer scored in the 56th minute to give the German side a successful start in their quest to be the first club to win the Champions League three years running.  The score was close, but the stat sheet shows Wolfsburg outshooting their hosts 21-4 and coming close on several occasions.  They will be a heavy favorite to go through when the action shifts to their home park next week.

Apollon 1, Brondby 0:  Lianne Sanderson converted from the spot at the dawn of stoppage time to give the Cypriot champions a win in what was an evenly contended affair.  18-year old Antri Violari came off the bench in the 81st minute and drew the foul on Mie Jans that led to the spot kick.  This figured to be one of the more dramatic return legs. 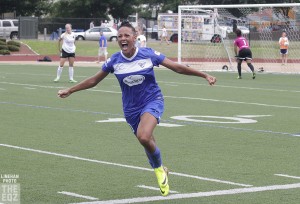 Brescia 0, Lyon 5:  The most lopsided match of the sequence was never close.  Louisa Necib, Lotta Schelin, and Wendie Renard (23rd) scored to put it away early and Eugenie Le Sommer added a 2nd half brace.

Stjarnan 2, Zvezda 2005 5:  Jose Nahi, a 25-year old from Ivory Coast, scored four goals to lead the Russian runners-up to an away rout in Iceland.  Nahi scored twice in the first dozen minutes and a hat trick after 39.  Stjarnan twice got back to within a goal, first through Harpa Thorsteindottir and again through Kristrun Kristjansdottir.  But Nahi added her 4th in the 89th and Daryna Apanaschenko hit a penalty in stoppage time to add to the damage.

Raheny 0, Bristol 4:  Natasha Harding scored once in each half and Bristol added two in stoppage time to make it a blowout.  Nicola Watts scored from the spot in the 92nd minute and Natalia added another in the 94th.

Ryazan-VDV 1, Rosengard 3:  Marta scored what proved to be the match-winner as the Swedish side grabbed a commanding lead in their away leg in Russia.  Marta made it 2-0 a dozen minutes after Katrin Schmidt scored the opener early in the 2nd half.  Ryazan captain Ksenia Tsybutovich pulled one back but a stoppage time goal by German Anja Mittag made it 3-1 and a near impossible task for the Russian club heading to Sweden.

Medyk Konin 2, Glasgow City 0:  The visitors carried a narrow shot advantage but conceded the only two leaving a two-goal deficit to overcome next week.  Ewa Pajor and Aleksandra Sikora scored less than 10 minutes apart in the 2nd half to account for the final scoreline.

Gintra 1, Sparta Prague 1:  A pair of youngsters scored in a 1-1 draw that leaves things up for grabs next week in Prague.  Kamile Vaiciulaityre, 20, scored off the bench in the 81st minute to rescue the hosts, but she was the senior scorer on the day as 17-year old Karolina Krivska put Praha ahead late in the opening half.

MTK 1, Neulengbach 2:  Daniela Tasch’s goal two minutes into the 2nd half was the dagger that gave the away side the victory in the opening leg.  Tasch made it 2-0 after Nina Burger of the Dash had staked the Austrians to a 1st half lead.  MTK battled on and Rita Mery gave the Hungarian fans something to cheer about in the 61st but they still need an away win to go through.

Osijek 2, Zurich 5:  Osijek went ahead twice only to be steamrolled in the 2nd half thanks in part to an own goal charged to the captain Dragica Cepernic.  They led must of the 1st half after Maja Joscak put them on top after only 10 minutes.  But Fabienne Humm scored deep in stoppage time to send the teams to the break on level terms.  Mateja Andrlic gave the Croat side another lead at 52 minutes but 18-year old Barla Deplazes answered less than two minutes later.  Humm then scored the game-winner in the 66th and the own goal came three minutes later.  Another 18-year old, Meriame Terchoun, added the 5th in the 88th.

Slavia Prague 0, Barcelona 1:  Defender Ruth Garcia broke a scoreless draw in the 82nd minute to spoil the day for the home side.  Flash forward Sonia Bermudez played the first 68 minutes for Barcelona.

Pomurje 2, Torres 4:  Pomurje rallied from 2-0 down only to leave home in the same hole when Joana Flaviano and substitute Veronica Maglio answered with 2nd half goals.  Paula Serrano and Romina Pinna gave Torres the lead with goals at 15 and 30 minutes.  Pomurge managed only 6 shots over 90 minutes to 21 for their guests, but two quick ones went for goals, Mateja Zver in the 53rd and Manja Rogan in the 55th.

Twente 1, Paris 2:  Paris scored twice inside 20 minutes and held on for a 2-1 away victory in what was expected to be one of the tighter ties in this round.  Kosovare Asllani, formerly of the Chicago Red Stars, scored in the 10th minute and Shirley Cruz Tania doubled the lead in the 19th.  Ellen Jansen salvaged some hope for Twente with a goal just after an hour.

Ouriense 0, Fortuna 3:  The Danish champions rolled to a 3-0 away win capped by Sky Blue wunderkind Nadia Nadim’s 81st minute penalty.  But the damage was done when captain Sofie Pedersen and Line Jensen scored in consecutive minutes late in the opening 45. 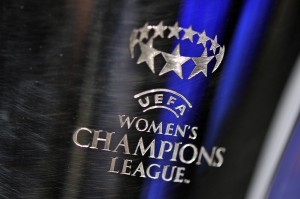 Followers of North American players who play abroad should focus on the progress of two of the 10 clubs who advanced to the 2014-15 UEFA Champions League Round of 32 knock-out phase held from August 9-14. The 10 teams advancing were the 8 group-winners and the top two second-place teams (based on their record versus the first and third place teams in their group).

European debutant KKPK Medyk Konin of Poland features American/Croatian defender Helenna Hercigonja-Moulton, who The Equalizer featured in May. Hercigonja-Moulton transferred to the Polish side from Croatian side Dinamo Maksimir of Zagreb after finishing college in Croatia. KKPK Medyk Konin won their Women’s Champions’ League preliminary group over WFC SFK 2000 Sarajevo of Bosnia-Herzegovina, Aland United of Finland and ZFK Kocani of Macedonia. Other imports on the Polish Cup winning side are defender Radoslava Slavcheva of Bulgaria and Sandra Zigic, a midfielder from Croatia.

One of their most talked about players is 17-year-old Ewa Pajor, who scored four goals in their win over Aland United and was a leading light with Poland’s Euro U-17 Championship team. Medyk Konin’s progress to the round of 32 was impressive given that this was their first-ever European competition and they were the only one of six debuting teams who made it out of the preliminary phase, as Amazones Dramas AS of Greece, FC Minsk of Belarus, FC Hibernians of Malta, Rīgas FS of Latvia and ŽFK Kochani of Macedonia all failed to advance.

Apollon Ladies FC of Cyprus also advanced from the preliminary round of the Women’s Champion’s League — for the fifth consecutive year — with three Americans on their roster during the preliminary phase. Defender Michelle Cruz played at the University of Portland and with the U.S. and Puerto Rico at the youth level. Midfielder Carlie Davis and forward Hanna Gilmore both played at Baylor University. Gilmore trained with the Chicago Red Stars in NWSL in 2013 and the Boston Breakers in 2014, while Davis was a practice squad player for the Portland Thorns both seasons. Gilmore scored against Gintra Universitetas of Lithuania in August.

Scotland’s Glasgow City FC had four imports: goalkeeper Nikola Dieter of Australia, who played with Sydney FC, defender Julie Nelson of Northern Ireland (formerly with Everton), Denise O’Sullivan of the Republic of Ireland and American midfielder Ella Stephan, who played at Florida State U, Pali Blues (W-League) and New England Mutiny (WPSL). A new addition on loan for the fall is FC Kansas City forward Morgan Marlborough (who scored two goals in nine games for the Blues). Glasgow hopes to again make the round of 16, as they did a year ago.

Three teams advanced from the preliminary rounds comprised entirely of domestic players: Switzerland’s FC Zurich, MTK Hungaria FC and ZNK Osijek of Croatia. MTK advanced out of the qualifying round for the fourth time in five years.

Club Atletico Ouriense of Portugal’s only import was forward Manaus of the Cape Verde Islands, while Raheny United FC had a midfielder from Iceland, 27-year-old Ingunn Eiriksdottir. Gintra Universitetas of Saiuliai, Lithuania, was the top second-place side and made the round of 32, but only through an injury-time fifth goal to defeat KS Vllaznia of Albania 5-0, which allowed them to slide ahead of Romania’s CFF Olimpia Cluj on goal difference. It was the first time the 11-time domestic champion had ever advanced in Europe. The Lithuanian side used five imports, including goalkeeper Ina Budestean of Moldova, African defenders Laetitia Chapea of Equatorial Guinea’s 2011 WWC team (who previously played at Medyk Konin in Poland) and Nigerian international Florence Ajayi (who has played club ball in Nigeria, Germany, China, Slovenia, Poland and Spain) and midfielders Kristina Petrunova of Bulgaria and Ana Alekperova of Azerbaijan.

ZNK Pomurje of Slovenia has five Croatians on their roster and advanced as the second placed runner-up, moving ahead for the first time after three previous attempts were unsuccessful.

A few teams who did not advance to the next round had North Americans on their squads. Finland’s Aland United’s defender Katie Kelly (ex-Marquette University) played seven matches for FC Kansas City in 2013, after spending time with FC Indiana (WPSL) and Kristianstads in Sweden’s Damallsvenskan. Forward Megan Lindsay (ex-Seattle Pacific University), who won a title last season in Iceland with USF Stajrnan, was also in the mix. U.S. forward Monica Dolinksy has played professionally in Finland and Sweden after her collegiate career at the University of Kansas. Midfielder Sarah Robbins was a youth international with Canada and also a Jayhawk alumna. Former University of Missouri midfielder Janelle Cordia played three years with Aland before transferring this season to Fortuna Hjorring in Denmark. Other imports for Aland include goalkeeper Sanna Ahlander and defender Kim Sundlov—both of Sweden—and defender Pille Raadik of Estonia, along with Nigerian international forward Cynthia Uwak, who has played in Finland, Sweden, Germany and France and was a two-time African Player of the Year. Aland’s head coach is Gary Williams of England. He played at Lindsey Wilson College in Louisville, Ky.

A few teams who did not advance had interesting stories: Faroese Islands title holders Klaksvíkar Ítrottarfelag are the only club to have entered all 14 editions of the Women’s Champions League/UEFA Women’s Cup but has never advanced from the first stage.

Missing from this Champion’s League season’s lineup is Arsenal LFC, who has reached the quarterfinals 11 years in succession, and both of last year’s beaten semi-finalists: fellow FA WSL team Birmingham City LFC and 1. FFC Turbine Potsdam.

The draw for the next two rounds and the full calendar for the Women’s Champions League for 2014/15 are below: