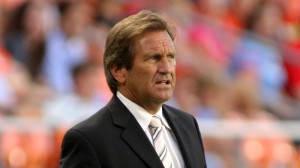 Upon getting word that the Trinidad and Tobago women’s national soccer team might not even have enough money for lunch, Haiti’s team took a look at its fundraising for World Cup qualifying – an account totaling a little over $1,300 – and decided to turn it over to the competition.

That left Haiti with an uncertain future of its own. Until the Clintons got involved.

Both Trinidad and Tobago and Haiti are training for next week’s CONCACAF championship, which serves as qualifying for the Women’s World Cup next year in Canada. Haiti opens the eight-team tournament on Wednesday against Guatemala in Kansas City, Kansas, while Trinidad and Tobago faces the top-ranked U.S. women’s team.

“I need HELP! T&T sent a team here last night with $500 total. No equipment such as balls, no transportation from airport to hotel, nothing,” the post read.

Waldrum said Thursday that his players got breakfast at their hotel in Dallas, where they are training, but he didn’t know where lunch was going to come from. So he got dramatic.

“I thought, `I’ve got an hour to find meals, to get us through the day, let alone the next five or six days,'” he said. “The only way I knew to do it was to send the tweet out, and I knew I couldn’t say, `Hey, T&T is in need of money, will you help donate?”

His posts went viral quickly. The soccer website KeeperNotes.com reached out to Waldrum and by Wednesday night had collected just over $9,300 for the team via a PayPal account. Jen Cooper, who runs KeeperNotes, said because of the overwhelming response the site had to stop taking donations because of tax implications.

Haiti’s team also heard Waldrum’s plea from its training camp in South Bend, Indiana. The team had been running on donations and money raised from T-shirt sales and other fundraising. It had $1,316 in its account.

The team, which has had its own financial struggles, decided to give it all to Trinidad and Tobago.

“My players saw on social media the difficulties faced by T&T players and approached me about what can we do to help. I was stunned,” Haiti coach Shek Borkowski said in announcing the donation on the team’s Facebook page. “They were very animated about helping so I will do as they asked.”

That’s when Borkowski heard bombshell news: Haiti’s soccer federation received a call from the Clinton Foundation, the charitable organization run by former President Bill Clinton and his family, saying it wanted to support the women’s program.

Borkowski said he’s been told to come up with a list of immediate needs for the team and a long-term budget. He hasn’t been given a specific dollar figure.

“They told us they’re ready to step up not just one time, but long term support for women’s soccer in Haiti,” Borkowski said in an interview Thursday. “That’s exciting information for us. We’ve been doing whatever we can to get by.”

Craig Minassian, a spokesman for the Clinton Foundation, said in an email that the organization decided to help after reading about the Haiti team.

“The Clinton Foundation and Partners In Health, who received similar inquiries, have spoken with the team and are helping connect them with interested supporters,” he wrote.

Borkowski said that without the financial help, if the team didn’t qualify for the World Cup, it would have likely been disbanded following the CONCACAF tournament.

Both Waldrum and Borkowski coach their teams as volunteers.

Trinidad and Tobago’s soccer federation, which had to find the funds to pay for the team’s visas, was already working to secure additional money for the team when the plea went out. The country’s Sports Ministry and a sponsor say they have since sent $40,000, but Wadrum said Friday morning that it is yet to arrive.

While Waldrum may have stepped on a few toes with his unconventional fundraising, his team can keep training in its quest to reach women’s soccer’s biggest stage for the first time. And they can eat.

“Our players have not made a penny in their national team careers. They’ve given up so much. I just felt like you know what, I’ve got to try to do something to help them,” Waldrum said. “It would have been easy to walk away with the lack of funding, but when I look at this team I think they deserve this chance, and I’m going to fight to the end for them.”