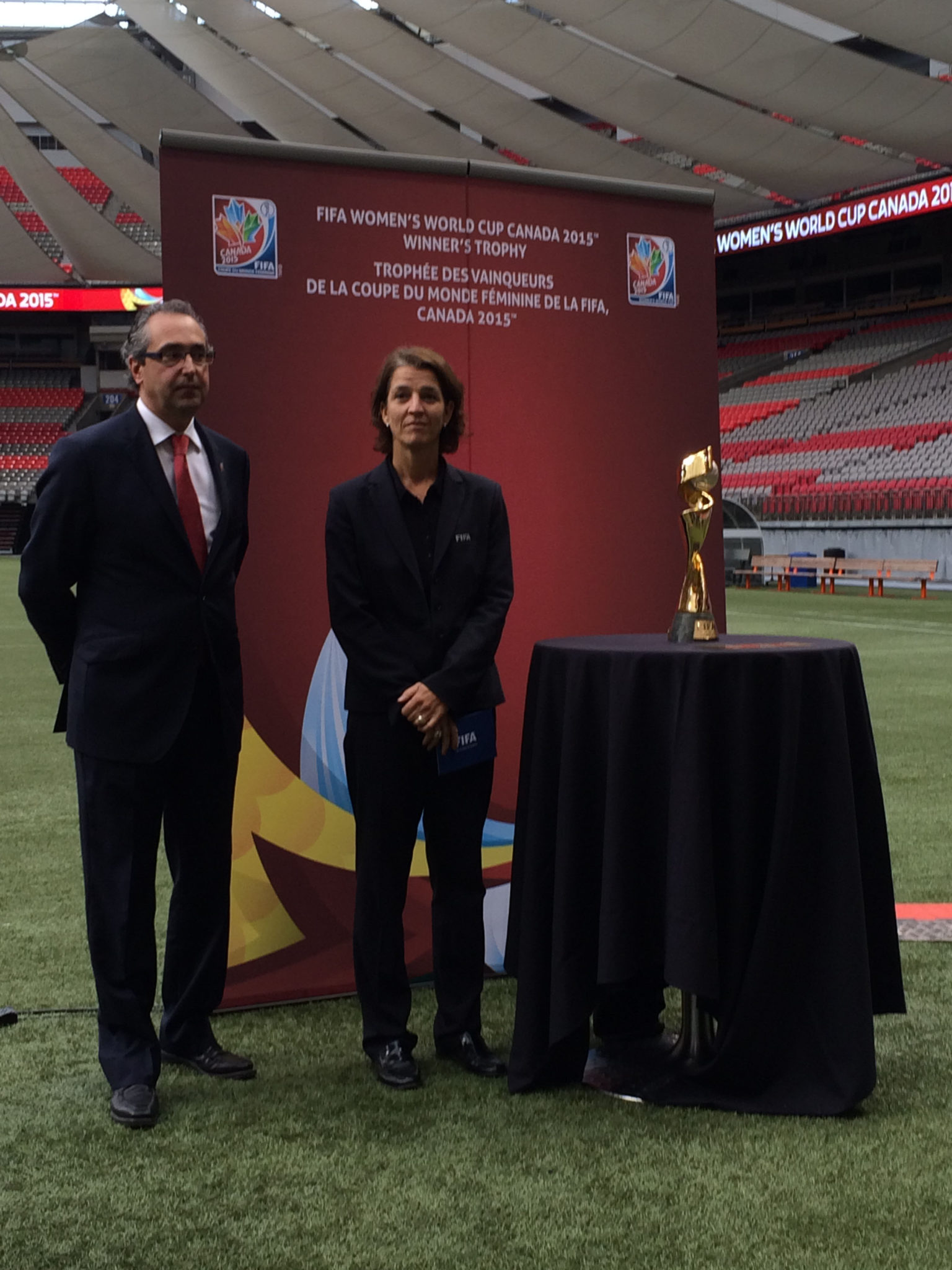 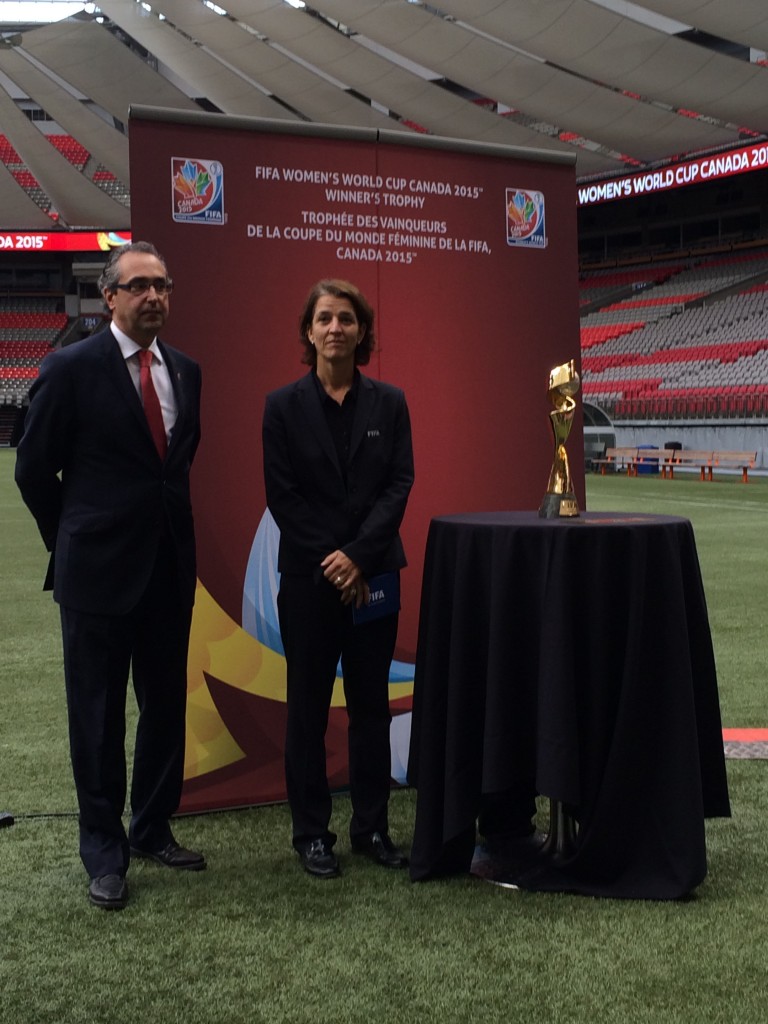 Peter Montopoli and Tatjana Haenni with the World Cup trophy at BC Place in Vancouver, site of the 2015 World Cup final. (Photo Copyright Harjeet Johal for The Equalizer)

VANCOUVER, British Columbia – The FIFA Women’s World Cup site inspection and stadium tour came to a close on Tuesday at BC Place in Vancouver, the site of next year’s World Cup final.

FIFA deputy director of the competition division and head of women’s competitions Tatjana Haenni, as well as National Organizing Committee CEO Peter Montopoli were bombarded with questions concerning the use of 2-Star artificial turf as they visited all six venues across Canada in preparation the World Cup, which kicks off in June.

A group of over 40 women’s players and their lawyers has brought the case to the Human Rights Tribunal of Ontario, but FIFA isn’t flinching. At every stop in Canada, Tatjana Haenni has reiterated and driven home the point that artificial turf is here to stay and it will be the surface used at the World Cup.

“We have visited six host cities and for now that’s our last stop in Vancouver, and in all cities we have looked at artificial turf in the stadium and on training sites,” she said. “For FIFA, together with the Canadian Soccer Association, that decision was taken a while ago. It was and is clear since a while ago, so we’ve continued our plans to host all those matches on artificial turf.”

Site inspections were conducted by a third party, FIFA says, along with Haenni.

Haenni refused to speculate on the future or what could happen if the players successful with their legal action.

“I can’t really say much on that one because I think we have to see what the future brings,” she said. “We don’t know where (to) go. For us I think it’s really important that we continue our planning. There’s still a lot of to do. We don’t want to risk any, let’s say mistake, or anything else in any other area of this big event. There are so many things to do and I really think that the Canadian Soccer Association is doing a wonderful job in promoting the event and bring it to the country.”

All certification steps for stadium pitches are expected to be completed by early 2015, according to FIFA.com.

Haeni reiterated in Vancouver what she said at previous stops on the tour, that “there is no Plan B.”

When asked if she was still playing today would she want to be playing on artificial turf, Haenni smiled and said, “I would.”

Montopoli has confirmed that Canada Soccer will be heading back to Cyprus next winter to officially compete in the 2015 Cyprus Cup. Canada had always hoped that hosting the Women’s World Cup would be something that would help gain entry into the prestigious Algarve Cup. However that hasn’t quite happened as Montopoli explains why.

“There were plans, but unfortunately that’s not our decision. There’s four countries that decide who’s in that competition and they decided for whatever reason, for sporting decisions to take certain countries. We’re on the sidelines from there, but were happy to be in the Cyprus Cup. If we every get a chance we’ll take a look at going back to into the Algarve Cup but it won’t happen in 2015.”

Canadians in the NWSL

The uncertainty concerning Canada’s involvement in the 2015 NWSL season is still clouded in mystery. John Herdman will have his players in residency camp or competition play until the first World Cup match. Players will be given some time off to visit with family and friends from now until June. The NWSL schedule and how Canada’s allocated players will fit in and play a part has yet to be determined by Canada Soccer and the NWSL according to Montopoli.

“I don’t know if we’ve really finalized anything with the NWSL concrete. The idea is that they might have an opportunity to play on the weekend and go to the match, play, and then come back into the national team environment. We would have to see which players they are, which teams, and how many matches. Maybe in the beginning of the season, but certainly at some point that would stop and that would be full-time into training with the women’s national team.”

Notes: The Canadian Women’s National Team are currently in their second week of residency camp as they get set to face World Cup holders, Japan on Oct. 25 in Edmonton, Alberta, and on Oct. 28 in Vancouver, British Columbia. The full training camp roster can be found here.