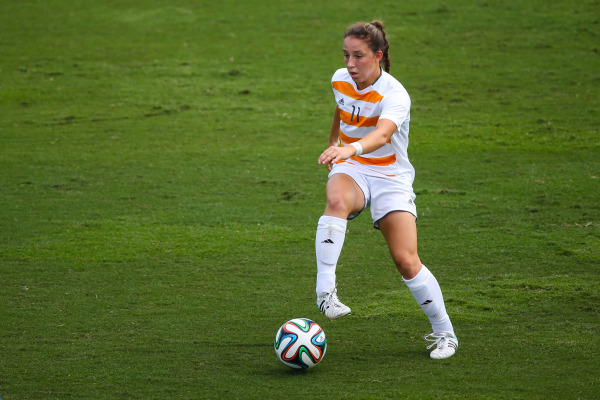 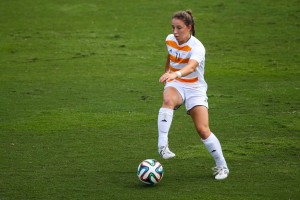 For University of Tennessee freshman midfielder Carlyn Baldwin, 2014 has been a year of late runs. The 18-year-old made the United States’ U-20 Women’s World Cup roster this past summer despite not being on January’s CONCACAF qualifying roster.

“It was kind of late run onto the roster. I was very blessed to get that opportunity,” said Baldwin, who made two appearances in the tournament. “I was really happy. It was a dream come true. I can’t really put into words. It was incredible.”

The U.S. fell in the quarterfinals, but Baldwin learned some valuable lessons from her time in Canada. “Every play counts like every second out there matters; one point in group play can make a difference. Quarterfinal games you just have to find a way to win.”

In between camps in preparation of the U-20 World Cup, Baldwin suited up for Braddock Road Stars Elite in the W-League a few times this summer. Braddock Road is a prestigious youth soccer club in Northern Virginia whose alumni include USWNT coach coach Jill Ellis and U.S. great Mia Hamm. Baldwin has played for the club since she was a U-11 player.

“I remember when I found out that Mia Hamm had played at the club. I was like ‘Oh jeez, that’s pretty incredible,’” Baldwin recalled. “ It’s definitely cool to be part of such a historic club and we’re just continuing to develop great players. We have great coaches there and playing with them in the summer was just a great way to continue my time there.”

The newly minted W-League team got off to a rough start and failed to secure a win until the fifth game of the 12-game regular season. At that point, getting into the playoffs seemed pretty unlikely. The team, however, went on a spectacular run in July to grab the second playoff spot in the Northeastern Conference.

While Baldwin wasn’t present for much of this push, she did play a role in getting it started. On July 5th, Braddock Road faced off against the New Jersey Wildcats. With 15 minutes remaining the team was down by two goals. In that last quarter-hour a total of four goals were scored, three by Braddock Road. The game resulted in a much-needed 4-3 victory for the Stars Elite. Baldwin scored one of those final three goals off a give-and-go in the 78th minute.

Baldwin was proud of what the team was able to accomplish this summer and hopes to return next year.

“The team did great…We didn’t give up, didn’t give up on our style at all and then slowly but surely the results starting coming. We trusted our coaching staff and it was a great, great run to get into the playoffs. For a first year in the league, that’s pretty incredible.”

If Baldwin’s college team is going to make it to the NCAA Tournament, she might need to be a part of a third late run this year. The Volunteers currently sit a 6-6-1 (1-3-1 SEC) with seven games left in the regular season. The team will need to win the majority of its remaining games to secure a bid.

The need for another push is fitting since the best way to describe the freshman might be relentless. Despite her diminutive size, Baldwin fights doggedly in the midfield for balls, often coming out on top. She’s appeared in every game for Tennessee so far although she missed the majority of preseason due to the U-20 World Cup. She’s also started all but one game for the Volunteers and is currently third on the team in minutes played.

No matter how the rest of this season plays out for the Volunteers, Baldwin is laying the foundation for a noteworthy collegiate career. Overall the future looks bright in Knoxville, Tenn., as fellow Virginia native and the No. 1 recruit in next year’s freshman class, Katherine Cousins, is verbally committed to the Volunteers.