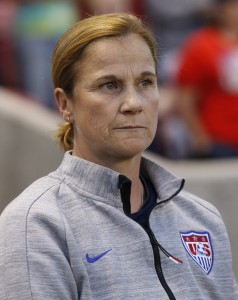 Jill Ellis is under contract through the end of the 2015 World Cup, with options to extend her deal through 2020. (Getty Images)

The U.S. Soccer Federation’s annual audit reveals that women’s national team coach Jill Ellis is under contract through July 31, 2015, with option that could extend her deal through August 31, 2020. The Women’s World Cup final is July 5, 2015.

Ellis has an annual base compensation of $185,000 to $215,000, with with incentive bonuses based on the U.S. women’s national team’s performances at the World Cup and the Olympics.

By comparison, U.S. men’s coach Jurgen Klinsmann makes $2.5 million in a deal the escalates over time. He receives bonuses based on the U.S. men’s national team’s performance at various international tournaments.

Also of note from the document dated Sept. 15, 2014, is that the USSF’s agreement to manage, govern, operate, advise and administrate the National Women’s Soccer League was extended from an initial end date of Dec. 31, 2013, to Dec. 31, 2014. However, the league is owned by its nine member teams.

There still is not a U.S. women’s national team collective bargaining agreement in place. The CBA expired on Dec. 31, 2012 and since March 2013 U.S. women’s players have been operating with U.S. Soccer on a signed Memo of Understanding in place of a full agreement.

Complete financial information for U.S. Soccer can be found here.

FIFA official: World Cup will be on turf, ‘no Plan B’
USWNT headed to Brazil for first time in 17 years