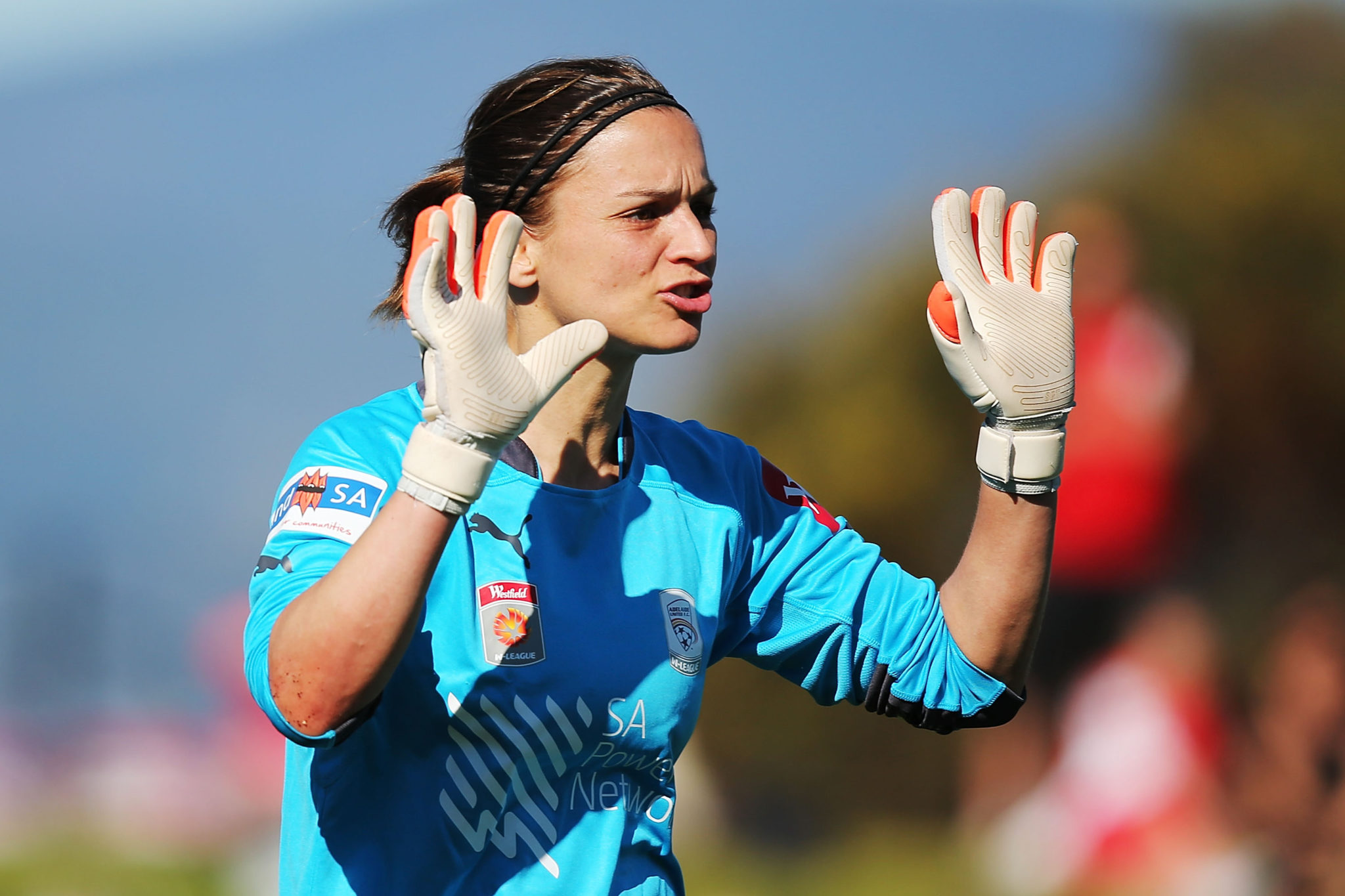 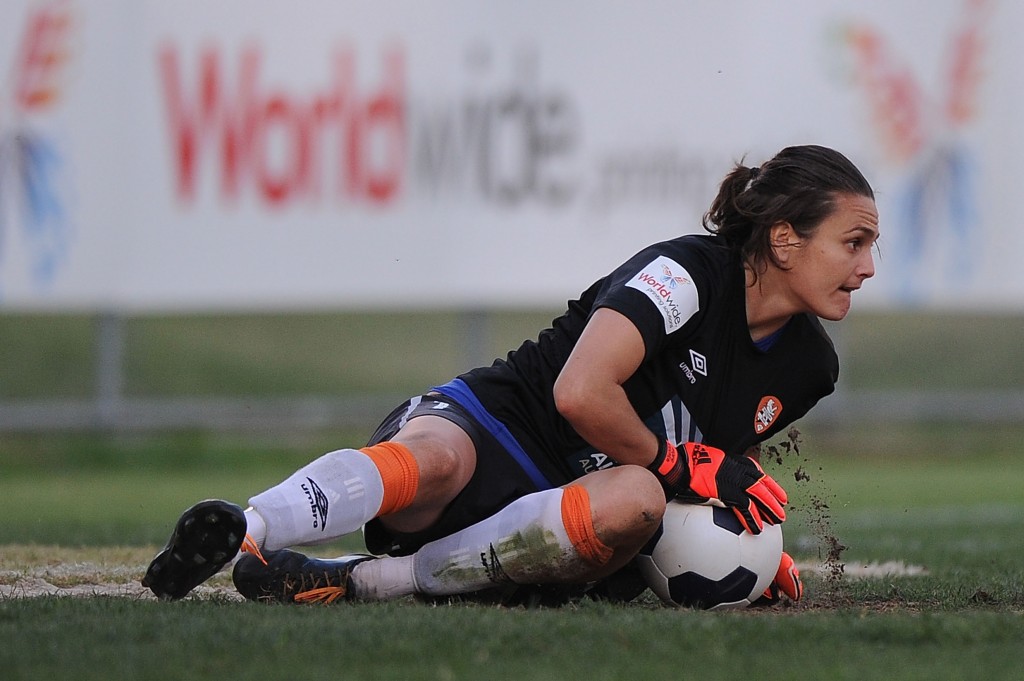 In this edition of the International Review, we look at the Week 3 games in Australia’s Westfield W-League, discuss some coaching changes for the Australian national team and Sydney FC, and talk with long-time Matilda’s and W-League goalkeeper Melissa Barbieri.

In Week 3, American Jasmyne Spencer scored her third goal of the season in Sydney FC’s 2-0 derby win over host Western Sydney Wanderers, before a league record crowd of over 3,084 (for a stand-alone game without a double header with an A-League side). Midfielder Amy Harrison scored the other goal for Sydney FC, who now leads the table on three wins and a plus-1 goal difference over Perth Glory, who are also undefeated. American Samantha Johnson also played for Sydney but Australian international Teigen Allen (ex-Western New York Flash) was suspended for the derby; she is expected to play next week against Melbourne. Seattle Reign midfielder Keelin Winters, who was named W-League Player of the Week last week, started and Kendall Johnson (Sky Blue FC) made her debut for the Wanderers.

Brisbane Roar won its first game of the season after two losses, disposing of the Newcastle Jets, 3-1, with Australian international forward Hayley Raso scoring a brace; she now has 10 goals in 35 career W-League matches. Portland Thorns and German international Nadine Angerer was in the net in her first game with the Roar this season. For the Jets, Americans Angela Salem, Katherine Reynolds and Tori Huster all played the entire match, as did Emily van Egmond (ex-Chicago Red Stars).

Reigning champions Melbourne Victory defeated Canberra United 4-2 away on Sunday, September 28. With two wins and 6 points, they face a crucial away match with leaders Sydney FC next weekend. Seattle Reign pair Lauren Barnes and Elli Reed played their first W-League games this season; Barnes scored Melbourne’s first goal in the 38th minute from the penalty spot, after Christine Nairn was fouled while dribbling in the box. Stephanie Catley (Portland Thorns) and Lisa De Vanna (ex-Washington Spirit) also scored for the Victory. Canberra’s American trio all played, with Lori Lindsey (Washington Spirit) scoring a wonderful goal from near the touchline for Canberra, while Stephanie Ochs lined up at forward and Chantel Jones was in goal. The game attracted a solid crowd of 1,018.

In other A-League News, Sydney FC named Daniel Barrett as their new head coach, to replace Alen Stajcic, who last week was named as head coach of the Australian national team after acting in an interim position with the Matildas since the spring. Barrett was an assistant to Stajcic during Sydney’s W-League championship season in 2012/13, and recently was head coach at the International Football School on the Central Coast, north of Sydney. Barrett and Stajcic worked in tandem in the derby win on Saturday, Sept. 27, and will again next week during a brief transition period, with Barrett taking over completely before their Week 5 match at Newcastle.

Stajcic last week was appointed full-time as the Matilda’s coach for the 2015 Women’s World Cup and the 2016 Olympic Games. Stajcic was selected after a search of domestic and international candidates. On an interim basis, Stajcic helped the Matildas finish second at the 2014 Asian Cup and qualify for Canada 2015, after Dutch coach Hesterine De Reus was let go after some player unrest and criticism of her style.

“It’s an honor to be appointed as full time head coach of the Westfield Matildas,Stajcic said. “I enjoyed the experience of working with the playing group at the Asian Cup earlier this year and I’m grateful to the FFA [Football Federation Australia] for giving me this opportunity.” 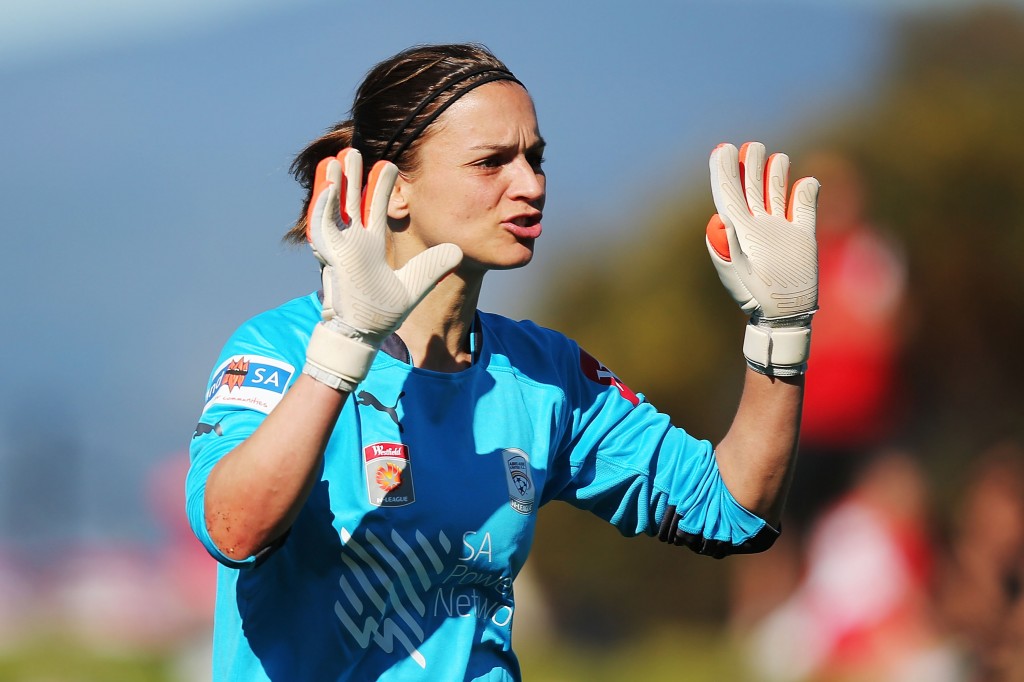 The Equalizer talked to Adelaide Reds goalkeeper Melissa Barbieri. The long-time captain of the Australian national team is one of the most inspirational and positive people you could ever meet. She has backstopped Australia to World Cup quarterfinal berths in 2007 and 2011. Though Lydia Williams has been in goal more of late for the Matilda’s—due in part to Barbieri’s maternity leave—Barbieri is still a possibility for the World Cup team next summer (Williams also suffered a serious knee injury this summer). Barbieri, the 2008 and 2014 W-League Goalkeeper of the year, is in her second season with Adelaide and helped them to their most wins ever last season (3). She has previously played for Melbourne and Newcastle.

The original W-League operational model was to survive on independent funding, primarily from the federal and state governments, while leveraging each Australian-based A-League men’s side for their name recognition and marketing support. The lone exception is Canberra United, as there is no A-League side in the capital city. One team’s media director explained a few years ago that most A-League clubs were not making money and could not afford the added expense of running a W-League franchise. Barbieri has been a fixture in the W-League since its beginning seven years ago and can reflect on how well this model has worked.

“The league is 10 times as strong as when it first started,” she said. “The players are better with a lot more coming through; games are tighter and coaches are better. We have so much depth in our game now because of [the league].”

Barbieri mentioned the increase in imports from the first year, when Brittany Baxter [Timko] of Canada’s national team was one of very few who joined the league from abroad: “It’s been a tremendous help, giving teams the boost they needed to compete at a better level and showing Aussies what it takes to be a professional. It won’t be long till our league hosts the big names like Abby Wambach, etc. as Australia is somewhere everyone wants to visit. Our league has the best timing to combine training and holidaying. Our girls are our best advocates as well; many of our players are playing overseas and that means our game gets a great rap. They love our players overseas and now take our league more seriously because of our [player] products.”

Nadine Angerer is back for her second year and her former German teammate Ariane Hingst played with Newcastle in 2011/12. More Americans come each year and U.S. international Megan Rapinoe has appeared briefly in the league. Barbieri would have love to have played in America or Europe, but as she told me a few years ago, “there’s not a big demand for goalkeepers,” due largely to league quotas on foreign players.

Barbieri still sees work to be done in the W-League: “In some areas the league has gone backwards because, in the beginning, the A-League teams were a lot more supportive and a lot more helpful. Then as time went on their support diminished and the burden of the team fell upon the state associations and their resources are very limited. [A few] teams still have a strong backing from the men’s team such as Brisbane Roar.”

In five years’ time she hopes to see the players have a larger role in the public, in order to present models as “strong and empowered women.” She also wants to see “every club to be paying every one of their players, a full home and away season and more television coverage.”

The W-League’s success ultimately comes down to players like Barbieri, who advocated strongly for a national league in 2007 and 2008; she even had to play with a Victoria State men’s league club for a time to stay in shape for national team duty. Adelaide Reds are fortunate to have such a pillar of Australian women’s soccer in their nets.