Solo’s ability to play despite charges under scrutiny 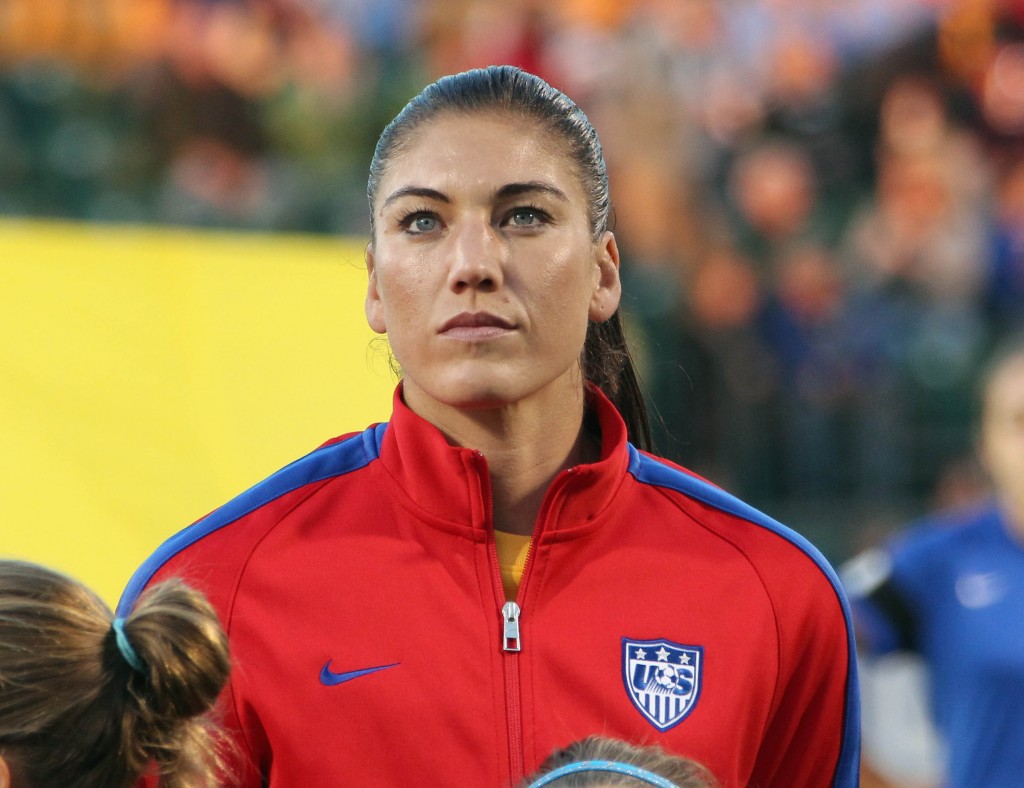 Hope Solo was charged on two counts of domestic violence in June, but only recently has her ability to play throughout the legal process come under fire. (Getty Images)

With domestic violence now at the forefront of the American media, attention is back on U.S. women’s national team goalkeeper Hope Solo, who is due in court on Nov. 4 for two charges of domestic-violence assault.

The charges stem from a June 21 incident involving Solo, her 17-year-old nephew and her half-sister. Solo pleaded not guilty to the charges.

Numerous major media outlets are now calling for Solo to be removed from the United States national team immediately, calls being shouted in the wake of the exposure over the last two weeks of the NFL’s bungling of several domestic violence cases.

[MORE: US Soccer reaffirms due process, sticks to decision to play Solo]

On Friday, Solo was suddenly “the domestic violence case no one is talking about.” People are “turning a blind eye” on the Solo case!

Except for the entirety of mainstream and niche media alike when it happened in June (including those … very … outlets writing those Friday pieces). The news on Solo’s alleged domestic violence was hardly ignored then. Every major media outlet in the country reported on it, giving it the red breaking news bar and top-of-the-headline-stack treatment similar to these NFL stories.

The cases “no one is talking about” are the 12 million people affected each year by intimate partner violence, according to the National Domestic Violence Hotline.

With domestic violence at the forefront of news, Solo’s ability to continue playing for the U.S. has come into question for many who are citing a double-standard.

The NFL’s handling of Ray Rice, Adrian Peterson and Greg Hardy – mainly Rice, because reports suggest a cover-up was in place – has brought into question why anyone would be playing while facing domestic violence charges.

There’s also San Francisco 49ers defensive end Ray McDonald, who denies the allegations of domestic violence and has been allowed by his team to play on through the legal process. The 49ers believe McDonald deserves due process, and it’s the same approach U.S. Soccer and Seattle Reign FC have taken with Solo.

But no one should be compared to the other. All of the allegations are serious, and all of the situations surrounding them are unique. Comparing the situations, as Amanda Hess at Slate points out, would be plain stupid.

As Jen Doyle points out, media discourse leads to a narrative that says there are two sides to every story. People sought out what that ‘other side’ is, and arrived at the conclusion that it must be Solo.

U.S. Soccer’s and Seattle Reign FC’s stance is on handling Solo is that they will act if necessary, i.e. if she is guilty. Innocent until proven guilty is a constitutional right. And if she is guilty, Solo faces up to six months in jail.

U.S. Soccer takes the issue of domestic violence very seriously. From the beginning, we considered the information available and have taken a deliberate and thoughtful approach regarding Hope Solo’s status with the National Team. Based on that information, U.S. Soccer stands by our decision to allow her to participate with the team as the legal process unfolds. If new information becomes available we will carefully consider it.”

Also Monday, ESPN’s Keith Olberman chimed in to further remind everyone about the charges against Solo, and how ridiculous it was that she was handed the captain’s armband on Thursday against Mexico to recognize her record shutout streak.

There’s no arguing that Solo being made captain on Thursday, in the face of allegations against her, is at the very least a tone-deaf move. So too was the decision to celebrate her taking aim at the record a few days after her initial court date (her trial is set for Nov. 4, after World Cup qualifying).

But to call for her suspension now – three months after the initial incident and very clearly in reaction to the NFL, which directly relates her case to those the NFL is dealing with – is ill-timed. That news cycle long passed; her court date is still six weeks away.

The facts in Solo’s case are still to be determined in the court of law. Three people know exactly what happened early in the morning on June 21, and all three claim to be victims. The police report indicates a drunken brawl that included Solo allegedly hitting her half-sister and 17-year-old nephew, and that nephew hitting Solo with a broomstick and pointing a BB gun at her.

What’s also known is that Solo is not Rice, Peterson or anyone else. Nor are any of those NFL players or their situations the same.

“All of this is to assert that the media’s relationship to women is itself violent. And as long as the day-in-day out struggle of women athletes—to win games, to set world records, to win appropriate support for their sport—remains the story that ‘no one’ is actually talking about, no one gets to indulge the fantasy that a woman athlete’s domestic assault charge is ‘the same’ as that faced by a multi-million dollar male athlete playing for a billion dollar business run by and for men.”