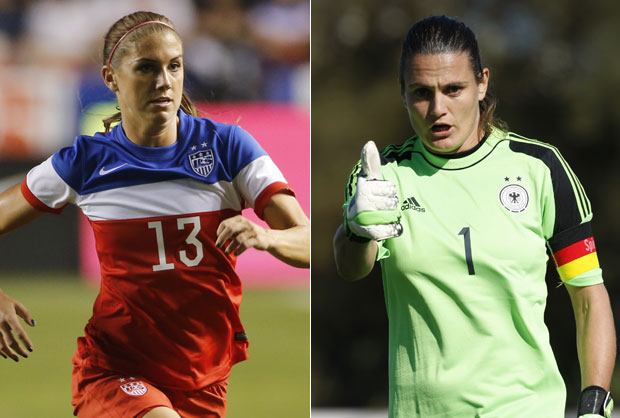 Let that sink in: It’s been 10 years since the last meeting, when the United States beat Germany in the semifinals of the 2004 Olympics, en route to the first of three straight Olympic gold medals for the Americans.

The world’s two most decorated teams have played plenty since – 29 matches all-time – including the 2013 Algarve Cup final, which the U.S. won.

Still, it’s staggering that there hasn’t been a game between the rivals at a World Cup or an Olympics in a decade. Part of that has to do with Germany’s shocking quarterfinal loss to Japan on home soil at the 2011 World Cup, which also kept the Germans out of the 2012 Olympics. And the U.S. had its own implosion at the 2007 World Cup, a 4-0 semifinal loss to Brazil.

But the rivalry still runs deep, and Germany goalkeeper Nadine Angerer re-ignited it last week with these comments to the Frankfurter Allgemeine Zeitung, a German daily newspaper:

“I’m now starting to get to know opponents in Australia or the States a lot better. Take the Germany national team, for example – we’ve not been able to beat the Americans in recent years because we’ve always paid them far too much respect. Now I know how little actual soccer quality they have beneath their outstanding fitness. I’ve also learn how fragile even a top striker like Alex (Morgan) really is, and that’s something I can pass on to my teammates at the World Cup next year.”

Angerer played with Morgan at Portland Thorns FC this past NWSL season, and they are expected to be teammates again in 2015. Morgan said on Wednesday that she saw the comments, but tried not to make too much of them.

“Initially I took a very defensive stance, but then after seeing the quotes and thinking about it, I think that she’s entitled to be able to say those sort of things,” Morgan said. “I think we became friends when we were in Portland, and I think there is maybe a mental block that the Germans have against us, because they have not beaten us in many years.

“So maybe that is her way of trying to help out her teammates and ease them into the next game against us. I’m not sure, but I think it was more of a media move than what she really feels. I felt like we got along really well in Portland, so I obviously respect her very much, and I’m looking forward to playing them just to see how much that mental block has gone away.”

That next meeting could come in next year’s Algarve Cup, if not at the World Cup, which each team expects to win.

The U.S. is unbeaten vs. Germany in their last 11 meetings, with Germany’s last victory coming in the 2003 World Cup semifinals in, you guessed it: Portland.