The Lowdown: XI ideas for a better NWSL 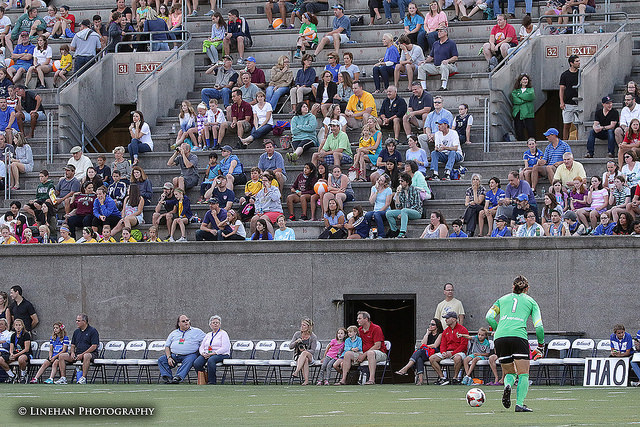 The National Women’s Soccer League has two seasons in the books and it is time to turn attention towards the all-important third. The importance is two-ply. First, the league will have to share, if not cede altogether, the summer spotlight to the World Cup. Second, by playing a third season, NWSL will match the lifespan of its two predecessors, WUSA and WPS. There have already been scheduling plans discussed for 2016 so there is optimism on that front.

In the meantime, here are XI ways NWSL could stand to get better in both the short and long term. Some of these ideas will require money while others will require little more than effort. Maybe a few are outlandish and maybe some others are already in the works behind the scenes. Nevertheless here is the list:

Stop being a cause and start creating sports fans: The two championship matches should be a snapshot for this. At both games, one in Western New York and the other in greater Seattle, thousands of fans packed the stadium to root on their team. A good many of them were grown-ups, sans children, there for the event. There is nothing wrong with trying to attract kids to NWSL matches, but the genesis of a fan base will come from adults. With time and some luck those adults will naturally pass NWSL fandom down through the generations. Major League Soccer, after nearly two decades, is beginning to see the fruits of this grinding but effective process.

It is important to remember that kids, by themselves, are not consumers. They need adults to pay for tickets and merchandise as well as organize trips to games. Furthermore they grow up, and when they do they won’t want to be attending NWSL games if it is viewed as a kids’ activity.

The Rose City Riveters, Portland’s group of supporters, sent a sizeable group to Rochester in 2013, as did the Blue Crew to Seattle last month. the latter was far from enough people to call itself a fan base, but that is the type of following and passion NWSL and its clubs should be dedicating their resources towards trying to attain.

Upgrade webcasts: Don’t get me wrong, the free webcasts are great. The NWSL is a leader in the realm of offering free access to games. But it won’t be long before offering the games will not be enough. In 2014 promises of high-definition quality for all did not come to fruition. Camera angles were awkward and often changed with no rhyme or reason. Too often, commentators did not display enough knowledge of the teams and their players. (Writers’ note: I was part of the Sky Blue FC webcast team and so I fully realize the difficulty of keeping up with the teams and players. We can all do a better job.)

Another challenge of offering the matches on webcast is that while it is bliss for the diehards it is next to impossible to attract drive-by viewership. Could enhanced production quality allow NWSL to latch on in some way to the ESPN3 package that will be offered for MLS beginning next season? (And allow multi-game viewing?) Are there other creative ways to draw visitors to the YouTube? If there are NWSL needs to find them.

Keep television interested: There is an argument to be made that in its nascent stages, NWSL would be better off without television. Even if that is true, any sort of long-term stability will have to include a significant television presence. And since FOX and ESPN have both seen fit to show matches over the first two seasons, the best NWSL can do is to keep the TV folks interested.

Player information: The league needs to maintain a more effective list of players on its site. Currently the site has no specific link for players. The team links include rosters, but clicking on each player takes you to a random page about disciplinary points. There is no centralized area to find out information on players and perhaps more importantly, nowhere to look up how players were acquired by their teams and whether or not they count toward the international limit.

Stats and box scores: Player statistics are available but difficult to navigate. The same goes for box scores, which do not always change to reflect corrections. Fans love stats and love to go back and get information about old matches. There is currently no outlet for this in NWSL. The league site can become just that.

Other information helps too. How about a draft section including the results of previous drafts and a list of trades affecting future ones? 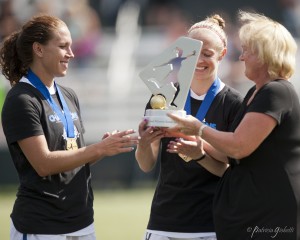 Fix the referee problem: There is not a league on this planet, soccer or otherwise, where the officiating does not draw intense criticism. And advent of frame-by-frame replay and high definition only puts the arbiters under more scrutiny. It will never be perfect. But it can be better—much better—and not only as it pertains to performance.

It is no secret the performance of the referees and assistant referees can be better. Whether it be calling penalties for balls played off defenders’ hands tucked into their bodies, allowing games to get out of hand by holding onto cards like they were gold, or the general inability to keep up with the speed of the game, the level of NWSL officiating is poor. The catch-22 is that the league does not directly control the referees, and assignments are often regionalized to save money. That said, NWSL needs to work with PRO (Professional Referee Organization) to get this situation trending in the right way.

There is more they can do, though. Rather than keeping quiet when match discussion is dominated by an official’s call week after week, NWSL could do themselves a favor by getting in front of the stories. No NFL team likes receiving letters from the league telling them an important call was missed. But it does go a long way towards ending conversation about it, and it offers the general perception that someone is watching. Bad calls are going to happen, but the league has the ability to react in a positive way 100 percent of the time.

General transparency: Three days before the Spirit’s playoff game in Seattle, Spirit head coach Mark Parsons divulged during a conference call that Lisa De Vanna would not be traveling with the team, and would not likely travel if the team made it through to the final. This was big news in NWSL circles. And it was a very good day for the league. The women’s soccer corner of the Twitter world lit up with discussion of De Vanna’s omission from the Spirit travel roster. It may not have been the biggest news of the year but it became a talking point because someone (Beau Dure) asked a question that triggered Parsons’ answer.

No one would have blamed Parsons had he elected not to tip his hand about the travel roster. But the country’s biggest sports leagues have become year-round operations based on an ability to create news when nothing is going on. Many NWSL clubs seem to take the opposite approach and do their best to squelch news even when much is going on. One team insisted an advanced list of questions for its head coach, and then refused the interview because it was a sensitive time for the club. Another took what could at best be described as a passive effort to make players available for a retrospective piece that would have been entirely positive.

The NWSL is filled with interesting players, stories, and news items. The better the league and clubs get these stories out and into the public eye the better.

Internationals: This likely will not happen until 2017, but the one thing NWSL lacks where its predecessors thrived is attracting elite international players. There are some outstanding internationals on board but the truth is there is more money, stability, and FIFA friendly scheduling available elsewhere. I trust the owners are doing their best here and no one player is worth mortgaging the financial future of a club. But this is an area that could use some improvement.

Treat yourself like a sports league: Much of what has already been written falls under this umbrella. It cannot be overstated, though. Fans will not be drawn to NWSL as a sports league if it does not treat itself as such. There have already been significant strides made in this area like the early announcement about the 2015 schedule structure. The Dash-Thorns match on ESPN2 with Adrian Healey on the mic and a raucous crowd at Providence Park was a solid example of what women’s soccer can become on a weekly basis.

Other areas are sorely lacking. The Reign did a remarkable job of upping attendance thanks to a quality roster and downtown move. But you can bet they turned off some would-be ticket buyers with a website that barely scratches the surface as a simple outlet for tickets and merchandise. There is not a single statistic, box score, or player bio anywhere to be found.

Being a legitimate sports league also means embracing the positive while effectively navigating the bumps along the way. It means more timely and accurate injury reports and that all players actually be available for comment after matches. It means understanding that with competition comes winning and losing and that losing a few games is not a good enough reason for a team to go MIA and close itself off from fans and writers.

Make the final an event: In my utopia, the league selects a site for the final in March and then spends the next six months pushing the heck out of it so it sells well no matter the teams. But that is so far from happening it isn’t worth much discussion.

What is worth discussion is making the final in its current format into something of an event. Next year’s two-week break following the semifinals will be an ideal time to kickstart this initiative. The first two years have been a balancing act between the game being a team event and a league event. The results have been a bit messy at times.

The league needs to take control of the final and treat it like a big deal. Yes they started with a bare bones, no frills type of week for the first two years. It’s time to step up the action a bit. The trophy can make an appearance or two around town. Fans can be invited, or charged, to watch the teams train the day before the match. The Best XI and MVP can be announced at a strategic time during the week so as to attract maximum attention. The league should be fighting and clawing for a longer postgame show and maybe even another window somewhere along the line to help preview the match.  Whatever the specifics, attending the final as either a journalist or fan of the home or away team needs to start becoming a bigger deal than it has been so far.

In 10 years time the NWSL Championship should be an absolute, can’t miss event for domestic women’s soccer.

Do what other leagues don’t do: Finally, NWSL is in its infancy, and has opportunities to take the lead in some areas where their graybeard competition tends to be late to the game. WPS was effective in using Twitter to disseminate information and gather supporters. Other leagues have caught up in that area, but there are other areas NWSL can thrive.

There are certainly many more qualified than me to come up with new and better ideas. But I’m convinced there are ways for NWSL to distinguish itself from other leagues as it continues to grow and hopefully survive and thrive well beyond that third season.