Perez sisters dream of playing together for Mexico 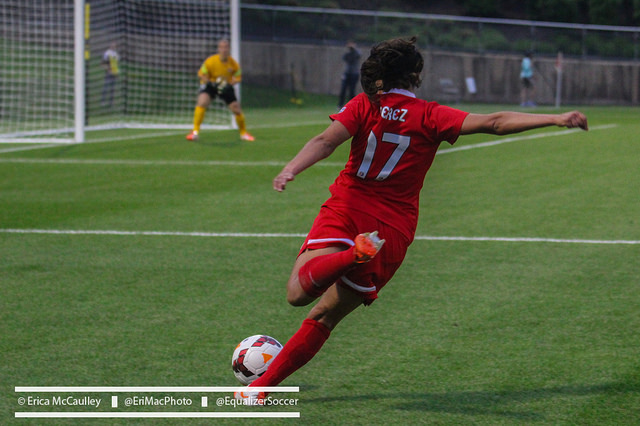 No. 17 is shared by both Veronica and Amanda Perez. Veronica wears it professionally for the Washington Spirit, and internationally for Mexico. (Photo Copyright Erica McCaulley for The Equalizer)

Their passion for soccer led them to share the same university and even the same jersey number. Ultimately, the Perez sisters hope to someday share the field with the Mexican national team on a regular basis.

Veronica, the elder of the two at 26 years old, played for the University of Washington Huskies from 2006-2009. During her playing days, she notched 21 goals and 11 assists. In her final two years as a Husky, she became an exciting player to watch.

“She’d draw 3, 4, 5 players and she’d find different ways to beat them,” Washington head coach Lesle Gallimore recalled, “Most of the time she was feeling it on and off the ball, scoring goals for us and finding ways. You let her go and become that creative player she is and there’s just a different level to how she performs.”

After graduating from Washington, Perez suited up for the Seattle Sounders Women in 2012 and led the USL W-League team in scoring. Currently, she plays professionally for the NWSL’s Washington Spirit.

Amanda, meanwhile, is in her sophomore campaign with the Huskies. She admits it can be “little annoying” attending her sister’s alma mater particularly when people jokingly call her Veronica. For the most part, the 20-year-old doesn’t mind it, calling her older sister her biggest role model both on and off the field. She’s following in her sister’s footsteps while simultaneously carving her own path. 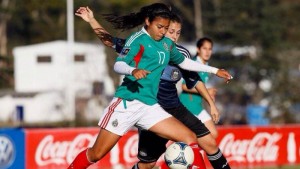 Amanda Perez has extensive experience with Mexico at the youth level. (Photo University of Washington athletics)

Both sisters described Washington as another family. Although her playing time with Huskies ended five years ago, Veronica still has strong relationships with Gallimore and associate head coach Amy Griffin. In fact, Veronica has served as a volunteer assistant coach for the Huskies at times since graduating.

Veronica is best known for scoring the game-winner in one of the biggest upsets in women’s soccer history. Her goal in the 2010 CONCACAF World Cup Qualifying tournament semifinal punched Mexico’s ticket to the 2011 World Cup and forced the United States into a two-leg playoff with Italy to earn a spot.

“When I scored that goal I blanked out,” Perez admits. “After all the commotion the first thing was ‘OMG we’re winning,’ then I remember thinking we have 65 more minutes to keep playing our game and hold onto our lead against the best team in the world.”

Amanda isn’t a stranger to representing Mexico at the international level, either. She’s appeared in three youth World Cups, most recently the U-20 World Cup that was held in August. Her last youth World Cup was a bit different than the previous two.

“I was a lot more excited and I think prepared and I had a different role being a leader on the team because we had a lot of players that had never gone to a World Cup,” Amanda said. “It was a lot of fun always representing your country is something exciting, especially at a stage like the world cup where every team is at a really high level.”

Last year, the pair became the first sisters to appear for Mexico when Amanda earned her first senior team cap during the 2013 Algarve Cup.

“It was really cool getting to experience that with her and just learn from her and play with players with such amazing ability,” the younger Perez said about earning her first cap with her older sister on the field.

Coincidentally, as youngsters the Perez sisters were coached by the same coach who worked with the first set of sisters to suit up with the U.S. national team, Lorrie and Ronnie Fair. That coach, Simon Ireland, is also the reason the two don the No. 17 jersey.

“Our youth coach was an amazing player and he was really influential to both her and my soccer careers and I think we just thought that he was an amazing person and player,” Amanda said about wearing their jersey number selection.

Although there are a number of similarities between the two sisters, they are very different types of players.

Although they want to play together someday, for now, the sisters enjoy watching each other play.

“I’m proud of her and think it’s cute when I get to cheer for her and see her running around in the No. 17 jersey,” Veronica said. “ I go to every game I can, and if I can’t, I watch online.”

Last month, Amanda and her Washington teammates got to watch Veronica play for the Spirit in a NWSL playoff game against the Seattle Reign, which boasts fellow Husky alums Hope Solo and Kate Deines. Veronica entered the game as a substitute in the second half. Less than three minutes later, she scored a goal which at the time gave the Spirit a 1-0 lead. Seattle eventually won, 2-0.

Amanda, of course was ecstatic for her sister and in her words, “went crazy.” While the other current Huskies cheered Veronica as well, Amanda said she was the only one that stood up and yelled. Amanda’s enthusiasm drew the ire of Reign fans — at least momentarily. For her efforts, Amanda earned a chorus of boos and some unwanted popcorn. That is, until she explained it was her sister that scored. Then, some of fans gave her high-fives.

While it’s impossible to say what the future holds, the sisters will continue to support each other. If they do end up sharing the field again, Amanda is going to have to pick another jersey number. Although she claims to have started wearing the No. 17 first, Veronica’s not giving it up.