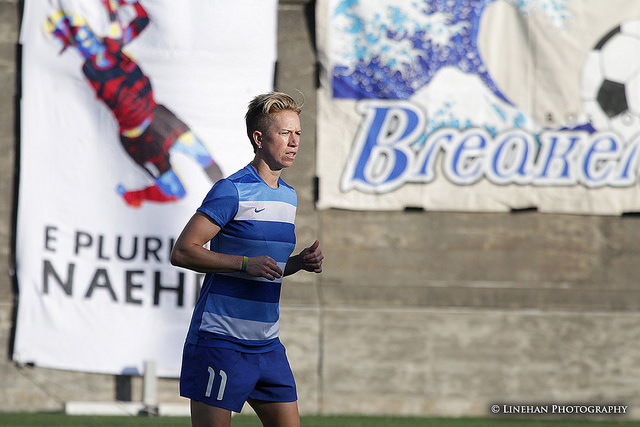 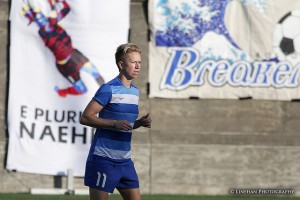 Joanna Lohman’s Breakers career ended Monday when the Spirit claimed her off waivers. (Photo Copyright Clark Linehan for The Equalizer)

The NWSL announced the results of the waiver process on Monday and four players now have new addresses.  The Washington Spirit claimed two players, Joanna Lohman from the Breakers and Lydia Williams from the Flash.  Also claimed were Danesha Adams by the Thorns (from the Spirit) and Rafaelle Souza by FC Kansas City (from the Dash.)

Lohman saw her playing time dwindle as the season wore on, and will have another chance to play in Washington where she makes her offseason home.  The Silver Springs, Maryland native played for the Washington Freedom during the 2009 WPS season, and in the W-League for D.C. United Women, the forerunner of the Spirit, in 2012.

Williams was the starting goalkeeper for the Flash until she tore her ACL on July 12 against the Spirit, who now own her NWSL rights.  She will be nine months out from the injury when the 2015 NWSL season begins.  She is also part of the Australian national team that will participate in the World Cup next summer.

Adams heads to Portland where she will be reunited with Paul Riley for whom she played in WPS with the Philadelphia Independence.  In 2010 Adams scored the goal in extra time against the Breakers that vaulted the Independence into the championship match.  Her NWSL career began with Sky Blue FC in 2013.  The Dash grabbed her in the expansion draft before flipping her to the Spirit.  Adams also played for the Chicago Red Stars in 2009.

Souza was the 10th pick in the 2014 draft by the Dash and played 507 minutes over 16 matches.  She has one cap with the Brazilian national team.

Eight other waived players were not selected and are now free agents. Angie Kerr sent this tweet, expressing gratitude for her two seasons with the Thorns and suggesting it could be the end of her career.

Very grateful for my time @ThornsFC You @PDXRivetersSG were incredible! I couldn't have dreamed of a better city to finish at! #newchapter